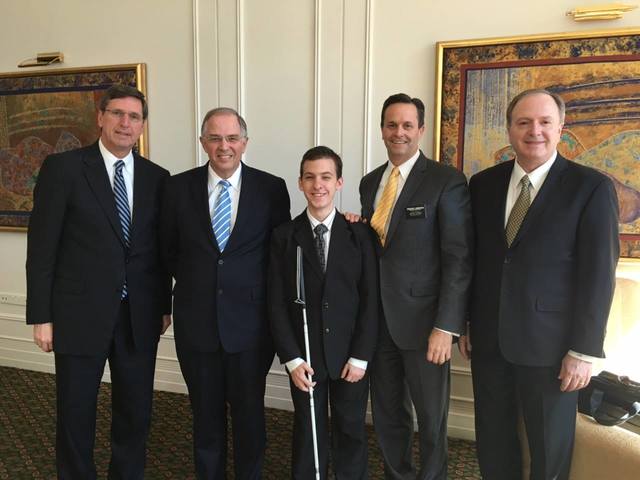 While visiting missionaries on his tour of the South Pacific, Elder Andersen met men and women from over 25 countries. In a recent Facebook post, Elder Andersen praised these young and faithful Saints, but then he went on to praise another group, those who are unable to serve missions for physical, mental, or emotional health reasons:

"There are many young men and women who are willing and ready to serve, worthy in every way, but because of health reasons are unable to take on the full rigors and responsibilities of a two-year or 18-month mission. While they are honorably excused from missionary service, these young men and women are equally devoted disciples of the Lord. 'Eye hath not seen, nor ear heard, neither have entered into the heart of man, the things which God hath prepared for them that love him' (1 Corinthians 2:9)."

He then went on to describe the incredible story of one such man from Australia, Grant Campbell:

"Grant Campbell is one such young man. Living at home and serving in his home city of Brisbane, Australia, Elder Campbell served in a Church-service special assignment for 16 months.

"Grant Campbell was born with congenital varicella syndrome, a medical condition that has resulted in numerous health challenges. At different points in his life, medical specialists declared him blind, concluded that he had brain damage, and asserted that he would be paralyzed. Brother Campbell and his family held steadfast to the many blessings pronounced in his behalf as he worked diligently throughout his life to improve physically. He progressed from wheelchair to walker, walker to crutches, and finally crutches to walking on his own. He worked hard in the gym to gain strength and balance.

"In spite of the many challenges facing him, Elder Campbell has been able to develop his talents and contribute to the building of the kingdom of God, serving as a Church-service missionary in the Australia Brisbane Mission from August 18, 2014, to December 24, 2015. During his valuable tenure, he completed many essential technology initiatives, including creating a virtual temple tour program that was used by missionaries during a period when international dignitaries were visiting the grounds of the Brisbane Australia Temple. In all of his work, he served with devotion and discipleship.

"How grateful I was to meet Grant and express to him my love and admiration and the appreciation of the leadership of the Church. We don't get to choose many of the challenges that confront us in our mortality, but we are able to choose how to respond to them. When I meet someone like Grant who moves forward with faith in God and confidence in the promises of the Savior, I find courage to better face my own mortality.

"'These things I have spoken unto you, that in me ye might have peace. In the world ye shall have tribulation: but be of good cheer; I have overcome the world' (John 16:33)."