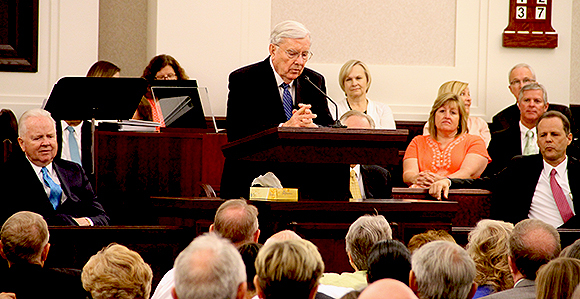 Elder Ballard: Today’s Temples Will Be Used in the Millennium

During a devotional to temple workers last Sunday, Elder Ballard shared how temples built today will be used to aid the salvation of others during the Millennium.

In a time of unprecedented access to the blessings of a temple—with 156 found throughout the world and many more in the planning and development stages—Elder M. Russell Ballard of the Quorum of the Twelve Apostles declared that the Church would continue to build temples.

“We're building these temples, not only for us in this moment of our history, but we're building temples which will be used during the Millennium when this great work will be carried on in the house of the Lord . . . under the direction and supervision of the Lord Jesus Christ Himself,” Elder Ballard said during a devotional to temple workers on Sunday, June 4. “That's going to be a wonderful thing.”

More than 2,700 workers in the Mount Timpanogos Utah Temple and their friends and families were invited to attend the special devotional which originated at a stake center in Lehi and was broadcast to two others. An estimated 3,000 individuals from 66 stakes throughout the temple district filled the three meetinghouses to hear counsel and encouragement from the apostle.

In his remarks, he shared some “very tender experiences” from when he supervised South America shortly after being called to the Quorum of the Twelve Apostles in 1985.