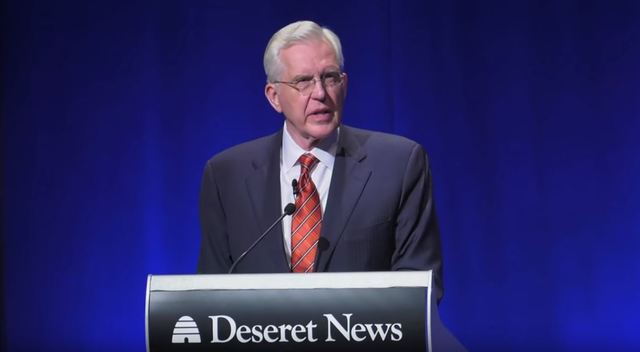 Elder Christofferson Shares Why Watergate Made Him Question His Profession: "It Was Like a Punch to the Gut"

During the Deseret News event "Integrity & Trust: Lessons from Watergate and Today," Elder D. Todd Christofferson detailed the experience that "put an end to [his] life of crime."

At around 5 years old, Elder Christofferson snuck to the grocery store across the street and stole a candy bar—an incident that might have passed into obscurity if not for what happened next.

"My mother found me a little later with the evidence on my face—chocolate it was," Elder Christofferson says. "She carried me back across the street with a dime she loaned me to pay that I had to earn back afterward and in tears and almost fear of prison I confessed."

From that young age, Elder Christofferson learned the importance of honesty and integrity, a lesson remerged later during his days as a law clerk for Judge John Joseph Sirica.

"The Watergate experience taught me the importance of integrity and trust like nothing else—a defining experience that came to me fresh out of law school," Elder Christofferson says. "As Watergate began to unfold during my first months with Judge Sirica, I began to have doubts about my choice of profession. G. Gordon Liddy was a lawyer and a key player in that break-in and the plumbers unit . . . John Mitchell, the Attorney General of the United States, and others. But as time went on I chose to look at others in that profession that gave me the courage and the hope that I had chosen well."

Elder Christofferson reflected on the courage of Judge Sirica and lawyers involved in the trials who worked with integrity and honesty in their profession. As the law clerk to Judge Sirica, Elder Christofferson was among the first to hear the infamous Nixon tapes. "To hear those tape recordings . . . was a rare opportunity," he says, recalling the moments he heard the president of the United States conspiring to distribute $1 million without it being traced. "I remember the shock, frankly, that both the judge and I felt in that moment. We still harbored the hope, maybe we were naive, that the president was not involved himself . . . but to hear that and the see his overt, direct, willing participation in a conspiracy to obstruct justice was disheartening to say the least. It hit the judge very hard. He said it was like a blow to the gut, a punch to the gut. This is from somebody who had an amateur boxing career before he became a judge of a lawyer, and he knew what he was saying. I felt the same."

Despite having "no heart to do anything else for some time," Elder Christofferson found encouragement through the inspiring, upright government leaders he met during that same time period.

"Out of that experience, I resolved to be more committed to the teachings of my youth, recognizing that people can go wrong," he says. "I have been anxious since that time to promote those values that I was blessed with and the traits of integrity as broadly as I can, especially among the rising generation."