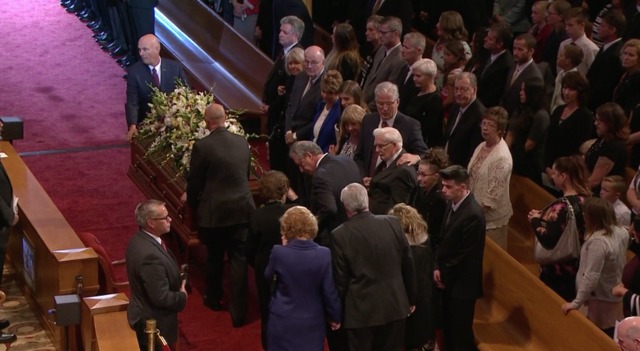 Church leaders gathered for the funeral of Robert D. Hales on October 6, sharing their memories and fondness of the former apostle, and even a never-before-told near-death experience.

Elder M. Russell Ballard, President Russell M. Nelson, and President Henry B. Eyring all spoke of their experiences with Elder Hales, recalling his "New York bred candor and wonderful sense of humor" as well as his dedication as an apostle.

Throughout his more than 40 years of Church service, he followed the Lord no matter the price, even giving up his business career to become a mission president.

"He was a legend in the business world in his own as a 42-year-old, but then a phone call came from the prophet of God," President Eyring shares.

Elder Hales's deepest desire was to "cherish and care for Mary," his wife, President Nelson shared.

When faced with the risk of losing a master's degree to take the calling of elder's quorum president for his ward, Mary demonstrated her faith alongside her husband's in the Lord, saying, "I'd rather have an active priesthood holder than a man who holds a master's degree from Harvard."

During the last decades of his life, and throughout his time as an apostle, Elder Hales suffered from health complications and, in 1991, experienced a heart attack.

Often sitting next to him in general conference, Elder Ballard shared the depth of devotion Elder Hales had even while faced with health complications.

"I've witnessed the great courage and complete dedication of Robert D. Hales," he says. "Many times I reached over, touched his arm, and held his hand, and, in a small way, felt the pain and difficulty he was experiencing."

Elder Nelson also had a special connection to the former apostle, having stood next to the surgeon who performed his open heart surgery.

Though some may have known that Elder Hales suffered from health complications, not many knew of a near-death experience President Eyring witnessed.

"I was called to the hospital on a summer afternoon with the information he would be coming soon on an ambulance," he shared. "I learned that he had been playing golf and felt that something was wrong. His playing partners, knowing his history of heart troubles, urged him to go to the hospital. He declined. He wanted to make a long putt, which he did. But all was not well.

"I was standing with Mary in the hospital when he was brought in. I stood with her while they took him, apparently unconscious, to an adjoining room. The doctor came out to say that he feared the worst. I could see through the doorway that medical personnel were attempting to save him. After some time the doctor came out to ask me to come see Elder Hales. He was lying on his back. He opened his eyes wide, reached out to take my hand, gripped it hard, and said, 'They made me come back.'

"Later, he told me that he retained no memory of that moment. I don't know if he was deceased for a brief time that afternoon or if it was a dream. But this I do know: he felt in a moment of intense testing that he was supposed to do something difficult and he was loyal to the command he received. For me, it was another moment, just one of the many I had with him when whatever the cost and how difficult the command, he was loyal to his family and friends, to the Lord, and the Lord's prophet."

Throughout his life, Elder Hales demonstrated his complete loyalty to the Lord. Whether it was receiving callings, risking a master's degree, or suspending a successful business career, Elder Hales showed his love for the Lord and others.

And at the end of his life, he even gave his last bit of strength for others and his calling as an apostle.

"I saw that love and loyalty just weeks ago," President Eyring said. "Elder Hales was laboring over the talk he was assigned to give at general conference. He wanted with all his heart to bear his sure witness once again of the Lord Jesus Christ. The effort was so great that his strength began to fail. He had gone to the limit and beyond of his earthly ability to keep his commitment to serve the Lord. I saw in his example again the truth that 'Greater love hath no man than this, that a man lay down his life for his friends.'"