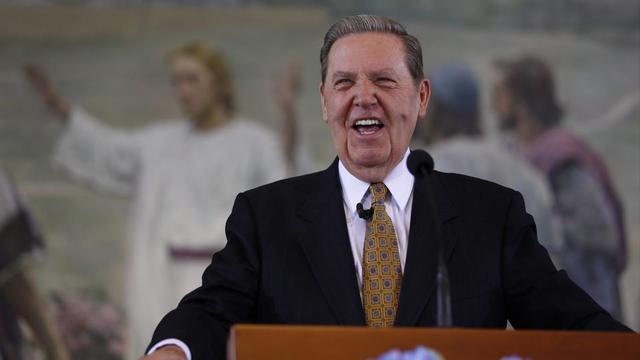 What emerges from that special association—from feelings of safety and peace, of belonging and happiness and heavenly help—is an inexorable sense of purpose and direction. Some have felt the fears and frustrations of life more than others, but all of us feel them a little, and in such times we need the gospel compass to remind us who we are and where we must go.

Blaise Pascal, probably France's most notable child prodigy of the last three centuries, reflects in an extreme way what many men have felt when unaided by gospel truths. He wrote of his very gifted life, "When I see the blindness and wretchedness of man, when I regard the whole silent universe and man without light, left to himself, and, as it were, lost in this corner of the universe, without knowing who has put him there, what he has come to do, what will become of him at death, and incapable of all knowledge, I become terrified, like a man who should be carried in his sleep to a dreadful desert island and should awake without knowing where he is and without means of escape" (Pensees, XI, 693).

Contrast that psychic turbulence with the serenity we saw while standing with our childhood playmates as they laid their first-born child in the grave. This beautiful little thirteen-year-old girl, born just ninety days after our own first child, had fallen victim to Cockayne's syndrome a half dozen years earlier. There is no way to adequately describe the deterioration of that little body now gone. Nor is there any way to tell the patience and the pain of those parents as they carried legs that could not walk and finally fed with an eye-dropper a mouth that could not swallow.

But there was no existential anguish rending the air. Standing quietly—no, peacefully—at the casket with this little family now temporarily lessened by Patti's leaving were her Beehive class, her Sunday School teacher, and a favorite teenage home teacher. There also were the two with whom her father had served in the bishopric. Her mother's Relief Society associates dried their tears and slipped away to prepare a family luncheon. Fellow members in the body of Christ remembered, "And whether one member suffer, all the members suffer with it" (1 Corinthians 12:26). . . .

That hopeful, trusting facing of the future is part of what it means to be a Latter-day Saint. It is part of knowing by divine revelation the answers (even in our childhood) to life's greatest questions. One writer speaking for almost all others declared that "the whole interest of [philosophy] . . . is centered in the three following questions: 1. What can I know? 2. What ought I to do? 3. What may I hope?" (Immanuel Kant, Critique of Pure Reason). Think of those fundamental and ancient issues, think of Pascalean terror, and then stand again at that little child's grave.

We have no way to measure such a conviction, but I am confident that tiny girl knew more of the eternal meaning of her experience than most of the adult population on this planet would have known in similar circumstances. And why not? Why shouldn't it intensify our sense of identity and self-respect and hope for the future to know that we are the spiritual offspring of God, that he is literally our Father in heaven, and that we are by lineal descent his sons and daughters, created in his own image? What encouragement should it give us to know that we lived with him before memory was revoked and that we will be with him again when all things, including memory, are fully restored? That one abiding and ineluctable truth does more to answer the philosophical questions of six millennia than any other single assertion under heaven. Indeed, man is only slightly under heaven, "a little lower than the angels" (Psalm 8:5), and never out of divine reach. . . .

What we "really are" is embryonic gods, and surely this world is trying to make us forget that, make us pursue something else. . . .

We must remember, in a world where some still go hungry, that men, women, and children can starve from a lack of self-knowledge as much as they can from a lack of bread. That is why, when Jesus invited his disciples to partake of the emblems of his body and blood, they were filled (3 Nephi 18:4-5)—filled with the spirit of heaven, filled with the spirit of hope, filled with more certain knowledge of who they really were: "heirs of God, and joint heirs with Christ." That same spirit bears witness to us yet that we are the children of God (Romans 8:16-17). . . .

There are a thousand reasons for and ten thousand joys in belonging to the true church. Surely no one can fully say—perhaps not even begin to say—what that covenantal relationship means to him or her. Suffice it to say that those who believe with me that The Church of Jesus Christ of Latter-day Saints is indeed the restoration of pure Christianity in the fullness of time will understand the meaning of membership expressed by an early seeker of the truth who fell during the Roman persecutions of the third century. Before he died, Cyprian wrote to his friend Donatus: "This seems a cheerful world, Donatus, when I view it from this fair garden under the shadow of these vines. But if I climbed some great mountain and looked over the wide lands, you know very well what I would see—brigands on the high roads, pirates on the seas, in the amphitheaters men murdered to please applauding crowds; under all roofs misery and selfishness. It is really a bad world, yet in the midst of it I have found a quiet and holy people. They have discovered a joy which is a thousand times better than any pleasure of this sinful life. They are despised and persecuted, but they care not. They have overcome the world. These people, Donatus, are the Christians and I am one of them" (Quoted by Marion D. Hanks, "Freedom and Responsibility," BYU Speeches of the Year, May 28, 1964, p. 11).

Following a long night of darkness, "these people" are the Latter-day Saints—and I am one of them. The meaning of my life is inextricably linked with my membership in that body. There my family and friends have found life, and found it "more abundantly."

"Often in our most difficult times the only thing we can do is endure. We may have no idea what the final cost in suffering or sacrifice may be, but we can vow never to give up. In doing so we will learn that there is no worthy task so great nor burden so heavy that will not yield to our perseverance. We can make it. . . however long and hard the road." So writes Elder Jeffrey R. Holland in this beautiful book that teaches how to overcome temptations and feelings of inadequacy and obtain forgiveness and strength.