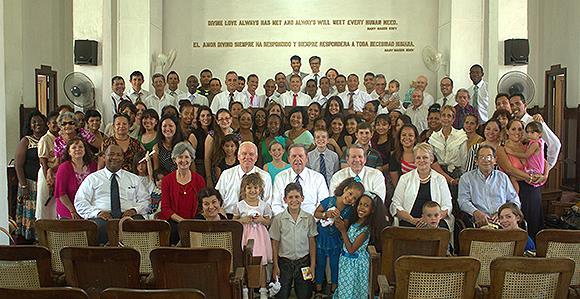 Elder Jeffrey R. Holland of the Quorum of the Twelve Apostles created the Church's second branch in Cuba on Sunday, June 15, during a branch conference attended by almost 100 people.

Accompanying him were Elder Donald L. Hallstrom of the Presidency of the Seventy, Sister Diane Hallstrom, Elder Wilford W. Andersen of the Seventy and president of the Caribbean Area, and Sister Kathleen Andersen. During the conference, the Havana Cuba Branch was divided to create the El Cotorro Cuba Branch.

Though the Church is not yet registered in Cuba, government officials in the Department of Religious Affairs have welcomed the Church since 2004, when the first Cuban Branch was organized, and have assisted the Church in its efforts to locate suitable places to worship.

During the last decade, the Free Evangelical Church, the Christian Science Church, and currently the Beth-Shalom Jewish Congregation of Havana have, in turn, opened their doors as places for the small but growing congregation of Latter-day Saints.