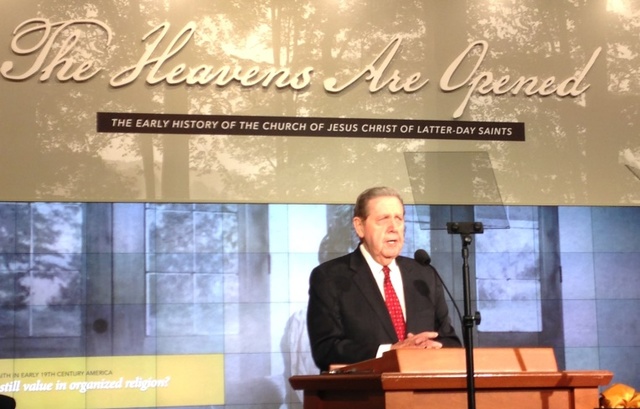 Yesterday, the Church History Museum was officially reopened, with a ribbon-cutting ceremony attended by Elder Holland and Elder Cook among other Church leaders, including Elder Snow of the First Quorum of the Seventy. Elder Holland shared a few thoughts with those in attendance at the event before cutting the ribbon.

After being closed for a year, Elder Holland reported, the newly renovated building now features a beautiful new exhibit entitled "The Heavens are Opened," telling the story of the Restoration and early Church history.

During his remarks at the ceremony, Elder Holland talked about one of the most exciting new features of the museum: a special 220-degree theater built expressly to show a new account of Joseph Smith's First Vision of the Father and the Son.

"The text for this short film," Elder Holland shared, "is gleaned from several of the prophet's first-hand accounts of the vision, adding substantially to the account we have known over the years." And according to Elder Holland, that is just one example of some of the incredible, innovative new displays now available in the Church History Museum.

The museum will be open over general conference on Saturday, October 3, from 10 a.m. to 7 p.m. and then will resume its regular hours. For more details, visit history.lds.org.