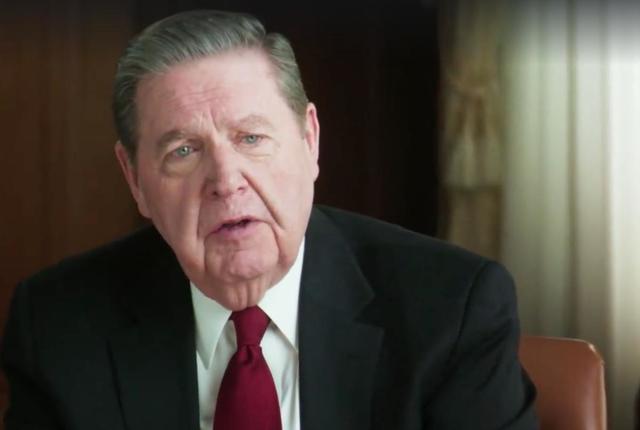 The following is excerpted from Shepherds, Why This Jubilee?

On the evening of December 23, 1976, my father underwent surgery to relieve the effect of osteoarthritis in the vertebrae of his back. The surgery was successful, but near the conclusion of it he suffered a major heart attack. Eight hours later he suffered another one. From those two attacks he sustained massive damage to a heart that was already defective from an illness suffered in his youth. By the time we finally got to see him, wired and tubed and gray and unconscious, it was mid-morning on December 24, Christmas Eve. “Magnificent timing,” I muttered to no one in particular.

Pat and I stayed at his side all day, as much for my mother’s sake as for my father’s. He was not going to live, and at age 60 she had never had to confront that possibility in their entire married life. As evening came along, we took her to our home. . . . I gave my mother a blessing and convinced her to try to get some sleep. I stayed with Pat for a while, putting out a Christmas gift or two; then I told her to hold the family together—as she has done all of our married life—and I was going back to the hospital. . . .

At the hospital I sat and walked and read and walked and looked in on Dad and walked. He would not, in fact, recover from all this. I suppose everyone knew that, but the nursing staff were kind to me and gave me free access to him and to the entire hospital. A couple of the nurses wore Santa Claus hats, and all the nursing stations were decorated for the season. During the course of the evening I think I checked them all out, and sure enough, on every floor and in every wing it was Christmas.

You will forgive me if I admit that somewhere in the early hours of the morning I was feeling pretty sorry for myself. “Why does it have to be like this?” I thought. “Why does it have to be on Christmas?” Of all the times to lose your dad, did it have to be the time when dads are the greatest guys in the world and gifts for little boys somehow appear that, in later years, would be recognized to be well beyond the meager Holland budget? Lying under that oxygen tent was the most generous man I have ever known, a Kris Kringle to end all Kris Kringles, and by some seemingly cruel turn of cardiac fate it was Christmas morning and he was in the process of dying. In my self-pity it did not seem right to me, and I confess I was muttering something of that aloud as I walked what surely must have been every square inch of the public (and a fair portion of the private) space in that hospital.

Then and there—2:00 or 3:00 a.m. in a very quiet hospital, immersed as I was in some sorrow and too much selfishness—heaven sent me a small, personal, prepackaged revelation, a tiny Christmas declaration that was as powerful as any I have ever received. In the midst of mumbling about the very poor calendaring in all of this, I heard the clear, unbroken cry of a baby. It truly startled me. I had long since ceased paying attention to where I was wandering that night, and only then did I realize I was near the maternity ward; somewhere, I suppose, near the nursery. To this day I do not know just where that baby was or how I heard it. I like to think it was a brand-new baby taking that first breath and announcing that he or she had arrived in the world, the fact of which everyone was supposed to take note. . . .

“Jeff, my boy,” my Father in Heaven seemed to say with that baby’s cry, “I expected a little more from you. If you can’t remember why all of this matters, then your approach to Christmas is no more virtuous than the overcommercialization everyone laments these days. You need to shape up just a little, to put your theology where your Christmas carols are. You can’t separate Bethlehem from Gethsemane or the hasty flight into Egypt from the slow journey to the summit of Calvary. It’s of one piece. It is a single plan. It considers ‘the fall and rising again of many in Israel,’ but always in that order. Christmas is joyful not because it is a season or decade or lifetime without pain and privation, but precisely because life does hold those moments for us. And that baby, my son, my own beloved and Only Begotten Son in the flesh, born ‘away in a manger, [with] no crib for his bed,’ makes all the difference in the world, all the difference in time and eternity, all the difference everywhere, worlds without number, a lot farther than your eye can see.”

I can’t fully describe to you what happened to me that early yuletide morning, but it was one of the most revelatory Christmas experiences I have ever had. And it dawned on me that that could have been my young parents who were so happy that morning. I was a December baby, and my mother never wearied of telling me that that was her happiest Christmas ever.

Perhaps the joy they felt that day at my birth was to be inextricably, inseparably, eternally linked with my sorrow at their passing—that we could never expect to have the one without the other. It came to me in a profound way that in this life no one can have real love without eventually dealing with real loss, and we certainly can’t rejoice over one’s birth and the joy of living unless we are prepared to understand and accommodate and accept with some grace the inevitability—including the untimeliness—of difficulty and trouble and death. These are God’s gifts to us—birth and life and death and salvation, the whole divine experience in all its richness and complexity.

So there lay my dad, the great gift-giver, he who found bicycles and BB guns and presents of every kind somewhere. Now he was starting to make his way out of the world on Christmas Day, on the wings of the greatest gift ever given. I thought of another Father.

"For God so loved the world, that he gave his only begotten Son, that whosoever believeth in him should not perish, but have everlasting life" (John 3:16).

True fathers and mothers were all alike, I realized; coming up with the best gifts imaginable at what is often terrible personal cost—and I am obviously not speaking of material gifts or monetary costs.

So I was mildly but firmly rebuked that night—by the cry of a newborn baby. I got a little refresher course in the plan of salvation and a powerful reminder of why this is “the season to be jolly,” and why any Christmas is a time of comfort, whatever our circumstances may be. In the same breath I was also reminded that life will not always be as cozy as “chestnuts roasting on an open fire” or an unending splendor while we stroll, “walking in a winter wonderland.” No, life will have its valleys and peaks, its moments for the fall and rising in the lives of all of God’s children. So now it is old Simeon’s joyful embrace of that little baby just before his own death that is one of the images I try to remember at Christmas.

I have repented since that night. In fact, I did some repenting there in the maternity ward. If you have to lose your dad, what more comforting time than the Christmas season? . . . These are sad experiences, terribly wrenching experiences, with difficult moments for years and years to come. But because of the birth in Bethlehem and what it led to they are not tragic experiences. They have a happy ending. There is a rising after the falling. There is life always. New births and rebirths and resurrection to eternal life. It is the joy of the stable—the maternity ward—forever.

“If thou hadst been here, my brother had not died,” (John 11:21) Martha said to him once, probably in the same tone of voice I had been using up and down the hallways of the hospital. “If that arthritis just had not required surgery, there wouldn’t have been any strain on his heart. If that conveyer belt had just been shifted a little, it wouldn’t have started that fire. If there just hadn’t been a small patch of ice on that particular stretch of road so close to the Colorado River. . . .” And on and on and on. Jesus has one answer for us all—one answer to all the “whys” and “what ifs,” all the “would haves” and “could haves” and “should haves” of our journey.

Looking sweet Martha firmly in the eyes, he said for all . . . to hear:

Of this witness I am a witness. In the name of Jesus Christ, amen. 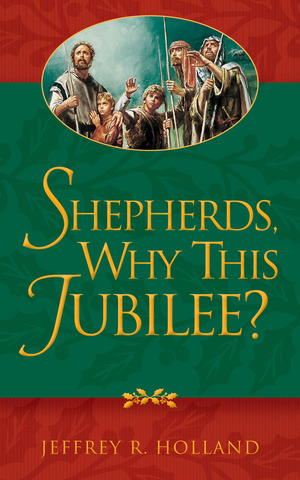 Read more inspiring Christmas insights from Elder Holland in Shepherds, Why This Jubilee?

In Shepherds, Why This Jubilee? Elder Jeffrey R. Holland celebrates the Christmas season and spirit by focusing on the birth and life of Jesus Christ — the true meaning of Christmas. In three essays, Elder Holland traces the path of Mary and Joseph to Bethlehem and sheds new light on familiar scriptures. He reflects on the sweet refrains of the carols and hymns that so eloquently recall the glorious first Christmas night, and he shares his own personal stories and memories of Christmas to testify of his deep feelings about Jesus Christ. When details overwhelm the holiday spirit, Elder Holland reminds us to remember why the shepherds were so joyful — because “in the city of David a Saviour, which is Christ the Lord” was born beneath a shining star. He reminds us that Jesus Christ is the answer to all our questions and the source of all our jubilee.