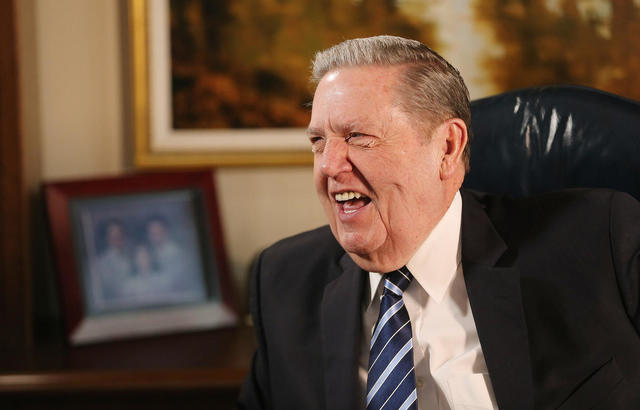 But how, you ask, do you get this glimpse of the future that helps you to hang on? Well, for me that is one of the great gifts of the restored gospel of Jesus Christ. Is it not significant that early in his life Joseph Smith was taught this lesson three times in the same night and once again the next morning? Moroni, quoting the Lord verbatim as recorded by the prophet Joel, said: “I will pour out my spirit upon all flesh; and your sons and your daughters shall prophesy, your old men shall dream dreams, your young men shall see visions:

“And also upon the servants and upon the handmaids in those days will I pour out my spirit” (Joel 2:28–29).

Dreaming dreams and seeing visions. The Lord’s spirit upon all flesh—sons and daughters, old and young, servants and handmaidens. I may be wrong, but I can’t imagine an Old Testament verse of any kind that could have helped this boy prophet more. He was being called into the battle of his life, for life itself, or at least for its real meaning and purpose. He would be driven and hunted and hounded. His enemies would rail and ridicule. He would see his children die and his land lost and his marriage tremble. He would languish in prison through a Missouri winter, and he would cry out toward the vault of heaven, “O God, where art thou? . . . How long . . . O Lord, how long” (D&C 121:1–3). Finally he would walk the streets of his own city uncertain who, except for a precious few, were really friend or actually foe. And all that toil and trouble, pain and perspiration would end so maliciously at Carthage—when there simply were finally more foes than friends. Felled by balls fired from the door of the jail inside and one coming through the window from outside, he fell dead into the hands of his murderers at 38 years of age.

If all of this and so much more was to face the Prophet in such a troubled lifetime, and if he finally knew what fate awaited him in Carthage, as he surely did, why didn’t he just quit somewhere along the way? Who needs it? Who needs the abuse and the persecution and the despair and death? It doesn’t sound fun to me, so why not just zip shut the cover of your scriptures, hand in your Articles of Faith cards, and go home?

Why not? For the simple reason that he had dreamed dreams and seen visions. Through the blood and the toil and the tears and the sweat, he had seen the redemption of Israel. It was out there somewhere—dimly, distantly—but it was there. So he kept his shoulder to the wheel until God said his work was finished.

And what of the other Saints? What were they to do with a martyred prophet, a persecuted past, and a hopeless future? With Joseph and Hyrum gone, shouldn’t they have just quietly slipped away also—somewhere, anywhere? What was the use? They had run and run and run. They had wept and buried their dead. They had started over so many times that their hands were bloodied and their hearts were bruised. In the name of sanity and safety and peace, why didn’t they just quit?

Well, it was those recurring dreams and compelling visions. It was spiritual strength. It was the fulfillment they knew to be ahead, no matter how faint or far away.

In their very first general conference, convened three months after the Church was organized, the Saints had recorded this:

“Much exhortation and instruction was given, and the Holy Ghost was poured out upon us in a miraculous manner—many of our number prophesied, whilst others had the heavens opened to their view. … The goodness and the condescension of a merciful God … create[d] within us sensations of rapturous gratitude and inspire[d] us with fresh zeal and energy, in the cause of truth” (Times and Seasons, 4:23).

There they were, approximately 30 members of the Church meeting in that tiny Peter Whitmer home in Fayette, planning to overthrow the Prince of Darkness and establish the kingdom of God in all the world. All the world? What presumption! Were they demented? Had they lost all power to reason? Thirty very average, garden variety Latter-day Saints willing to work with the rest of their lives? To what end? Persecution and pain and maybe 30 more members—for a grand total of 60? Perhaps they did see how limited their immediate personal success would be and maybe they even saw the trouble ahead, but they saw something more. It was all in that business of the influence of the Holy Ghost and heavens being opened to their view. President John Taylor said later of that experience:

“A few men assembled in a log cabin; they saw visions of heaven, and gazed upon the eternal world; they looked through the rent vista of futurity, and beheld the glories of eternity; … they were laying the foundation for the salvation of the world” (History of the Church, 6:295).

Now there was a lot of bad road between that first conference of 30 people and a church which would one day have nations flocking to it. And, unless I miss my guess, there are several miles of bad road ahead of that church yet. But to have seen it and felt it and believed it kept them from growing “weary in well-doing,” helped them believe even in the most difficult of times that “out of small things proceedeth that which is great.” In a battle far more important than World War II would be, these Saints also vowed victory, however long and hard the road.

For more uplifting insights from Elder Holland, check out However Long & Hard the Road available at deseretbook.com.