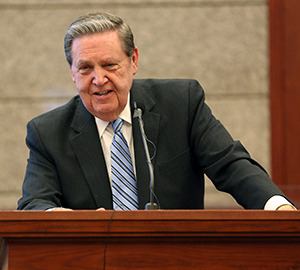 Hugh Hewitt runs a nationally syndicated radio show heard in more than 120 US cities every weekday afternoon with more than 2 million listeners. Last week, he got the chance to chat with Elder Jeffrey R. Holland of the Quorum of the Twelve. Here are some of our favorite moments from the interview.

1. Elder Holland keeps up with pop culture--and even has an opinion on #thedress.

Given that the interview took place in the middle of the cultural phenomenon now know as #thedress, one of the first questions broke the ice and asked Elder Holland his opinion on the matter.

"I just happened to turn on the news this morning," he said, "and it looked to me like it was blue and black. But I don’t know." And no, he didn't check with Sister Holland--"I don’t dare do that," he joked.

2. Elder Holland's son is the first LDS scholar to be a professor at Harvard Divinity School--a "sure sign of the apocalypse."

"I didn’t think that any Mormon scholar would want to go to the Harvard Divinity School," Hewitt claims. Elder Holland was quick to explain, "He’s not in the clerical business. He teaches history. So he teaches specifically American religious history. He could teach that almost anywhere, and that’s a pretty good audience, and they are treating him wonderfully well." Elder Holland's son is also a stake president, Elder Holland shares, which means he's a very active member of the church. Also, "it’s probably a sure sign of the apocalypse."

In his Yale dissertation, Elder Holland explored Twain "from his early years up to the publication of Huck Finn, where I think there was a wonderful, unique religious sense, hardly really viable in the sense that you and I would talk about religious faith, but he was preoccupied with it.

He goes on to share more of his knowledge of Mark Twain, explaining, "His cats were named Famine, Pestilence, Satan and Sin. He just thought about, he worked in religious metaphors. When he moved to a new city, his first friends were always ministers. Wherever he went, he would seek out a ministerial associate."

But does Elder Holland still read Twain? "No, not much. I’m too busy, I guess, unfortunately. I kind of left that behind with this ecclesiastical call."

In line with the Church's recent statement on religious rights, Elder Holland has recently been focusing on religious tolerance on a global scale.

Reflecting on a recent visit to Chapman University, he explains, "I think there is more interfaith, if you broadly define a phrase like interfaith. I think it’s not growing fast enough. And who knows the ultimate growth, but I do believe there’s more interest, there is more shared participation, very bright people, very articulate people, I think, are talking more and more about this and saying it does matter, and it needs to matter to more of us."

It's a topic the interview returns to again and again, with Holland mentioning, "There has to be some agreement on religious conviction and religious morality that doesn’t make religion and ugly word."

"We’re greatly blessed," Elder Holland said in reference to the current 85,000 missionaries serving. "They continue to come They continue to serve. And those numbers will increase. We’re projecting out probably within four years, the baseline number for the missionary force will be something around 100,000."

He also explained how much he and his fellows care for each of these missionaries. "We say a lot of prayers on behalf of those young people, because they’re your sons and daughters and my sons and daughters, collectively speaking, and they’re someone’s child. And we worry about them a lot."

"I’m a hopeless romantic," Elder Holland shared in the course of the interview. He also explained, "I’m an optimistic guy by nature."