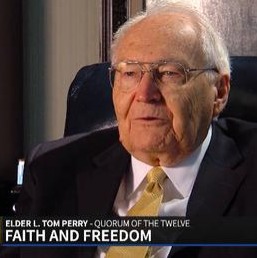 Elder L. Tom Perry, a member of the Quorum of the Twelve Apostles of The Church of Jesus Christ of Latter-day Saints, shares personal experiences during World War II, a family fights for a cure for Lou Gehrig’s disease and an old teaching idea gets new traction around the country. Segment 1

For those who imagine this week's Hobby Lobby decision closed the curtain on high-profile religious liberty cases involving the Affordable Care Act, guess again. Critics of the ruling claim that the majority opinions by Justices Samuel A. Alito Jr. and Anthony Kennedy could pose problems for the more than 50 nonprofits suing the government claiming the Affordable Care Act's contraception mandate also violates their rights under the Religious Freedom Restoration Act. Mark Kellner explains where the debate over religious exemptions heads next.

It's easy to take for granted all the freedoms we have in this country. Sam Penrod visits with World War II veteran and LDS apostle Elder L. Tom Perry about why he believes freedom is not a spectator sport and why we all need to take an active role in protecting it.