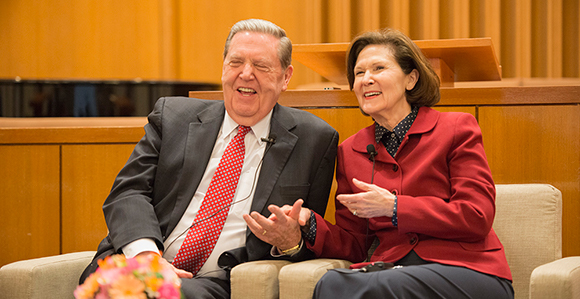 Sister Holland shared her personal testimony of the Book of Mormon at the 2018 Mission Leadership Seminar. “Recently during a near-fatal illness I wanted Jeff and his priesthood to be with me constantly,” she said. “Because he couldn’t always be at my side, I wanted the next best thing. I wanted my Book of Mormon in my hands, holding it, and when I slept I wanted it under my pillow. With doctors telling us that I wasn’t going to make it. . . , I knew if I did live, it would be because of the blessings of the true gospel that the Book of Mormon teaches.” During the same seminar, Elder Holland also shared the greatest revelation God has ever given as well as the most important figure in the Book of Mormon.

Missionaries should cherish and use the Book of Mormon above all other proselyting tools God has given them, said Elder Jeffrey R. Holland and Sister Patricia Holland on June 25.

“I fear however much we revere this record as the keystone of the restoration, we haven’t revered it enough,” said Elder Holland of the Quorum of the Twelve Apostles.

During the 2018 Mission Leadership Seminar, Elder and Sister Holland addressed the topic, “Christ and the Book of Mormon,” focusing their remarks on Doctrine and Covenants 5.

In this section, dated March 1829, the Lord tells Joseph Smith he has the gift to translate the Book of Mormon and that he “will grant unto [Joseph] no other gift until it is finished,” explained Sister Holland.

“Now think about this,” added Elder Holland. “The restoration is just beginning. Consider all the Lord needed to have Joseph do before that fateful day in which he would lie martyred in Carthage at just 38 ½ years of age." And yet, he added, the Lord instructed Joseph: “Don’t do anything until you translate the Book of Mormon and publish it to the world.”