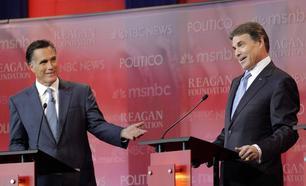 The nation got its first look at Texas Gov. Rick Perry last night during the Republican national debate and not everyone was impressed with the GOP frontrunner. In fact, the political punditry thought former Massachusetts Gov. Mitt Romney came out of the debate on top.

How much that might help Romney remains to be seen.

"Perry was hardly the reincarnation of Ronald Reagan," wrote The Washington Post's Michael Gerson "(He) often seemed awkward, nervous and programmed. On several questions, he left an impression of policy shallowness. He showed hints of brittleness, snapping that Karl Rove is 'over the top.'"

Romney on the other hand was "the most presidential," and the "natural and authentic candidate," wrote Gerson. "(Romney) seemed more electable than anyone else on the stage. In the first Perry-Romney faceoff, Romney won."