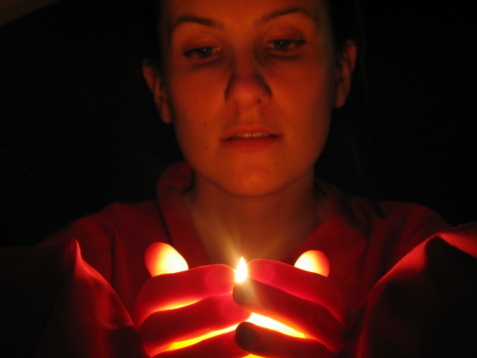 Thought: I recall a time . . . when the standards of most people were very similar to our standards. No longer is this true. . . . May we ever be courageous and prepared to stand for what we believe.(President Thomas S. Monson, “Dare to Stand Alone.” Ensign, Nov. 2011, 60.)

Scripture: Therefore, hold up your light that it may shine unto the world. Behold I am the light which ye shall hold up—that which ye have seen me do. Behold ye see that I have prayed unto the Father, and ye all have witnessed (3 Nephi 18:24).

Show your family a picture of Daniel and his friends rejecting the king’s food and wine, such as Gospel Art Picture Kit, 114. Ask:

- What appears to be happening in this picture?

- Have you ever been in a similar situation, where you were offered something that was against your standards?

- What made it easy or difficult to resist the offer?

- What blessings have you received for keeping your standards?

Tell your family that the person in this picture is the prophet Daniel andthat he was in a situation which made it particularly difficult for him to keep his standards. Take turns reading Daniel 1:1–20 and use the questions below as you read to help your family understand the story.

- What did the king of Babylon do to Jerusalem? (Verses 1–2, conquered it and carried away the treasures of the temple.)

- What happened to Daniel? (Verses 3–6, he and others were carried away captive and trained in the king’s palace.)

- Why would it be difficult for Daniel and his friends to refuse to eat and drink what was offered? (Verses 1–7, they were captives in a foreign land.)

- Which verse shows Daniel’s courage to keep his standards high? (You might want to explain that the king’s food and drink was first offered to the Babylonian idols. The law of Moses forbids Israelites to eat food that had been offered to idols.)

- How was Daniel blessed for his desire to keep the commandments? (Verse 9.)

- How did Daniel and his friends appear after ten days? (Verse 15.)

- What other blessings did Daniel and his friends receive from the Lord? (Verses 16–20.)

After discussing the story, ask your family to think about why Daniel and his friends were so much wiser than the others. Write the following statements where everyone can see them and ask them which statement seems most correct:

- They were healthier and wiser because they ate grains and seeds.

- They were healthier and wiser because the Lord blessed them for their obedience.

Help your family understand that there is truth in both statements. The Lord blesses us when we are obedient, and there are reasons for the things He commands us even when we do not always know the reasons.

Role-play some situations (age- appropriate for your family) to allow your family to practice refusing the temptation to do things they know are wrong (Dennis H. Leavitt and Richard O. Christensen, Scripture Study for Latter-day Saint Families: The Old Testament, [Salt Lake City: Deseret Book, 2009], p. 222).

The chore I most hated as a boy was fixing fences. It was a hot, miserable job, and it was extremely boring. Hour after hour we would walk the miles of barbed-wire fence lines. We would stop where the cattle had stretched the wires or broken the posts and repair the damage. I knew how most of the holes and broken posts had been made.

Not satisfied with this, they would eventually push against the wore, stretching their long tongues out as far as they could, and lick the grass into their mouths. In time the fence would break down, the posts would weaken, and huge holes would appear up and down the line.

The Lord has built some fairly sturdy fences to protect His children. There is plenty of good, green grass in the middle of His meadow, but far too often we look longingly through His fence to the entertainments, pleasures, ambitions, fashions, and desires of the world. Many Church members would never think of actually breaking out of the Lord’s protecting fence, but they see no harm in poking their heads through the wires t reach outside as far as possible. Occasionally some even want the Lord or His prophets to move the fence for their convenience.

I noticed while taking care of cattle as a boy that more often than not the cows did not go through the holes they created in the fence, but the calves did. Sometimes we would ride up the fence line and find a calf separated from its mother. Often it would be half starved and bawling to get back inside the fence next to the mother. The calves seemed to know how to escape through the holes the older cattle had made, but rarely did they know how to step back through those holes. If they were not found, sometimes they died.

 This is the true tragedy of [resisting] the standards and counsels of the Church. Parents must be careful in their own pushing of the limits not to create holes that their children will slip through. Compromising, for example, on the type of movies we watch may create a hole that our children will crawl through to their own destruction. One generation’s exception becomes the next generation’s rule, as standards of behavior deteriorate. If the cows had stayed in the center of the meadow, no calf would have ever been lost (S. Michael Wilcox, Don’t Leap with the Sheep, [Salt Lake City: Deseret Book, 2001], p. 131-133).

Grease a cookie sheet and set aside. In a large mixer bowl cream shortening, sugars, eggs, vanilla, and almond flavoring until fluffy. In another bowl sift flour, baking soda, and cream of tartar together. Add gradually to creamed mixture. Chill. Mold dough into 1-inch balls. Place onto prepared cookie sheet. Flatten each cookie with bottom of a drinking glass dipped in sugar. Bake for 10 minutes at 350° F. Cool on wire rack. Store in covered container. Makes 5 dozen cookies.