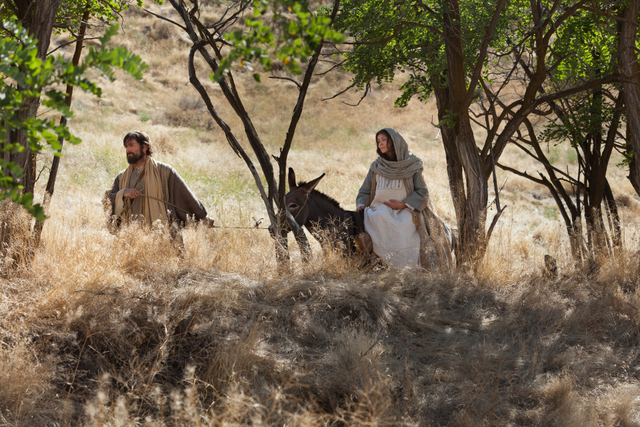 It all started with the fathers. As with countless Jewish girls, Mary’s betrothal likely began when, by custom, Joseph’s father approached hers. Before Joseph’s father said more than a few words, Mary’s father likely knew what he wanted. To be brief, he wanted to discuss a possible engagement of his son with Mary. That topic would require a somewhat formal meeting.1 Whether Joseph’s father was the first parent to approach Mary’s father we cannot know. It is certainly possible that her father had been approached by other fathers of young men in Nazareth. Mary would surely have been visible to all the fathers in the small town. She may have been one of the few eligible young women that year in a settlement that sat apart, high above the surrounding plains at the top of steep hills that rose near one another and, falling precipitously toward each other, formed a bowl-like setting for Nazareth’s few inhabitants.

For starters, the two families were distantly related—a good thing because each family would possess a rather clear idea of what the union of their children would mean for all of them. And laws of inheritance were at play to keep property among family members (Numbers 36:1–12). Although we don’t know the nature of their family ties, both Joseph and Mary were descendants of King David and thus of the tribe of Judah (Matthew 1:1, 6, 16; Luke 1:32; 3:23, 31; Acts 13:22–23; Romans 1:3; Revelation 22:16). This fact meant that, generations earlier, ancestors had moved north from the confines of Bethlehem. One possible era was the rule of Aristobulus (104 to 103 BC) who, after his army took control of the Galilee region, sent government functionaries north from Judea to bring a distinctly Jewish order to northern people and to begin to collect taxes. The ancestors of the two young people may well have been among those sent. As an added proof of the relationship of Joseph and Mary, they both went to Bethlehem for the tax enrollment because, plainly, that town was the ancestral home of each.

The contact by Joseph’s father, named Jacob in Matthew 1:16 and Heli in Luke 3:23, with Mary’s father, called Joachim in the second-century infancy gospel Protogospel of James, was to set up a meeting between the two men with witnesses attending. Even though we possess no record, he obviously consented. If Mary’s father had not agreed to a meeting, then nothing further would have happened. Out of sight stood the two mothers, one encouraging her husband to make the contact, the other discussing whether one or another father of eligible sons might try to set up a meeting. These women, though not present at the rendezvous between the fathers, where the terms of the betrothal were hammered out, were still very influential in how things would turn out for their children.

What about Joseph and Mary? Certainly, they knew each other at least by sight. Unlike the larger towns and cities, where young girls did not go out of doors and mix with people outside their families, those who resided in villages and small towns were freer to go about carrying out their parents’ wishes. Hence Mary was likely known throughout Nazareth both by other parents and their sons. By custom, if Mary was older than twelve and a half, she had a good deal of say about the young man whom her father would choose for her. If she were younger than that, she had to accept whomever her father selected. Not incidentally, she was eligible to become betrothed at twelve years and one day.

Even if Mary had not reached twelve and a half—of course, we have no idea how old she really was when she became engaged—she would have said a good deal to her parents about her wants. And so would Joseph. Naturally, both families would have to make adjustments if the betrothal became real. Mary’s family would begin life without this daughter in the home. That is why the groom paid a bride price—to make up for the loss of a daughter to her family, a daughter who had long assisted her mother with chores in the home and field. On his side, the groom would bring home a bride who would have to be integrated into his family’s routine, living together with his parents, likely in an upstairs extension of the parents’ home. All of this demanded that she adjust, and do so quickly.

Only men attended the meeting. The two fathers were present. Only in the case of death would a family representative serve as a substitute. The meeting also required witnesses to be present. Typically, these were close relatives of the two fathers. The agenda was simple—to come to an agreement: first, about the bride price to be paid by the groom and his family to the family of the bride and, second, about other prenuptial terms that either party felt to be important that were written into a marriage contract.

In effect, the meeting signaled the beginning of the transfer of the prospective bride from the custody and care of her father to that of the groom. As we can appreciate, this was a major step in the lives of these young people, both of whom were in their teens. If, as was customary, the engagement of Joseph and Mary lasted a year, they would begin to see one another with some frequency. After all, they were considered to be legally married though not living together. By law, their engagement would be called off, of course, in the event of the groom’s death or his decision to divorce his betrothed or the bride’s pregnancy from another man. It was this last condition that caused a soul-searching experience for Joseph, an experience that was resolved only by an angel (Matthew 1:19–20).

The betrothal of Joseph and Mary must have been for an extended time, most likely for the usual year. For Mary’s three-month absence in Elisabeth’s home, adding two or three weeks for travel from and back to Nazareth, fits snugly within the engagement period. Mary was betrothed before she departed and was still engaged when she returned. But all changed quickly when “she was found with child,” evidently a discovery made by her family members after almost four months of pregnancy (Matthew 1:18). Obviously, she could not hide what was happening in her body. When news reached Joseph’s family, they must have been devastated. And angry.

We can imagine some family members expressing their opinions frequently and loudly, demanding that Joseph do something quickly. Because of the binding status of the betrothal, it was his decision alone. A public divorce was open to him. But he came to reject that path. His feelings for Mary were deep enough that he did not want to humiliate her or open her to further, perhaps life-threatening measures. After deep thought, he “was minded to put her away privily” (Matthew 1:19). It is possible that, during this time of inner turmoil, Mary came to him to explain what had happened. If so, he may have rejected her other-worldly story. Clearly, he was under a great deal of pressure and did not know that Mary was under heaven’s guidance and protection.

But after Joseph came to know from “the angel of the Lord” that the infant whom Mary was carrying was “of the Holy Ghost” and would “save his people from their sins,” all changed (Matthew 1:20–21). Even so, the joyous days that typically preceded a couple’s marriage and the usual gatherings of the two families were swamped by dampness. Also likely lost to them was the noisy, happy escort by the bride’s female relatives that took her to her groom’s home on the day appointed for their marriage. Under the circumstances of her pregnancy, such an event would have been seen as unseemly, improper. But, as we know, that was not the end of the story. Celestial gifts and acknowledgment awaited them in Bethlehem. 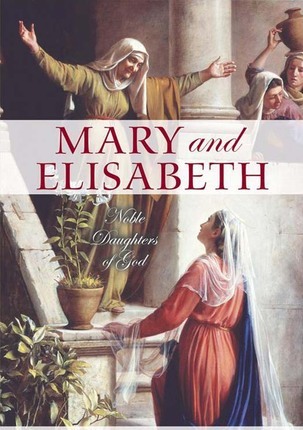 Based on extensive research and careful study by respected gospel scholar S. Kent Brown, the sacred lives and missions of Mary and Elisabeth come to vivid life through keen insight into scripture, through relevant cultural and historical information, and through stunning paintings by master artists. Mary and Elisabeth: Noble Daughters of God is an inspiring and fascinating look into the setting, lives, and roles of these two remarkable women. Order your copy today on either deseretbook.com or at any Deseret Book location.

Dr. S. Kent Brown is an emeritus professor of Ancient Scripture at Brigham Young University and is the former director of the BYU Jerusalem Center in Near Eastern Studies. He is the author of Mary and Elisabeth: Noble Daughters of God, as well as many other books and articles. In the world of documentary films, he was the executive producer of Journey of Faith, Journey of Faith: The New World and Messiah: Behold the Lamb of God.