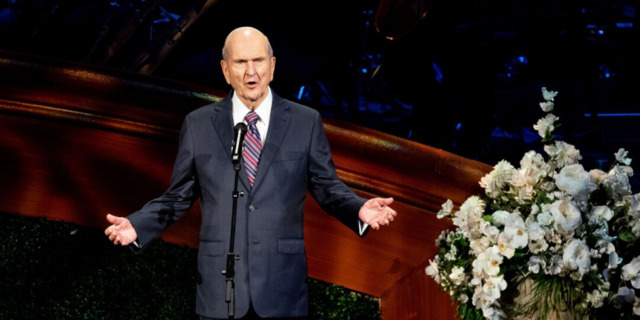 Found in the Footnotes: President Nelson Shares What Will Help Us When Surrounded by Uncertainty and Fear

Editor's note: Our bi-weekly Friday column, “Found in the Footnotes,” explores some of the footnotes from remarks given by General Authorities and General Officers of The Church of Jesus Christ of Latter-day Saints.

Another breaking news alert notification pops up. My state has extended its "Stay Home, Stay Safe" directive through April. It looks like there will be more weeks of social distancing and disrupted routines.

Then I stop, and I think about how I have more time than usual to dig into the new text (and footnotes) of the April 2020 general conference addresses, how I have Easter weekend to look forward to, and how I’m participating with people around the world in a worldwide fast.

► You may also like: Text for April Conference Now Available; Here's How to Get Your Own Wide-Margin Journal Edition

Yes, uncertainty is still prevalent, but as President Russell M. Nelson said in his Sunday morning remarks, “Our Father knows that when we are surrounded by uncertainty and fear, what will help us the very most is to hear His Son. Because when we seek to hear﻿—truly hear﻿—His Son, we will be guided to know what to do in any circumstance.”

I totaled the verses referenced the most by speakers in April general conference. With it being the bicentennial celebration of the First Vision and President Nelson’s charge to #HearHim, I was not surprised to find that verse to be Joseph Smith History—1:17:

"It no sooner appeared than I found myself delivered from the enemy which held me bound. When the light rested upon me I saw two Personages, whose brightness and glory defy all description, standing above me in the air. One of them spake unto me, calling me by name and said, pointing to the other—This is My Beloved Son. Hear Him!"

Turning back to President Nelson’s Sunday morning remarks, I reread how he explained three instances of the Father using the phrase “Hear Him” to introduce His Son: on the Mount of Transfiguration to Peter, James, and John, to the Nephites in ancient Bountiful, and to the boy Joseph Smith.

“Now, my dear brothers and sisters, consider the fact that in these three instances just mentioned, just before the Father introduced the Son, the people involved were in a state of fear and, to some degree, desperation,” President Nelson said.

Does that sound familiar to you? There have been moments where COVID-19 has brought "fear and, to some degree, desperation" to my life. But just as the Savior was there for the apostles on the Mount of Transfiguration, for the people who had been in darkness in Bountiful, and for the boy Joseph Smith, He will be there for us, too.

It was also no surprise to me that the second most-referenced verse of conference was Alma 7:12:

The Savior knows what we are going through. He knows about the infirmities we currently face with COVID-19.

Earlier this week, I decided to go to the temple. Now I know you may be thinking, “The temples are closed right now.” That may be true. But while I may not have been able to go inside the temple, I had a memorable experience outside, which I wrote about in my journal and shared on social media to capture my experience:

"My Wednesday nights are most often spent in the temple. So, I decided I was going to go, even if I couldn’t go inside. My heart sank as I pulled up and saw an empty parking lot and a temple with closed gates—until I rounded the corner. Cars dotted the parking lot, each vehicle facing the temple. Children on bikes cheerfully rode through the parking lot. Even two motorcyclists pulled in front of the temple. 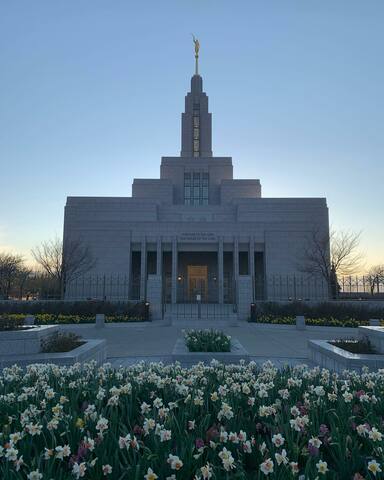 "I parked and walked around, glancing ever so quickly at some of the people who were in my parking lot session with me. There was a married couple enjoying what looked to be a regular date night conversation. There was a family listening to a general conference talk I could hear through the muffled speakers. There was a woman with no hair, likely going through chemo treatments, who I could sense was longing for comfort. The cars kept coming to our parking lot session with a new person driving through every so often. And though none of us spoke, I believe we all felt the peace that can only be found when we are close to these sacred spaces.

"I returned to my car and was quickly lost in meditative thoughts, when suddenly the nighttime lights turned on. A simple reminder to me, and all of us in the parking lot session, that this is the House of the Light of the World, and He is still there. The Savior is still here."

As President Nelson said, “The increasing darkness that accompanies tribulation makes the light of Jesus Christ shine ever brighter.” I felt that in the temple parking lot that night.

Earlier this year, President Russell M. Nelson issued an invitation to think deeply and often about a key question, “How do you hear Him?” throughout this bicentennial year. He also invited us “to take steps to hear Him better and more often.”

► You may also like: President Nelson Issues Second Invitation in Bicentennial Year, "Hear Him"

In his conference remarks, he suggested some ways we can hear Him: through the scriptures, through temple and family history work, through refining our ability to recognize the Holy Ghost, and through heeding the words of prophets, seers, and revelators.

President Nelson explained: “What will happen as you more intentionally hear, hearken, and heed what the Savior has said and what He is saying now through His prophets? I promise that you will be blessed with additional power to deal with temptation, struggles, and weakness. I promise miracles in your marriage, family relationships, and daily work. And I promise that your capacity to feel joy will increase even if turbulence increases in your life.”

So whether it's this Easter weekend or throughout the coming weeks of uncertainty, I look forward to finding ways to #HearHim.