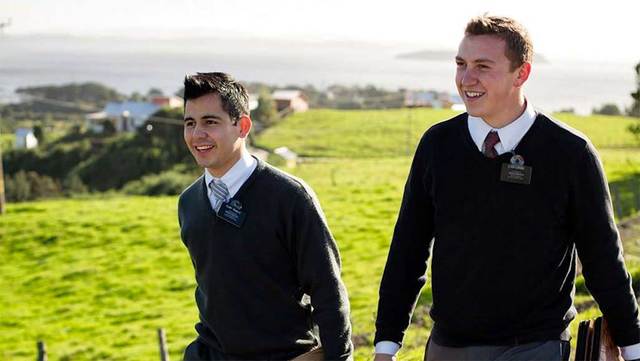 Gerald N. Lund: What 4 Mission Miracles Taught Me About Trials of Our Faith

While touring the Switzerland Geneva Mission in December 2003, my wife and I had an interesting experience. It is another example of how we learn by faith and how the witness comes after the trial of our faith.

The mission president at the time was President Stephen D. Nadauld, who had served as a member of the Second Quorum of the Seventy from 1991 to 1996. His wife, Margaret Dyreng Nadauld, had served as general president of the Young Women organization from 1997 to 2002. They were called to serve in the Geneva mission in July 2003. We knew the Nadaulds well because for a time they lived in our ward in Bountiful, and I served as their bishop. My wife had also given two of their boys piano lessons. So we were pleased when we were assigned to tour their mission with them.

The Switzerland Geneva Mission at that time included the French-speaking part of Switzerland, a sizeable chunk of eastern France, and the little country of Luxembourg. Lynn and I flew into Strasbourg, France, arriving around 8:00 p.m. We were met by President and Sister Nadauld. We then drove to Nancy, France, where our first zone conference would be held the next day.

As we were driving along, renewing old times, President Nadauld’s mobile phone rang. As he talked I could tell he was receiving some kind of a report from a missionary. After a few minutes, he thanked the elder, but before hanging up, he asked this question: “Any little miracles this week, Elder?” There was a long pause as he listened, then he commended the elder, thanked him again, and hung up. President Nadauld then told me that he had his zone leaders call in each week, half on one night, half on another, to give the president a verbal report on the week.

His question to the elder intrigued me, and I started to ask him what he meant by “little miracles,” but before I could do so, the phone rang again. It was another zone leader calling in his report. As they finished, the same question was asked: “Any little miracles?” Again there was silence as the president listened. Again he commended the elder and thanked him. That happened twice more in quick succession.

Finally, the last report was finished and it was quiet again in the car. So I said, “President, tell me about these ‘little miracles’ you keep asking them about.” He laughed and then explained. He told me that a few weeks before he had had the thought come to him that missionaries wasted a lot of time on cancelled or missed appointments. Usually it took a lot of time for the missionaries to travel to appointments, either walking or by taking public transportation, and even when they confirmed the appointment, sometimes they would arrive at the investigator’s home and find no one there. Discouraged, they would turn around and come back.

He then gave them this advice. “Elders and sisters, when an appointment falls through, it is natural to feel like you’ve had a failure and be disheartened about the waste of your time. But remember, the Lord knows where you are. There may be another reason for you being there. So any time an appointment falls through, I want you to immediately look around and find someone to talk to. You can do this either by finding someone on the street or by knocking on doors.”

He said that as the missionaries started to do as they had been counseled, they started reporting in what they called their “little miracles.” So now, President Nadauld made it a practice to ask for a report on such experiences as part of the zone leader’s weekly reports.

By now I was really curious and asked him to share some examples of what his missionaries had experienced. He shared four such stories, at least some of which had just been reported to him that night.

“Are You the Ones I’m Supposed to Talk To?”

Two missionaries went to an apartment building for an appointment. It was about ten in the morning when they knocked on the door, but no one answered. They stepped back in the main hall, and, remembering the president’s counsel, they started to talk about how they could find someone else to talk to. Just then the elevator doors opened, and a very large man got out. He was barefoot and wearing trousers and a tank-top type of T-shirt.

The moment he saw the missionaries, he started toward them. That immediately made them nervous for they had never seen the man before, and he was obviously coming at them. Then the man said, “So are you the ones I’m supposed to talk to?” They asked what he meant. He explained that he worked midnight shifts. He had come home that morning as usual and went to bed. But suddenly he woke up out of a dead sleep and had a strong feeling that he needed to get dressed and go downstairs because there was someone there he needed to talk to.

“You Are Wearing Those Name Tags”

Two other missionaries came out of a large apartment building after their appointment had fallen through. They immediately started looking around for someone to talk to. They saw a man crossing the square some distance away. They started toward him, hoping to intersect him. However, as they approached him, the man slowed his step, peering at them closely.

“Ah,” he said. “I notice that you are wearing those name tags.”

Surprised, they said yes, then explained that they were Mormon missionaries and had a message to share about Jesus Christ.

The man seemed pleased. “I thought so,” he said. “I’ve seen you or others like you around town before, and I always had a feeling that you had something to do with religion. I’d like to hear your message because I’ve been searching for religion in my life for the last little while.”

Two sister missionaries got on a train. They chose a seat beside a man who was sitting alone. Like good missionaries should, they struck up a conversation with him. They told him who they were and what they were doing in France and then initiated a little gospel discussion.

The man was polite, but after a few minutes he said, “I’m sorry. I am not interested in religion.” Then he got up and moved to a different seat.

Disappointed, the sisters sat back. Just then one of them felt a tap on her shoulder. She turned around, and the man sitting directly behind them leaned forward. “I couldn’t help but overhear your conversation. That other fellow may not be interested in your message, but I am. Would you be willing to speak with me?”

A Stupor of Thought

In a large city, two elders came back out onto one of the main streets after their investigators turned out to be no-shows. They looked around, but there was no one close by whom they could talk to. So the senior companion decided that they would look in their daily planner to see if there was someone they knew who lived in the area whom they could visit.

He sat down on a low wall and began to look through his book. He described what happened next as an absolute stupor of thought. He read through one page, but when he got to the bottom he realized that he could remember nothing of what he had read. Puzzled, he started again. The same thing happened. And again. Completely baffled, he looked at his companion, who by now was getting a little impatient.

“What are we going to do, Elder?” his companion asked.

“I don’t know, Elder,” he replied. “It’s like my whole brain has shut down.” So he started once again to go through his book.

Just then a young man approached them on a bicycle. As they looked up, to their surprise he stopped beside them. “Do you have a message for me?” he asked.

Totally taken aback, the senior companion said, “Well, yes. Yes, we do. But how did you know that?”

The man explained that he had been riding his bicycle in the opposite direction on the other side of the busy street. Suddenly he heard a distinct voice in his head saying, “Turn around. Cross the street. There is someone over there who has a message for you.”