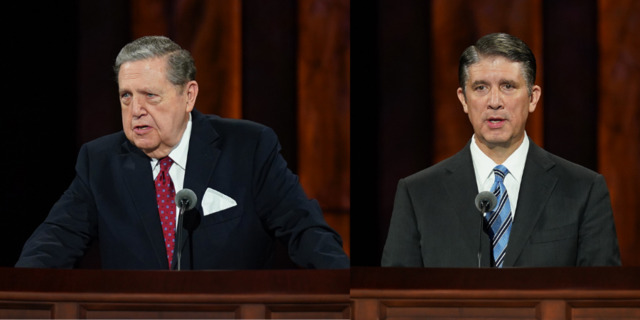 Have a father and son ever spoken in the same general conference?

Elder Jeffrey R. Holland, of the Quorum of the Twelve Apostles, and his son, Elder Matthew S. Holland of the Seventy, both shared remarks during the October 2020 general conference. But is this the first time two related individuals have spoken in the same conference?

In an article for Deseret News, Tad Walch offers an answer that may surprise you. He cites three examples in which a father and son have spoken in the same conference:

► You may also like: See a powerful quote from each October 2020 general conference talk

But it doesn’t stop at father-son relationships. As Walch points out, brothers have also spoken in the same general conference meeting as well.

“Elder L. Whitney Clayton, who was granted emeritus status on Saturday after 19 years as a General Authority Seventy, spoke in the same April 2017 conference as his younger brother Elder Weatherford T. Clayton, also a Seventy,” he states in the article. Additionally, Elder Joseph B. Wirthlin, of the Quorum of the Twelve Apostles, and his brother Elder Richard B. Wirthlin of the Seventy spoke together in October 1997.

► You may also like: 269 words: The shortest talk in the history of general conference?

The article also mentions an even rarer father-daughter combination of speakers. Walch shares this and more things he learned about the Church during general conference in his article, which you can read at Deseret News.