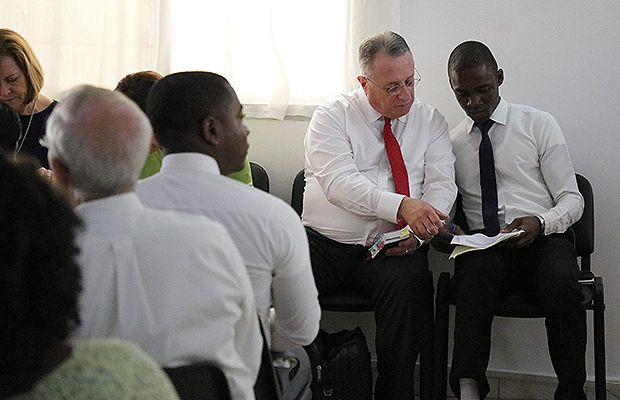 Just before the 40th anniversary of the priesthood revelation, Elder Neil L. Andersen and Elder Ulisses Soares visited Latter-day Saints in West Africa. “The Church is growing and becoming a great people of faith and righteousness because of the good people there,” Elder Andersen said. Learn more about how the Church in Africa has grown to 300,000 members in 40 years.

Elder Marcus B. Nash, a General Authority Seventy and member of the Africa West Area Presidency, said, “The mantle of an Apostle is uniquely powerful, and each of these brethren carries the mantle wonderfully well. Each blends the mantle with his own constellation of talent, gifts, attributes, and personality.”

Elder Nash accompanied Elder and Sister Soares during their visit to Senegal. “The Saints felt the love of Christ through this special witness of Christ and genuinely rejoiced,” he said. “Elder Soares spoke in French, which was a blessing to the people.”

► You'll also like: How We Misinterpret "Black" and "Curse" in the Scriptures: Insights from an African American Convert

A few days prior to the meetings with the members in Dakar, Senegal, a young single adult woman walked past the front of the rented chapel, stopped, and entered. She told the branch president “she felt that she needed to come into our building in order to learn about how to have more peace and happiness in her life,” Elder Nash said. “She attended the meetings, met Elder Soares, and literally beamed with joy. The tapestry woven through these days is one of joy, peace, love, and truth. Very edifying to all involved."