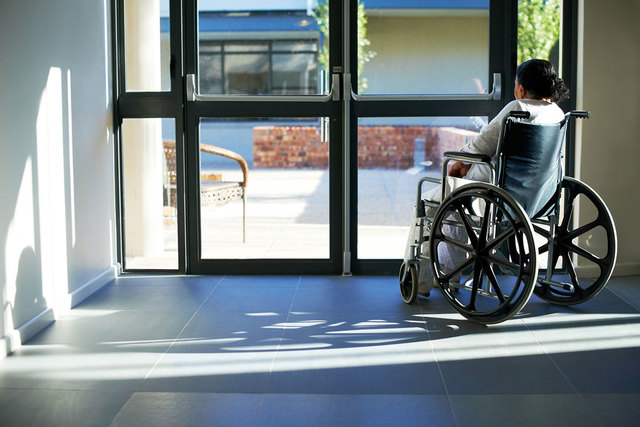 How Having My Car Stolen Helped Me Find Christmas

I cried the hardest my first Christmas in a wheelchair. I’m not saying that because this is a Christmas story or because I am trying to milk some emotions. It really was the hardest time for me that year. I had been paralyzed in a hiking accident that March and released from the hospital in June—released was the word they used, but I was, from that time on, wheelchair-bound. My legs wouldn’t move. My stomach and back muscles didn’t work. And my hands were lifeless and floppy.

The whole year was hard, don’t get me wrong, but Christmas brought a whole new level of challenges. I have a small family, but we are big on creativity, so for Christmas, we were all about the hand-crafted candy, handmade cards, hand-painted . . . stuff. It was all about the handmade, but the trouble was, my lifeless and floppy hands didn’t work.

I sat by myself with a tube of wrapping paper, some tape, and a store-bought gift in a small box. I refused help from everyone; I wanted to do it myself. And all by myself. I had lost so much independence being paralyzed that I fought for every morsel I could get. It must have been an hour of ripping (scissors were out of the question; how could I use those with no finger movement?) and taping. The result was a tape-covered, squished ball of Christmas paper. Independence isn’t always beautiful. 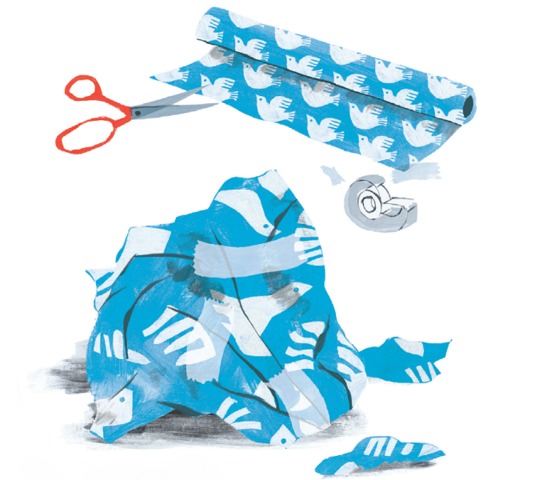 Everyone said I should be proud as they set it under the tree next to the other gifts tied with multi-looped ribbons, glittery craft sticks, and origami birds. That was seriously how my family wrapped their gifts.

After that initial Christmas disappointment, I worked hard the next year and, one by one, relearned how to tape and tie and use scissors (cue the “Hallelujah Chorus”). By the next Christmas, I was wrapping gifts almost as beautifully and just as independently as I’d done before my accident.

And I was regaining more independence in other areas of my life, too.

A special car became my passport to anything I ever wanted. Anywhere. I felt so liberated. Wheelchair-bound now meant only that I couldn’t stand, not that I couldn’t move. And I was on the go. I went back to college. I joined the wheelchair rugby team. I competed at Ms. Wheelchair America. I got married!

My husband, Whit, married me as I was, wheelchair and all, on February 29, 2008, four years after I was paralyzed. We were sealed in the Salt Lake Temple for time and all eternity—and they don’t make wheelchairs in eternity.

Planning Christmas gifts with my husband was a new experience. He likes to adopt the idea that you don’t want to miss somebody, so you probably shouldn’t take gifts to anybody. That way nobody feels left out. I like to take the stance that if you give a gift to every single person in the entire neighborhood and surrounding streets, you don’t miss anybody.

Needless to say, my husband thinks I overdo it. I think he might be right, but that still doesn’t stop me. I love being able to show a little love for my ward family and neighbors by giving them something I’ve made.

We were still essentially newlyweds the Christmas I decided to make small marshmallow treats for the neighbors. When I say marshmallow “treats,” I really just mean marshmallows. I’m not a very fancy baker like all the amazing Pinterest wives, but I am pretty artsy, and I like to draw, so I drew small Christmas pictures on each marshmallow with edible markers.

My pictures weren’t Rembrandts, but each one took me several minutes. To draw, I wove the edible marker between the fingers of one hand and held the marshmallow up with the other. The pictures were small, so I had to hold them close to my face so I could see what I was doing, but because my tummy and back muscles don’t work, I was merely balancing my upper body in place while I drew each picture. I didn’t want to move and ruin the drawings, so I had to hold my breath as I flexed all the rest of the working muscles in my shoulders, neck, and face so I could create these mini, edible masterpieces. 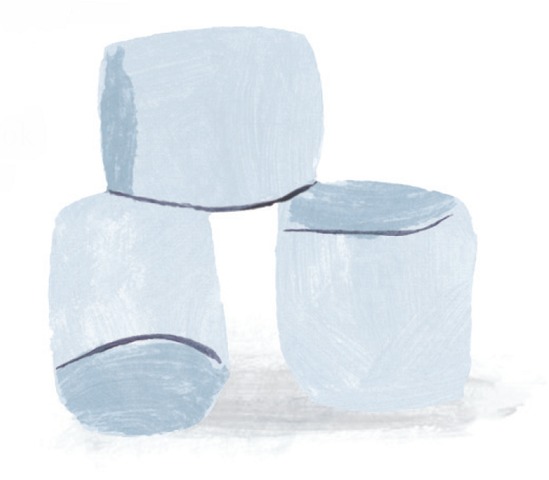 I had about five marshmallows in each bag and over 40 bags, so it was a lot of breath holding and breaks. But I got them all done and wrapped them up in Christmas bags with Christmas bows. I was so pleased with myself. I mean, there weren’t any glitter sticks or origami birds, but I’d done them myself, and they looked pretty dang decent.

It was a cold night a few days before Christmas when my husband was loading all of our marshmallow treat bags into my Subaru Baja for delivery. We had plenty of snow, and it seemed like the perfect night to deliver our hand-drawn Christmas treats to our neighbors. My husband had turned on the car and turned up the heat so it would be nice and warm for me when I got in, which was nice because I cannot control my temperature. It was actually the first ability to go when I broke my neck. I just stopped being able to sweat or warm up my body. I can’t control it at all; whatever the weather is around me is what my body tries to be. So my husband was trying to make it easy for me so I could go from my warm house to my warm car and not be chilled while we delivered our special gifts.

When everything was finally loaded (and hopefully not melting in the full-blast heat), my husband came back in for me. We did not want or need to bring my wheelchair along—he was going to pick me up and put me on his back, piggy-back style.

My husband opened the front door wide so we could walk out once he picked me up, but as he did so, he saw our nice, warm car—with all the Christmas bow-tied, hand-drawn marshmallow gifts—driving down our quiet neighborhood street. Without us. Time seemed to stand still. Then, in slow motion, my husband turned to me, his eyes as wide as the distance between us and our car, and said, “Our car’s been stolen.” Our car. My car. The only car I could drive. The only car that could fit my wheelchair. My passport to the outside world. My element of independence had been taken.

We were on the verge of tears, and we knew it, but before any could fall, I quickly said, “We can cry, or we can laugh, but there’s no going back.”

We had a hard time calling the police because they didn’t take our call very seriously. We just kept laughing. They kept asking if it was a joke. Yes, we supposed it was, but the joke was on the thieves who probably didn’t even need a wheelchair-accessible car. Or hand-drawn marshmallows.

Our newlywed salary didn’t give us a lot of options except to just start saving our pennies for another wheelchair-accessible car.

That Christmas we adopted my husband’s philosophy that if you don’t give any of your neighbors gifts, nobody feels left out.

Late into the night on Christmas Eve, Whit and I cuddled close on the couch. We were sure Santa Claus couldn’t fit a new car, or any other element of independence, into our stockings, but we enjoyed the flashing lights on the tree. My husband squeezed me tight and said he was glad I hadn’t been in the car. I squeezed him right back and said I was glad he hadn’t been in the car. We both agreed that they could take the car, the independence, the treats, the time, and the effort, but there was nothing in the car we would miss this Christmas.

It was okay that our car, my car, had been taken. As I laid my head on my husband’s chest and felt him breathe in and out as he fell asleep, I thought about how hard I’d fought to do things on my own. I thought about how triumphant I’d felt when I could finally drive by myself. I thought about how happy I’d been when I could finally tape things and use scissors. But wrapping a beautiful present, complete with glitter sticks and origami birds, didn’t seem like the goal anymore as I snuggled closer to my husband. After all, independence isn’t the plan. It never was. We weren’t sent to earth to see how much we can do all by ourselves but, rather, to see how well we can share the gifts we bring with us and how well we can unwrap the gifts we see in each other. And to see how much we can rely on God.

I must have dozed off with my husband, enveloped in the light of the Christmas tree, because we were both startled by a late-night phone call from “Officer Elf” informing us that the police had found our car.

The police returned the car to us that night, complete with brass knuckles, but not any hand-drawn marshmallow treats. We like to think the thieves ate them.

We laughed and hugged and hugged some more. And as we hugged, it suddenly occurred to me that no matter what abilities I had or didn’t have, no matter how fancy my bows were or whether I could add glitter sticks to my presents, I was sealed to my husband for time and all eternity— and that was a gift no one could steal.

And I don’t need scissors, glitter sticks, or tape to wrap him tightly in—just my arms to hold him close this Christmas . . . and the eternity of Christmases to come.

This issue also features stories about Michael McLean, the Church in Alaska, counsel from the Brethren, an interview with Corbin Allred, and slow cooker recipes from Six Sisters' Stuff.

Also, read more heartwarming Christmas memories from a number of LDS authors in The Perfect Gift, available at Deseret Book stores and deseretbook.com.