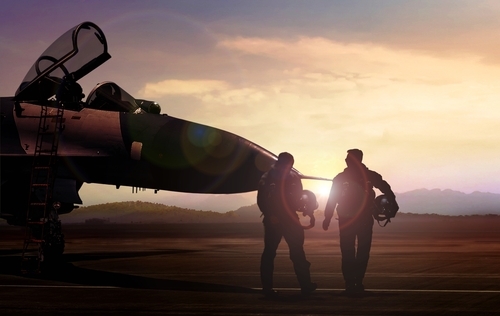 I was fresh out of U.S. Air Force pilot training, struggling to find my place as the new guy in my first fighter squadron. All the other squadron members seemed so sure of themselves, full of energy and confidence. I wanted to fit in. I wanted to be part of the gang, a member of the club. I wanted my career to flourish. The last thing I wanted to do was make waves or highlight myself as a troublemaker. But it seemed that I couldn't escape it if I wanted to live my beliefs.

The first test of my courage came during the ritual initiation into the squadron. Incoming squadron members had to drink a yard of ale. The yard is a very tall beer glass with a bulb at the bottom and widening shaft at the top containing approximately one fluid yard. With squadron members singing and cheering, you had to drink the yard without letting the glass leave your lips. I wanted to fit in, but I had committed to keep the word of wisdom. I was nervous about how they would respond if I refused. Would they accept me into their ranks? When my turn to drink arrived, I asked them to fill it with root beer. They laughed and teased me, but filled the yard with soda and accepted my initiation. After that, they viewed me differently. I was not like them.

With each mission, I tried to prove myself a capable pilot and dedicated squadron member. The members of my squadron began to accept me in spite of the differences in our standards. I worked hard to be a valuable member of the organization, but I wondered when our differences would clash again.

► You'll also like: LDS Pop Stars Share How They Stand for Faith and Family Against All Odds

Joshua, the great prophet-warrior of the Old Testament, called the children of Israel together before he died. Speaking on behalf of the Lord, he reminded them of their history and all that God had done for them. Then he put before them a choice: Choose the gods of Egypt (where they had come from), the gods of the Amorites (where they had taken up residence), or the God of Abraham, Isaac, and Jacob. He challenged them, “…choose you this day whom ye will serve… but as for me and my house, we will serve the Lord” (Joshua 24:15). It took courage for the children of Israel to choose, but we will likewise be faced with similar choices. It will always take courage to choose what is right.

Not long after my initiation, Spencer (name changed), a former football star at the Air Force Academy, called for a meeting of lieutenants. With his large shoulders and square chin he looked like something from an Air Force recruiting poster in his green flight suit and red squadron scarf. It was a different time at the height of the Cold War, before women were afforded the opportunities to fly combat aircraft. The squadron was a male-dominated workplace, and he was the leader of the lieutenants.

The meeting was called to order and I huddled in the small office with the other lieutenants discussing squadron business, but instead of looking at them, I stared at the floor because the walls were covered in pictures from pornographic magazines. Pornography was commonplace in the squadron building. For that reason, I had avoided this office up until this meeting, but felt compelled to participate on that day because Spencer had insisted. I was uncomfortable, but I was worried about seeming self-righteous or judgmental if I told them I couldn’t enter the office because of the pictures on the wall.

We discussed several items of business pertinent to the lieutenants. Then, at the end of the meeting, Spencer asked if anyone had anything else to bring up. I sheepishly raised my hand. “Is there any way we can take down these pictures? They go against my values and make me uncomfortable. Besides, our wives come into this room from time to time and I think it might make some of them uncomfortable as well. Could we please take them down?”

My request was followed by several seconds of silence. The other lieutenants looked around at the walls. I honestly wondered if Spencer was going to tackle me and throw me out of the squadron for proposing the change. Certain that my request meant I would be ostracized, I chewed at my bottom lip waiting for an answer.

“You know,” said Spencer. “He’s right. We should take them down.” With that proclamation, he stood up and began pulling the offensive pictures from the wall. Several others followed his lead and began doing the same. I breathed a sigh of relief as my squadron members honored my request. The next week we decorated the office with pictures of airplanes.

Like the Israelites, we have been asked to choose whom we will serve. We are invited to covenant with the Lord through ordinances. I didn’t know how my peers would respond to my request to take down the pictures, but I did know I had made a choice to be obedient long before I sat in that squadron office. I had chosen. The only choice that day was between keeping my covenants or breaking them. I’m happy I found the courage to choose the right in that moment of testing.

Sometimes, we are the Joshua in the room inviting others to choose the right. The world is full of good people who are waiting for someone to speak up. Often all it takes is for one person to suggest a better moral choice, and others will follow because their conscience is pricked. Have the courage to be that person, and you will be surprised how many will follow.

► You'll also like: The 4 Most Important Ways to Stand Up for Religious Freedom (as Taught by Captain Moroni)

I’m glad my peers tested my moral courage. They gave me the chance to express my values and request different behavior from them, without sounding self-righteous. Eventually, the squadron disbanded and our careers took us on different paths. Several of the pilots in the room that day now work at the same airline I do. I hold my head high when I see them. They respect me for keeping the commitments I made. I still honor them for accepting my challenge to do the right thing. We are all better for it.

Courage is not simply one of the virtues, but the form of every virtue at the testing point.

Professional pilot and youth speaker Brock Booher helps us recognize and learn to responsibly use the most enabling tool we possess—moral agency. Don’t live life on autopilot. When mishaps and tough choices inevitably come your way, Fly, Eject, or Die helps you to prepare now, so that in the moment, faith will overcome fear and you can soar through any obstacles this earth life may hurl at you. Buy the book at Deseret Book stores and deseretbook.com.