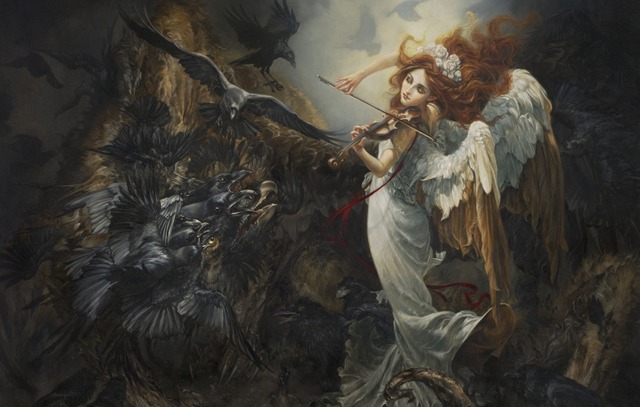 How One LDS Artist's Inspired Work Is Helping Others Discover God

As a little girl of four or five, Heather Theurer had a vision for what she wanted in life. She knew the answer to the age-old, grown-up question, "what would you like to be when you grow up?"

"My answer?" she says, "'I’m going to grow up to be a famous artist someday.' And often, as parents will, [my parents] very kindly patted me on the head and responded, 'Oh, that’s nice,' most likely not expecting anything to come of it."

A daughter of a professor of engineering and an inventor, Theurer's aesthetic and artistic nature sometimes ran at odds with her parents' expectations. 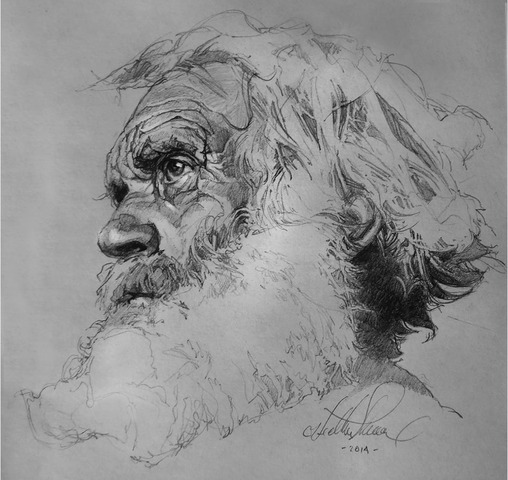 "But art was in my blood," Theurer says. "[Still] both of my parents appreciated my vigor for creativity and supported my choice. Looking back over the years since then, though, I am surprised at how much my father’s influence and career affected what I produced. To him, logic was beautiful and physics was creative . . . but everything I create has its origins in reality and is governed by logic, a natural side-effect of the culture of my family and my desire to make the 'reality' in my imagination a reality in paint."

A self-taught painter, Theurer's drive and imagination have taken her far, drawing the attention of some rather big and exciting companies.

Like many little girls, Theurer grew up loving Disney movies and Disney princesses. But it wasn't until five years ago, when a Disney employee approached her booth at the San Diego Comic-Con wondering if she ever considered drawing portraits of Disney characters, that she found a way to combine her childhood loves. 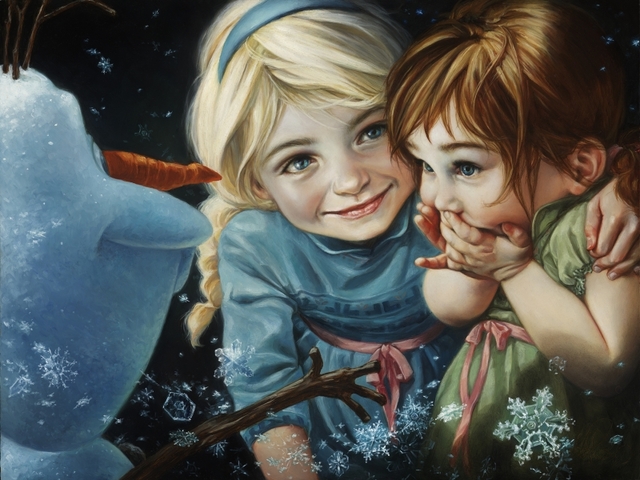 Theurer soon joined the ranks of Disney Fine Art where her official portraits of Disney princesses have gained considerable attention for the whimsy, vividness, and magic they capture.

The source of Theurer's inspiration comes from her day-to-day life, and Theurer keeps a journal full of ideas she wants to pursue in the future. Her kids, her dreams, her family, her experiences--everything fuels Theurer's creativity and "the alternate universes that spawn inside [her] imagination." 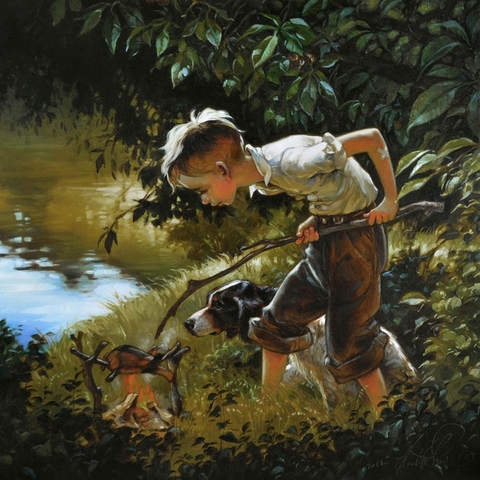 "More than any of the things that inspire me and my artwork is the one truth that I think has always been with me, even through the dark times of self-doubt and in my early years of discouraging artistic wandering," Theurer says. "And that is that I know that my Heavenly Father gave me something special."

But it took time and patience for Theurer to realize this within herself. "This, in my opinion, is the way all 'talents' begin," Theurer says. "According to the parable of the talents, we, like the servants, have all been given something, whatever it is (and we must discover it!), and we are required to do something with it."

But why spend so much time developing these talents? "I realized that it all came down to what I believed about God and His plan for me," Theurer adds.

This was a fact that became solidified in Theurer's mind six years ago, when she awoke from a dream with the overwhelming urge that she had to paint what she saw. The result was a stunning work, entitled Temptation.

"I didn't know why, really. It was an amazing dream, but it wasn't particularly religious in nature or even at the time, to me, particularly meaningful. But as I began to paint it, the meaning of it was revealed to me, in what I previously had envisioned as only a myriad of seemingly insignificant details. I would stare at it and get emotional because, in reality, it was an answer to something I'd been struggling with and had prayed fervently over. It was, literally, a personal revelation." 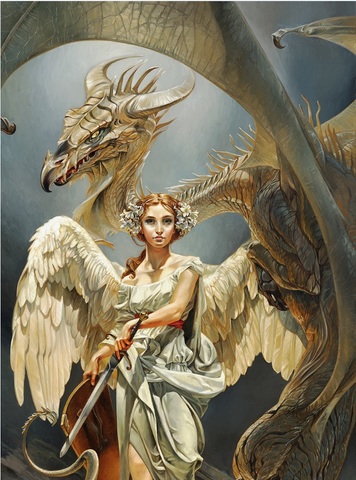 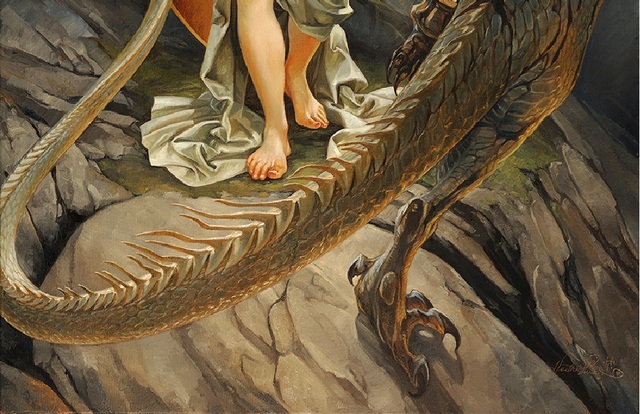 Then, Theurer received the prompting to take the piece to her next show, though the idea of displaying something so personal, vulnerable, and spiritual filled her with stress and fear. But, after following her prompting, something incredible happened.

Thankfully, the painting was well received, but that wasn't the highlight. Over the course of three days at the show, a gentleman returned several times to view the original, and when he finally decided to approach me about purchasing it, he mentioned that he could tell there was something meaningful in the painting, but he didn't know what (as the image is rather representational and not literal), and he wasn't going to buy it until I had explained it to him.

So, I did. Tearfully, no less, because the freshness of the experience on my own mind, and in front of a thousand passersby. When I finished, he turned to me and said: "You know, I've always kind of believed that there is a God. I don't know who or what He is, or what He even means to me, but when I look at your painting and hear your story, I want to believe in your God."

After that moment, Theurer realized that, though her faith had always influenced her artwork, in a profound and real way, her artwork could also influence and inspire her faith. "My faith changed," she says. "I was changed. I know that God lives because He cares about what I create and is willing to speak to me through it."

Temptation became the first of a series of five paintings, all of which generated similar responses and experiences where Theurer could share her faith with those who viewed her work. Her culminating work, Triumph, stood at an awe-inspiring 7 feet tall and 3.5 feet wide. 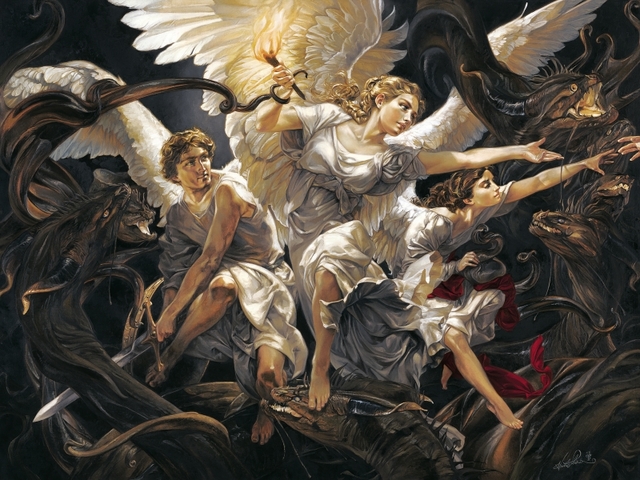 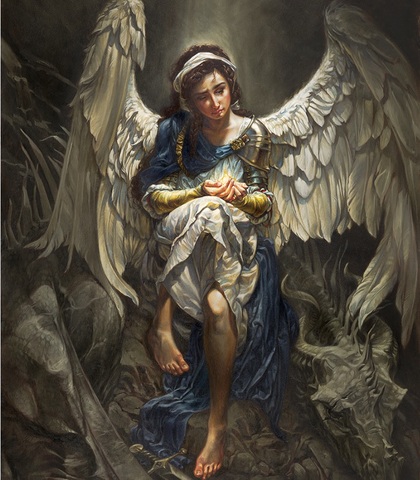 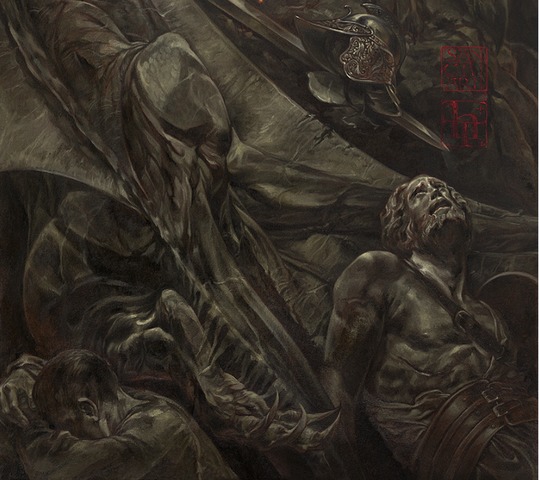 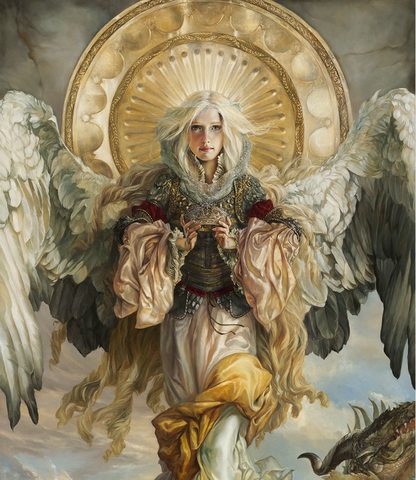 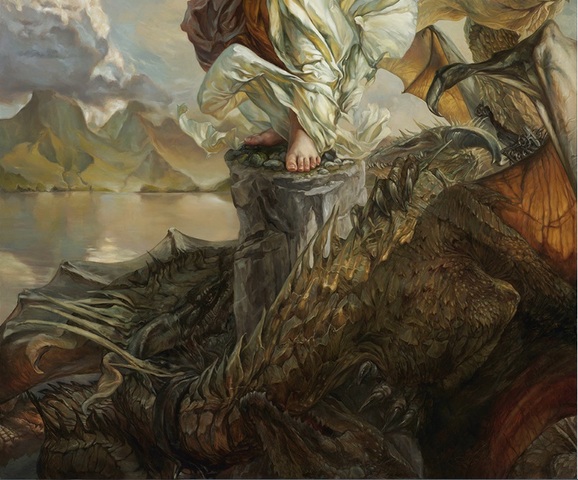 Theurer currently lives in Las Vegas, Nevada, where she works at her own art studio. There, her art continues to have a positive, uplifting effect on those who are fortunate to come across it.

"If there's one thing I've learned over the years, it is that God is concerned with the details of our lives--down to the minute," Theurer says. "We all make mistakes, and boy, have I had some doozies, but if we could envision the veil lifted for just a fraction of our lives, I think we'd get a better view how intricately our lives are tied to each other and to our Savior and our Father in Heaven. Every tug we make on those tiny threads have an effect on the fabric of eternity, so we should all be tugging in the right direction! I strive to do that through my artwork."