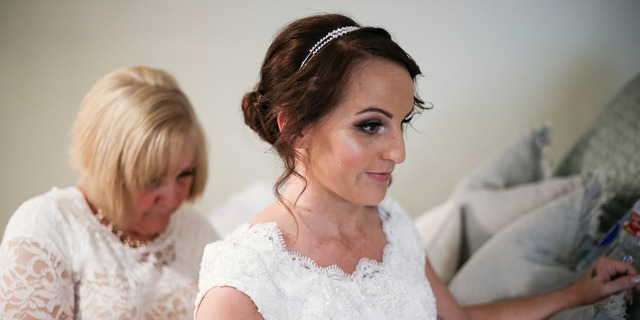 “I don't think that cop will ever know what he did for me,” Whitney says. “He saved my life that night.”

Inside an old brick chapel in American Fork, Whitney Morrill sat near the back of the LDS congregation, waiting on the clock. Whitney felt sick, which was normal for her. She knew what she needed and where to get it. She just had to get through sacrament meeting first.

A man was at the pulpit, speaking. She pretended to listen.

She could keep it together for an hour. She’d been doing it for years.

Somebody coughed. Papers shuffled. Children whispered, shushed by their mothers.

Her own mom glanced back, making sure Whitney was still there.

She fidgeted in the pew by the side door, where she sat with her new husband every Sunday. Today she was wearing her favorite dress, blue and maroon, to the calf, just tight enough to show how fit she was at 26, after three babies.

Her kids weren’t around, but that was normal, too.

Her back throbbed. She used to see a pain specialist, after the surgery, but the drugs he prescribed were never quite enough.

Air flowed back into the room. The organ hummed to life. The congregation sang. She’d grown up with them. Now they seemed far away, in their small-town bubble, where nothing bad ever happened if you were a good person, and if it did, you just turned that frown upside down.

Amen, she said, and rushed outside, into the cold of February 2014.

Her husband drove the minivan down clean, tree-lined streets, then north on I-15. Someday, she told herself, she’d get it together.

It was about to get much worse.

Just off the freeway, in downtown Salt Lake City, he parked at The Gateway mall.

Across 200 South, past the TRAX line, people huddled in clusters outside the shelter and the soup kitchen, which faced each other across Rio Grande Street. A road to nowhere. Whitney’s heels clicked against the asphalt, carrying her into what felt like a Third World country. People here called it “the block.”

“What do you need?” a man asked, urgently. The air smelled rotten. People shuffled along, eyes flat.

The couple stuck to their usual route — 200 South to 500 West, south past the men’s side of the Road Home shelter, east through the Rio Grande parking lot, then north between the family side and the St. Vincent de Paul Dining Hall. Here and there, men stood like sentinels, repeating the question.

“What do you need?” another asked, pressing. “Black? White? Glass?”

After less than 10 minutes, Whitney and her husband hurried back to the van with two 0.2 gram "pieces" of black-tar heroin, wrapped in twists of black plastic, enough to get them through the day. Soon they would park outside a gas station or under a tree and shoot up in the back seat, sinking into oblivion, still dressed in their church clothes.