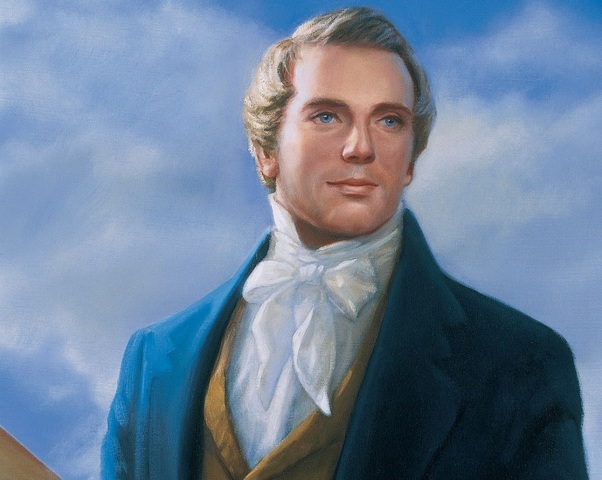 There are very few things I can stand at a pulpit and testify I know are true. Among them are that I know my Heavenly Father and Heavenly Mother love me with an infinite, unfathomably deep and perfect love, and they are far more merciful to me than I deserve. The second is that I know that Jesus Christ, my brother and Savior, died for me, knows me—my pains, shortcomings, sins, weaknesses, joys, and strengths—entirely, and that He has never and will never abandon me.

For now, that is all I can testify to know. But there are many things I hope in, several beautiful truths I believe in, act on, and cherish. And then there are those truths I still pray to find peace about. Among that latter group is my belief that Joseph Smith was a prophet called of God.

I've loved the story of Joseph Smith—that someone could take a man so humble and imperfect and transform him into a seer, revelator, and the Lord's mouthpiece on the earth today. I've admired Joseph Smith's dedication and courage to give his all for what he believed. I'm in awe of his humility to accept chastisement and continue trying, despite imperfections, limitations, and mistakes. I've wept over all he lost, all he suffered, and all he had to give.

And yet, there's always been this gap in my testimony, this weak point when it came to Joseph Smith. My patriarchal blessing promises that I will gain "a sure testimony that Joseph Smith was the prophet called of God to usher in this last dispensation," but even after studying, researching, and praying for a more sure witness of the Prophet, my testimony remained unsure. Recently, while studying Teachings of Russell M. Nelson, I came across a few insights that have helped deepen my belief that Joseph Smith was called of God. In honor of Joseph Smith's birthday on December 23, I would like to share President Nelson's words with you, in the hopes they will help strengthen your testimony as they have mine.

One of the Most Remarkable Aspects of the Restoration

"I was teaching a missionary discussion to a woman from Great Britain. I was teaching about the Lord Jesus Christ and how He had restored His gospel through the Prophet Joseph Smith. She really liked the teachings of the gospel, but she had a hard time accepting the Prophet’s First Vision. She said she could believe in the Restoration more sincerely if God the Father and His Son Jesus Christ had appeared to the Archbishop of Canterbury!

"Actually, the fact that the Father and the Son appeared to an untitled youth is one of the most remarkable aspects of the Restoration. Joseph Smith did not have to 'unlearn' anything. He was tutored personally by Them. Joseph was also tutored by other heavenly messengers, including Moroni, John the Baptist, Peter, James, John, Moses, Elias, and Elijah. His mission in mortality was foreordained. His pristine mind was receptive. But, by worldly standards, Joseph was most unlikely. And his task to be the Prophet of this last dispensation seemed totally impossible. . . . This pattern is one the Lord has used repeatedly throughout history." (“The Lord Uses the Unlikely to Accomplish the Impossible,” BYU–Idaho Devotional, January 27, 2015)

Miraculous Translation of the Book of Mormon

"In contrast, Joseph Smith translated the Book of Mormon at the rate of about nine pages per day, completing the task in about eighty-five days! (Many of us feel good if we can read the book in that time.)

"Such a pace is even more remarkable considering the circumstances under which the Prophet labored. In that same period, while enduring constant distractions and incessant hostility, Joseph Smith moved more than 100 miles from Harmony, Pennsylvania, to Fayette, New York. He applied for a copyright. He received revelations comprising twelve sections of the Doctrine and Covenants. Heavenly beings restored the holy priesthood. Yet he completed the translation in less than three months." (“A Testimony of the Book of Mormon,” Ensign, November 1999)

All We Have Because of Joseph Smith

Do you realize that we have received more pages of scripture through the Prophet Joseph Smith than we have from any other prophet? As a result, we understand eternal truths that would otherwise still be obscure or unknown. . . . Perhaps we could mention a few.

Through the ministry of the Prophet Joseph Smith we know that—

• The purpose of life is to attain joy—as individuals and as families (see 2 Nephi 2:25),

• The priesthood is an everlasting principle (see Alma 13:7).

• The land inheritance of Joseph, son of Israel, is no longer a mystery. His inheritance was not in the Middle East, among that of his brothers, but was here on the American hemisphere—a land choice above all others (see 1 Nephi 2:20; 13:30). It was choice, not because of spectacular scenery or natural resources, but choice because it was chosen as a land reserved for God’s righteous children to worship Him, chosen as the repository of plates from which the Book of Mormon was to be translated, chosen to be world headquarters of the Lord’s Church when restored in the dispensation of the fulness of times.

• The covenant God made with Abraham some 4,000 years ago, to bless all the nations through his seed, was not to be fulfilled until these latter days (see 1 Nephi 15:18),

• Jesus the Christ will again reign personally upon the earth (see Articles of Faith 1:10), and that

Incredible! To me it seems almost inconceivable that any sincere and inquiring mind could doubt the prophetic mantle of Joseph Smith. (“Praise to the Prophet,” Seminar for New Mission Presidents, June 25, 1994)

While my testimony is still in progress, I am grateful for a living prophet who can better help me understand the man who restored Christ's Church on the earth today.