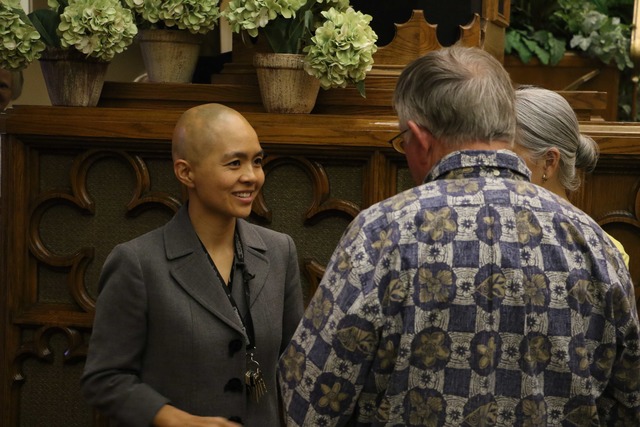 One of Melissa Wei-Tsing Inouye's life "crossings" came when she encountered a faith crisis while doing her undergraduate studies at Harvard University.

Inouye became deeply troubled after learning some details involving the practice of plural marriage in the history of The Church of Jesus Christ of Latter-day Saints. She sought out her friend, mentor and fellow Latter-day Saint, Laurel Thatcher Ulrich, hoping she would solve the problem.

The topic was nothing new to Ulrich, a Pulitzer Prize-winning American historian and author of A House Full of Females: Plural Marriage and Women's Rights in Early Mormonism, 1835-1870. Ulrich acknowledged Inouye's concerns but didn't offer an easy answer. This was something she'd have to resolve herself, Inouye said.

Reflecting later, Inouye realized Ulrich knew the history and was still a church member. That honest acknowledgment gave Inouye validation and helped her navigate the crisis.

Listen to LDS Living's "All In" podcast episode with Inouye in the player below or by clicking here.

The experience was one Inouye shared while discussing the themes of her new book, Crossings: A Bald Asian American Latter-day Saint Woman Scholar's Ventures through Life, Death, Cancer & Motherhood (Not Necessarily in that Order).

"I think Crossings, to me, symbolizes your physical journeys and going over divides. You can cross over distances, you've got over obstacles. You cross over boundaries and barriers," Inouye said. "I think I've learned a lot in my life about how we have to do that and how it’s worthwhile."

Like the book's subtitle suggests, anyone who sits down with Inouye can expect a fascinating conversation. Here are a few interesting facts about her:

Inouye served a mission in Taiwan and is an active Latter-day Saint wife and mother.

She and her husband Joseph are the parents of four children with botanical nicknames: Bean, Sprout, Leaf, and Shoot.

"When you're pregnant, they have these pregnancy books that say at this phase, your child is the size of a grain of rice or your child is the size of a bean. So at that phase, we started to call the baby 'the bean.' Then when he was born, we just kept on calling him 'the bean,' and we stuck with that," Inouye said. "My husband really does like the garden. But um, yeah, we eat vegetables. We do not eat our children."

Inouye received a doctorate in East Asian languages and civilizations from Harvard and is a senior lecturer in Asian studies at the University of Auckland in New Zealand. She has studied the history of Chinese Christianity, global religious movements, women and religion, and has written extensively on such topics.

Inouye is also battling colon cancer. For the last year her cancer has been in remission, she said, but unfortunately, it now appears to be returning. She is keeping a positive outlook and putting her trust in God, she said.

"I realized the other day that being deathly ill makes you a lot more vulnerable, which makes you a lot more dependent. In my life, I usually feel quite self-sufficient and independent. So feeling completely dependent on God's grace is something that has come with being deathly ill," Inouye said. "It’s a kind of different feeling, definitely a spiritual feeling. Nobody wants to have that feeling. We all have this theology, right, that we learn from adversity, and life is about challenges. But many of life's challenges we would never ever choose to face."

The cancer motivated her to write Crossings, a collection of personal experiences, essays, and family newsletters, which even include "doodles" she drew in the margins of those letters. She wrote the book with her children in mind. She also wanted to capture a Latter-day Saint life in its many possible iterations: as a child, parent, friend, disciple, and scholar, in many times and places, she said.

"I supposed one of the reasons I am writing about my life is because I am aware that many people, including young people and perhaps, someday, my children, may at times wonder whether this is the sort of life for them. I am also aware that friends and family members of different religious or philosophical persuasions may sometimes wonder why on earth I have chosen to throw in my lot with the 'Mormons,'" Inouye wrote in the introduction. "I can't prescribe a life for anybody, but what I can do is share how I have found the fruits of this life to be worthwhile — costly, to be sure, but also rich and nourishing, a source of deep joy." 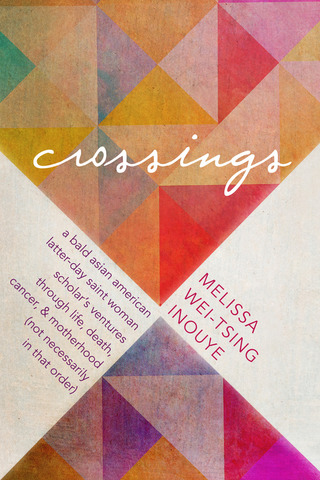 Crossings is divided into five parts.

In "Part One: Going Places," she talks about events in her early life that shaped her testimony and faith, including her mission to Taiwan. She tells one experience where she picked up a new sister missionary who was struggling to adjust to mission life in a new country. When Sister Inouye delivered her "We work hard and we love it!" speech, tears rolled down the new missionary's face.

Inouye learned it's possible to be a "big jerk," even when you are trying to do the right thing.

"How can someone who is supposed to be representing Jesus Christ make someone feel this way?" she said. "I changed my outlook and tried to become a better missionary and better person."

The second part, "Staying Home," chronicles Inouye's journey as a mother. Among her letters to her children and annual family newsletters, mothers will appreciate one chapter titled, "Four Songs That Will Never Let You Down."

Part Three is "Thinking Things Through," and covers a period where Inouye's family moved from Hong Kong — where her husband, a corporate lawyer, was the breadwinner — to her accepting her first full-time job at the University of Auckland and becoming the main provider. She also shares some of her writings that address some of the difficult faith questions facing truth-seekers today.

Part Four, "Getting Disemboweled," recounts her battle with cancer.

"Looking to the Future" is the title of Part Five.

Crossings was published jointly by the Neal A. Maxwell Institute for Religious Scholarship and Deseret Book as part of a series called "Living Faith" books. Inouye is honored to be one of two female authors in the series, she said.

Inouye hopes readers will come away from Crossings with greater hope for the future of the church and its global fellowship.

"Our past history has taught us what it means to make crossings over prairies, rivers, mountains, jungles and seas. Future challenges will test whether we are able to make similar crossings over cultures, languages, racial divides, national borders, worldviews, and time," Inouye wrote in her book. "A gospel that is true is a gospel that will withstand and adapt to such rigorous tests. The question is whether we will be courageous and hardy enough to undertake the new treks the gospel requires. With all my heart, I pray we will. Shoulders to the wheel!"