The Flood That Changed Everything

A week later, Tami got the news that a large storm had hit Idaho. Her parents’ home in Rexburg, which her sister’s family was living in while her parents were presiding over the Mexico Cuernavaca Mission, had flooded.

Tami was running errands with her husband when they got the news, and she began screaming and crying because she was so angry. “How could God do this to my family?” she said. “My dad was a mission president; how could He do this?”

As these thoughts festered in her heart, a wave of peace washed over Tami. “I knew then that only good would come of this flood,” she said. “It was the first time that I had felt the Spirit or anything like that in a very long time.”

A day or two later, Tami had a distinct impression to look under her bed. Sitting there were her scriptures—the ones she couldn’t find in her attempt to burn all tangible connections to the Church. She pulled out her Book of Mormon and “literally blew off the dust.”

On her shuttle ride up to Rexburg to help with the flood, Tami listened to EFY music. “I cried the entire way, tears streaming down my face with this busload of people . . . my heart changed. That was the first little change of heart that I had.”

Before she got to Rexburg, Tami texted her brother: “Holy crap. The Church is true, isn't it?”

He texted back: “It is! What makes you say that?” 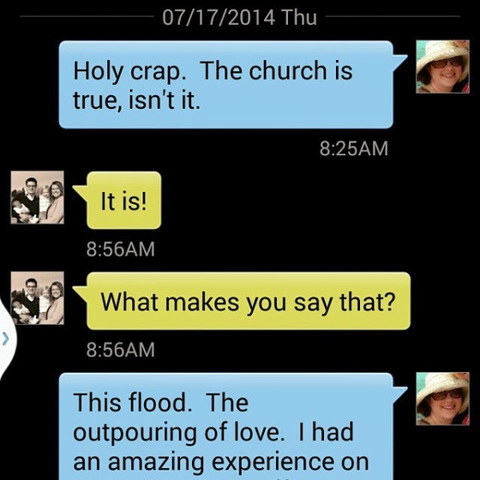 An Analogy of the Atonement

Tami got to her parents’ home and was shocked by the damage. Since her sister was living there, her parents had moved all of their belongings to the basement. The flood covered it all, filling the basement with eight feet of water.

When Tami got there, she could see the water line of debris on the soaked drywall, almost as high as the ceiling. Grass was stuck to the walls. The floor was covered in mud, inches deep. Tears streamed down Tami’s face. “It was a muddy, disgusting, hopeless mess,” Tami said. “I just didn’t have a clue how it could be made whole again.”

Bucket by bucket, however, they hauled out the mud. “I saw strangers who didn’t know our family sift through pictures and lovingly place paper towels between each page of a journal,” Tami wrote. She realized, “This is what the Church teaches. This was Christlike love that I was witnessing first hand.”

The restoration company came in with a sewer pump. They squeegeed the floor and stripped the walls to the studs. Eventually, they were able to rebuild the entire basement.

“It became such hallowed ground for me,” Tami said. She knew she was that basement—a hopeless, muddy mess that could become new again.

Tami had a “brutal” talk with her sister and brother-in-law as she stayed at their house.  Tami didn’t have a good relationship with either of them at the time, but this was a turning point in their relationship. Afterwards, she felt that she could prove that her change of heart would, this time, last. “I don’t exactly have the best track record,” Tami wrote. “I was just so glad that they gave me another chance.”