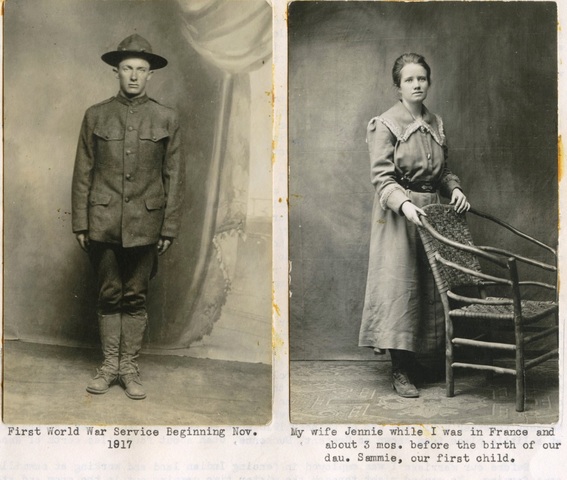 November 11, 2018, marks the 100th anniversary of the armistice that ended the fighting of the First World War, "the war to end all wars." At the 11th hour of the 11th day of the 11th month, the guns fell silent. Still, it would be another seven months before my grandfather, Samuel Thomas Roberts, received his discharge papers and his ticket home.

On April 6, 1917, President Woodrow Wilson signed the war resolution passed by Congress and the United States entered the war. "I received my greeting from Uncle Sam and left Roosevelt (Utah) on the first of November, 1917 to serve in the Armed Forces of the United States of America," Sam Roberts recorded in his personal history.

Only two years before, on October 6, 1915, Sam had married his sweetheart, Eliza Jane Taylor, at her father's home in a little place called Crescent, Duchesne County, Utah.

They made the journey to Manti that December and were sealed in the Manti temple on December 23, 1915. Jennie, as she was known all her life, was expecting their first child when Sam left Utah for Fort Lewis, Washington. 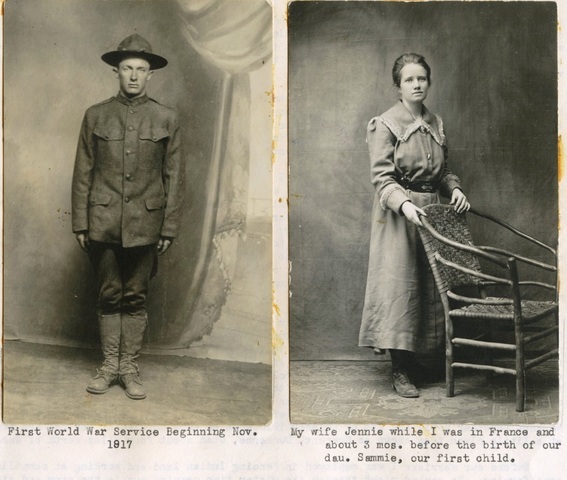 From Washington Sam traveled to Long Island, facing the bitter New York winter to continue his training. “Just as I was wondering how was the best way to freeze to death, they called for volunteers to go to Newport News, Virginia,” Sam writes. “I was the first one to step out and volunteer.” Sam spent several months in Virginia before finishing his training in France.  “On the fifth of June,” he writes, “we went to the battle front." 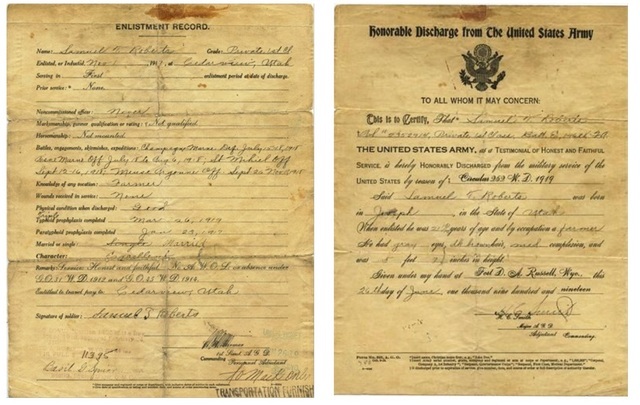 While waiting to go into battle, Sam became acquainted with a Frenchman named Marcel Forissier. Sam’s devotion to his faith impressed the Frenchman, and on June 27, 1918, Marcel sent the following letter to Sam's family in Cedarview, Utah.

Dear Sir, I have had the honour to become acquainted with your son Samuel, who is actually in my little town, waiting the derpature for the front. I cannot resist to tell you that I like very much to speak with him and his friends from Utah country. Whatever, I am a Catholic, we are talking together every day, about your Mormon religion and I am very interested and moved by the Faith of which your son is spirited. So, am I glad to tell you that your dear son is behaving himself as a good American citizen and good Mormon, and I will keep the best remembrance of him. When the Victorious War will be over, I will go to visit your beautiful country. I hope that at this time, I shall can to say again to you, by word of mouth, the very high esteem that all the Frenchmen are grateful for the Fair and the Thankful America, and particularly for Utah's people. I am, Dear Sir, Yours very truly in Jesus Christ Marcel Forissier

As far as we know, Marcel never made his visit to Utah, but Sam, and then his daughter Lena Roberts Bartholomew, kept the letter and entered it as part of his life history.

"It was after I went to the front line trenches that I got news of the birth of my first child on July 13, 1918," Sam said. "They named her Sammie ‘T’ after me. My dear ones at home had not seen me once since I left them and they didn't know whether they would ever see me again so they thought I should have a namesake even though it happened to be a girl. It was just as well, for we never were blessed with a son."

Sam was assigned the job of "powder monkey" on the front, loading powder into a big gun. "While I was on the battlefront I had many narrow escapes and faith promoting experiences," Sam wrote. "I was . . . just leaning on the barrel of the gun one day. I was the only one there with the gun . . . I had to stay and guard the gun. . . . And I was standing there and a piece of shrapnel broke out back of me a ways. That shrapnel hit both sides of that gun barrel, one on each side of me. 'That was pretty close,' I thought." 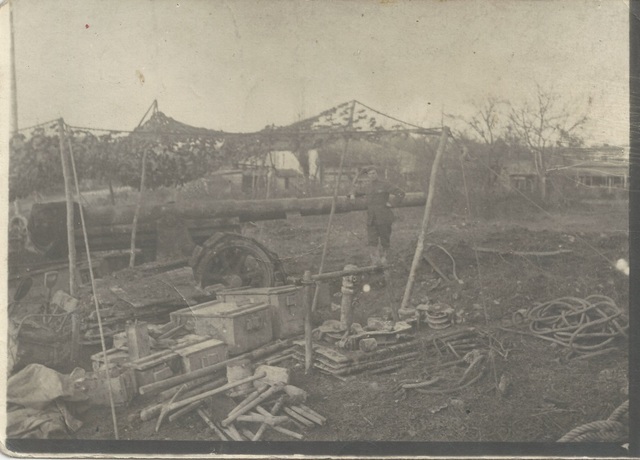 Sam Roberts standing near a gun during WWI in France.

Sam and his friend, George Wallace, from Salt Lake City, received their patriarchal blessings "just before we left to go on to the front." Together they witnessed the protecting hand of the Lord and the fulfillment of "a lot of things mentioned in both his Patriarchal Blessing and mine."

While describing a battle, Sam wrote:

"Just over on a little hill about 75 yards away, there were some 75's cannon . . . we (were driven) away from our gun and we'd congregated right in the edge of a forest. There was a swale there, and we all got in that swale. . . . (But) there were two men out there with (those) guns. They got a direct hit on. And they (were) hollering for help. 'Come and get us, come and help us.'

"Nobody would go, and there was me and another guy, a fellow with a name of Jimmy Collins. He says, 'Let's go get them.'

"And I said 'All right. When that next shell lands, we go; maybe we can get back before the next one comes.'

"But anyway, when that shell came, we ran over there, and the shell busted and it splattered me and the other guy both . . . we got this guy on the stretchers, and we ran with him. We got [two wounded].  . . . They'd both been hit, that's why we went over there, 'cause if they could have run, they would run.

"That's one time I disobeyed orders; that lieutenant bawled us both out, but it didn't do him any good. We told him, '[They were] hurting . . . and they needed help, and we went and got them.' . . .

“The ambulance couldn't have got them where they were, . . . and they probably [would have] been shot to pieces time they got up there. Oh, I found lots of men, we did anyway.

"Sometimes we'd be alone or with somebody, that was shot all up and they had to have help right now. You don't question, to see if you're in danger when you have somebody hollering for help; you go help them. And that's what we did!"

At the Home Front

Describing his time in France, Sam wrote, "We landed in France the fore part of March, 1918; and we went on the Front . . . from one Front to another, continuously, back and forth, from one place to another . . . until the Armistice was signed on November 11, 1918."

Sam’s discharge still wouldn’t come for another seven months, as his group continued to push into Germany. Finally he returned to American soil and “the blessed day of my discharge came in June 1919 when I got my papers at Fort Russell, Cheyenne, Wyoming," Anxious to be reunited with Jennie and meet little Sammie, Sam took the train to Price, Utah. He wrote:

"My wife and daughter met me in Price where they had met every train for days looking for my arrival. I happened to arrive on an early morning train which they had missed. My sister, Gertrude, saw me coming down the street and she dashed out to meet me. She always was swift on foot for she was able to bound over the fence into my arms and back [to Jennie], grabbing Sammie, and to me again before my wife could get to me once. In all the rush and excitement my little daughter was frightened to pieces, but before the day was over she called me daddy, instead of my picture, and we were inseparable." 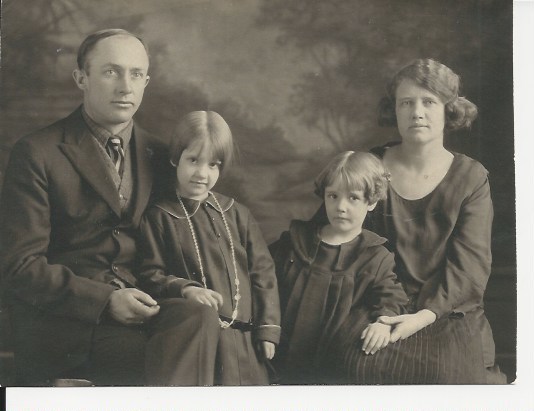 In the years following the war, Sam and Jennie added two more daughters to their family, Lena, who married Elden Bartholomew, and Betty Rhae, who married Thomas Jay Newman. On February 7, 1937, at age 19, "our oldest daughter, Sammie, succumbed to flu and pneumonia. This loss was so deeply felt," Sam writes. 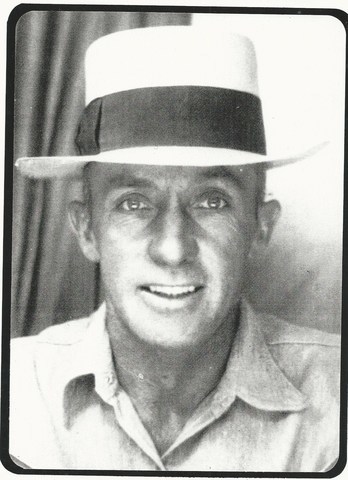 After his death on October 13, 1972, his daughter Lena wrote: "Samuel Thomas Roberts left his family the most important heritage any father could ever leave—not of worldly wealth, but of love, caring, helping and . . . a positive attitude."

Always faithful in his Church service, Sam Roberts continued to live as he had as a soldier: "You don't question to see if you're in danger when you have somebody hollering for help; you go help them. And that's what we did!"

Remembered as a Hero

While serving in the Salt Lake City Headquarters mission, 2015 to 2017, we became acquainted with Brother Jean-Jacques Fournis and his wife Adeline from the village of Plouigneau, in Brittany, near Brest, France. We shared family stories, including stories of Darrell's grandfather, Samuel Thomas Roberts.

From September 22 to 30, 2018, Fournis and his friends celebrated the centennial of the end of World War I with an exposition in their village. Wanting to honor the Americans who aided France during the war, Fournis contacted us. "I want . . . to honor our friends' heroes, then why not choose Samuel Roberts," he wrote. 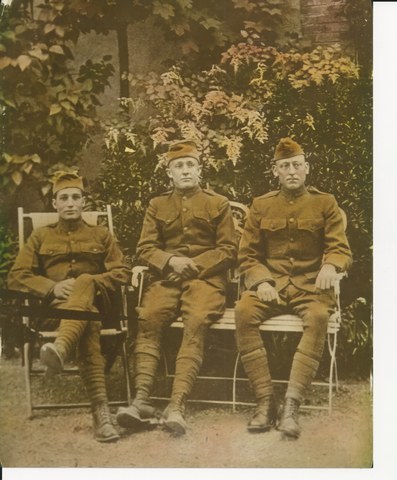 Sam Roberts with George Wallace and Will Holgundegrus, courtesy of Jean-Jacques Fournis.

So, 100 years following his service, Samuel Thomas Roberts, a soldier and member of The Church of Jesus Christ of Latter-day Saints, was chosen to represent his nation and his Church in a village in France.  And for us, his descendants, Grandpa Sam Roberts will always be a hero.