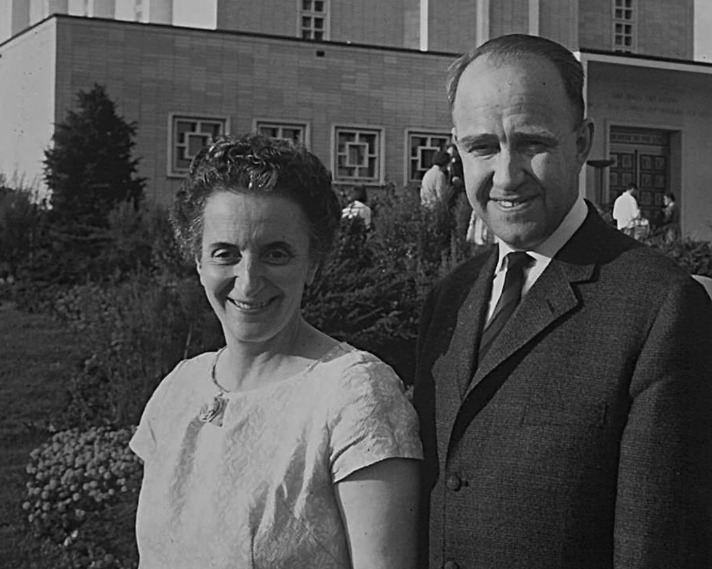 Agnes Veronika Erdös and Gustav Palm experienced World War II under vastly different conditions: she as a prisoner in a concentration camp and he as an SS soldier. Amazingly, the two would fall in love, help each other heal, and embrace a common faith in God that would lead them to find The Church of Jesus Christ of Latter-day Saints.

Agnes Erdös was an only child, born of Jewish parents but baptized into the Catholic church with her family when she was 9 years old. Though she lived a rather carefree childhood, her life was turned upside down when Hitler invaded Poland. Because of their Jewish descent, she and her parents were treated as Jews and were sent to a ghetto in Nazi-invaded Hungary.

In 1944, SS soldiers emptied the ghetto where Agnes and her parents had been living, whisking everyone onto a freight car and from there to a warehouse in Zalaegerszeg, Hungary—their first stop on the way to Auschwitz.

In distant Norway, when news of war between England and Germany came, Gustav Palm felt it was far away and cared little about it. But when Germany invaded Norway, Gustav, with little political knowledge and no one to turn to for advice, decided to join the National Socialist Party, which he found full of bold ideas and ambitious members.

In 1941, Gustav was offered a job as a traffic policeman in the city, where he was confused to be put through harsh military training. However, Gustav’s first assignment in 1942 was not as a traffic policeman, but as a guard at the newly opened Berg prison camp. He quickly realized, “We, as guards, were also prisoners, even though technically we had our freedom. None of us had voluntarily sought the task we were tricked into. The Nazism I had been in contact with so far was not at all what I had imagined it to be. I had simply been very naïve. I was now fully convinced that the organization to which I belonged was wrong.”

To escape life as a prison guard, Gustav joined the Waffen-SS Ski Ranger Battalion Norway. He believed that he “would be able to support Finland’s cause against Communism but had to do so in the uniform of a Nazi Waffen-SS soldier.”

After being held in Zalaegerszeg for three weeks, Agnes and her family were loaded onto another railcar with the rest of the Jewish prisoners. The next morning, hours away from entering Auschwitz, Agnes’s father woke her to give her a father’s blessing.

Though it was not written on paper, the words of the blessing were recorded on Agnes’s heart: “Father told me that in spite of much suffering, I would survive. I was young and of a pure heart. Father’s spirit would protect me so that I would eventually find ‘the truth.’ He assured me that in the future, we would be reunited with God and His Son Jesus Christ.” Though she didn’t realize it at the time, her father’s blessing would become a lifeline for Agnes. She reflected on its words many times throughout the war and drew great strength and comfort from its promises.

A week after arriving in the Waffen-SS boot camp in Hallein, Gustav became severely ill with scarlet fever and diphtheria, quickly followed by a throat disease. When he finally recovered enough to return to camp, the officers found him too weak to train and sent him home to his family in Onsöy, Norway, for a few weeks. Gustav was grateful for this experience: “Because I was sick, I did not deploy with my unit when they were sent to Finland to fight the Russians. Later, I found out that my sickness was a blessing in disguise because everyone in that unit, save just a few, was killed.”

Arriving at Auschwitz, Agnes and her mother were placed in a line with the old and weak women destined for death. At her mother’s urging, and to the astonishment of fellow prisoners who had just seen others shot for the same act, Agnes safely dashed across a platform to join the healthy line. That was the last time she would see either of her parents.

Not long after her escape to the healthy line, she left the group to find a better barrack to sleep in. When morning came she felt prompted to leave, later recalling, “Israel’s God had heard my father’s blessing thus far, and there it was fulfilled. Once again, I was comforted. Had I remained where I slept the first night, I would have ended up in the gas chambers. I was overcome with a peaceful feeling that I also felt many times during the remaining period of my captivity.”

When Gustav was transferred to the front lines, he was discouraged, recalling, “I thought morosely, ‘It is here I shall either live or die.’” He was chosen with six others to head what was deemed a suicidal attack on the Russian front. As they stormed down a hill, Gustav remembers losing his helmet in the middle of all the gunshots and tanks. He made it to the valley, but a bullet grazed his face and another pierced his thigh. “As sure as I lived, I could have been dead,” he says. “I also clearly remember feeling ordered by someone during my attack to take a step to the right. Which I did. That probably saved the bullet from hitting me directly in the face.”