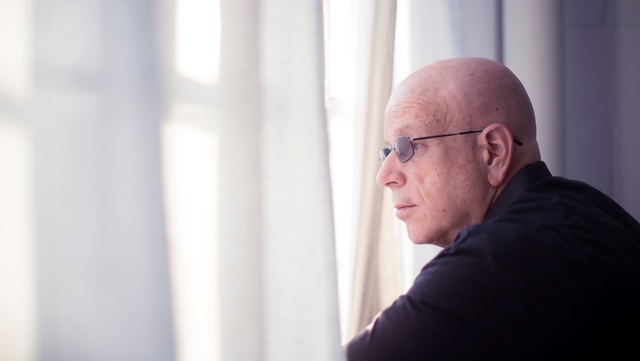 “Is this a prank?” Steve “Dusty” Smith wondered. He was surprised—and confused—as he listened to the woman on the phone telling him that President Dieter F. Uchtdorf, then-second counselor in the First Presidency, wanted to speak with him. But once the distinct, accented voice came through the other end of the line, Smith knew it wasn’t a joke. He was speaking to an apostle, and President Uchtdorf had just one question for Smith: would he share his story?

Smith gave a brief overview of the last quarter-century of his life and his unexpected journey of finding the Church, losing his testimony, actively fighting against the Church, and then returning to the gospel once more.

When he finished, President Uchtdorf asked, “Is that the whole story?”

Smith recalls, “I said, ‘No, sir. That’s just the Reader’s Digest condensed version. I figured you’re a busy man.’ And he said, ‘I want to hear your whole story.’”

With a Catholic grandfather, a Baptist grandmother, and a Lutheran mother, Dusty Smith couldn’t help but believe in God. However, growing up attending three churches that preached differing beliefs left him confused about who that God was.

But Smith cherished his faith—praying, studying, and attending church—until one day in 1980, when he received a phone call from a good friend. The friend informed him that a sweet, 13-year-old girl Smith knew like a sister had died after she ran into a glass door and a piece of glass pierced her neck.

“I can’t tell you how angry I was at God,” Smith says. “I didn’t stop believing in Him, but I wasn’t real happy with Him. Thirty-seven years later, that [incident] still brings tears to my eyes. I still see that little girl.”

Smith couldn’t make sense of how a “beautiful, smart girl with the whole world in front of her” was dead while mass murderers like Ted Bundy could still be alive. Smith stopped praying. He stopped reading. He stopped attending church. But he could not stop believing.

Three years later, however, Smith discovered something that renewed his hope in God.

After graduating from the University of Texas, Smith had gone home to visit his parents, and he was searching for something to read to help pass the time. That’s when a book fell off a shelf in his room—one he’d never seen before: The Book of Mormon. He later learned it had been given to his mother while she was on a trip to Salt Lake City, and she had stored it, untouched, in his room.

“I happened to open up the book to 3 Nephi,” Smith says. “I read [about Jesus Christ’s visit to the Americas], and I went, ‘Whoa, so He visited here? That would make sense.’” 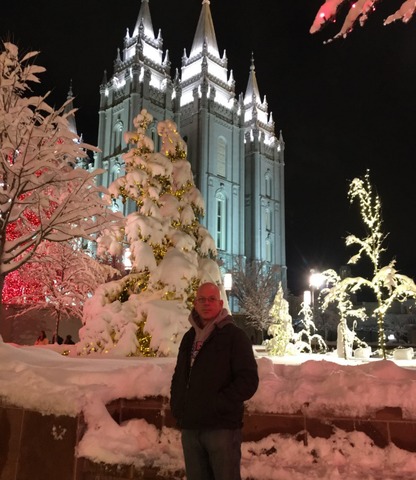 Smith was so impressed by what he read that he went straight to the phone book to look up The Church of Jesus Christ of Latter-day Saints. “It listed ‘wards’ and ‘stakes.’ That meant nothing to me, but it was lunch time, so I called the ‘stake,’” Smith recalls with a laugh. The stake president, who had briefly stopped in his office to pick up something he had forgotten, just happened to be there to answer Smith’s call and connected him with the missionaries.

Immediately, the teachings of the gospel resonated with Smith, explaining questions and dreams he had had since childhood.

“When I was a kid, elementary-school age, I used to have this recurring dream every night for a year,” Smith says. In the dream, Peter, James, and John were in heaven walking away from him as the clouds parted and a ladder descended from the heavens, leading to earth. Then a voice came, speaking to the three men, who nodded and began descending the ladder.

“I never understood that dream until I read about the Melchizedek priesthood and how Peter, James, and John came down and [restored it to earth],” Smith says. Suddenly, the nature of God, the plan of salvation, Smith’s purpose on earth—all of it made sense.

Getting Baptized and Losing Faith

In April 1983, the missionaries baptized Smith a member of the Church, but this new chapter in his life didn’t come without sacrifice.

“I gave up so much to become LDS. I had been dating a girl for two years, and she left me,” he says. “My family disowned me. . . . Our relationship took a beating.” But Smith’s conviction to the Gospel was enough to confirm this was the right choice for him.

Just a year later and already in his mid-20s, Smith had no plans to serve a mission, no funds, a new fiancée, and ambitions to become an attorney. But one day in 1984, while sitting in sacrament meeting, Smith says, “I just felt this presence, this feeling come over me, and it said, ‘You need to go on a mission.’ So I quit my job, left my fiancée, and served a mission.” 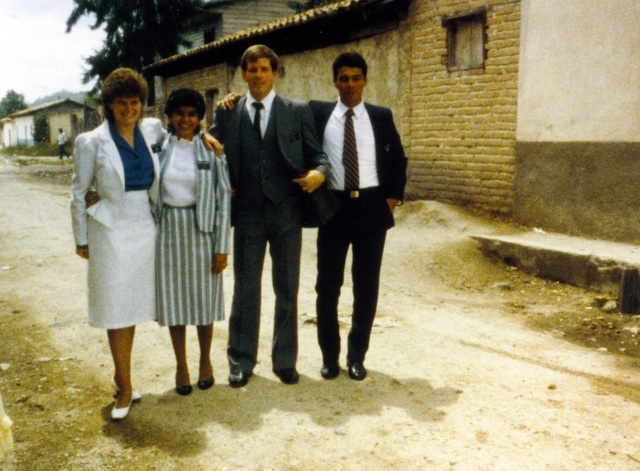 Despite acting immediately on his prompting, Smith almost returned from his mission before it even began. “When I was in the MTC, my family was against me being there. My fiancée was against me being there. I felt all alone. I went to a pay phone, and I called the Church headquarters. . . . I said to the lady that answered, ‘If nobody cares that I’m a missionary, I may as well go back home. Nobody cares I’m here.’ She said, ‘Could you hold, please?’ A few minutes later, a baritone voice says, ‘Elder, my name is L. Tom Perry. If nobody else cares, I do. Be my pen pal.’” 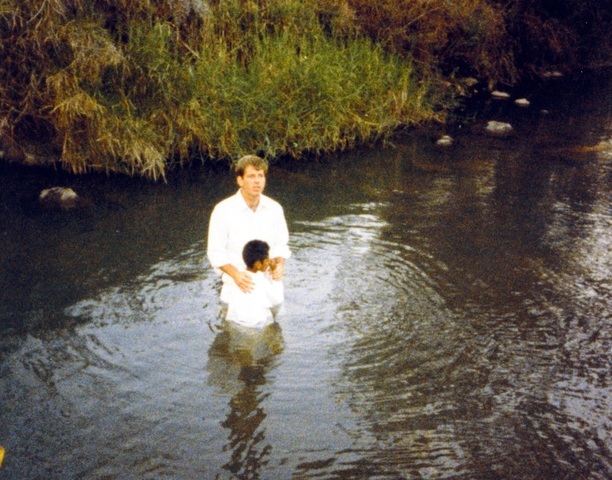 Smith would need Elder Perry’s letters of encouragement throughout his two-year mission in Honduras, a time during which his fiancée married another man and his parents divorced.

About the changes in his family, Smith notes, “That was a trip. . . . I am listening [to a letter cassette] and my parents are saying, ‘Well, it’s a great day today, son. The weather is great. We’re doing great. I’ll catch up with you in a day or two.’ Click, click. ‘Son, we’re getting divorced.’”

With his pen pal sending support from Church headquarters, Smith made it through his mission, and life took a positive turn when he got home. He dated and married a woman he met on his mission, began attending Western Michigan University Cooley Law School full time, and started a full-time job to pay his way through—a feat unheard of for those in rigorous law programs.

It was during this time that Smith attended the Hill Cumorah Pageant in Palmyra, New York. “There were a lot of anti-Mormon protestors around,” he recalls. “And I debated with them—that was my third year of law school. I came back from that wanting to be the smartest Mormon ever so I could debate with these folks and show them the error of their ways. But the more I studied, the more I discovered things that I didn’t believe and hadn’t heard before.”

Gradually, Smith descended into a spiral of anti-Latter-day Saint literature and disillusionment, angry toward the faith he had sacrificed his family, a fiancée, and two years of his life to join. Smith poignantly recalls the exact day—November 11, 1989—when he lost his testimony of the Church.

Fighting Against the Church

After losing his faith, Smith not only stopped attending church but asked for his name to be removed from membership records. “I spent from 1989 on battling against the Church. I hated the Church. It had deceived me. It had broken up my family. It had cost me so much,” Smith says.

Smith joined several online debate boards, using his skills as a litigator to tear down Latter-day Saint beliefs. He taught classes in other churches demonstrating why he believed the Church was false and deceptive. “I was very vocally anti-Mormon,” he says.

Even while actively fighting against Latter-day Saint beliefs, however, Smith’s connection to the Church never fully disappeared. On one debate board, he met a member of the Church named Mike. Despite debating viciously against one another, the two became friends. “Mike kept saying, ‘You’ll be LDS someday,’” Smith remembers. At the time, Mike’s insistence seemed not only impossible but insane.

Mike didn’t give up on Smith, however. “Every week [beginning in] 1999, he put my name in the temple,” Smith recalls, his voice breaking with emotion.

By 2005, the deep hatred Smith felt for the Church began to ebb. “I started to feel a pull to come back,” he says. But after attending church a few times, Smith still felt he couldn’t belong to The Church of Jesus Christ of Latter-day Saints. He could not receive a renewed testimony of those things he once knew. He still felt the pain that being a member of the Church had brought into his life.

But he could not shake that pull from the Spirit. In 2009, while Smith was dreadfully ill with the swine flu, his son brought two visitors into his room—missionaries who had just knocked on the door. Though Smith told them they were not wanted, the elders offered to give him a blessing. At the time, the swine flu pandemic had terrified people around the nation. But here were these two young strangers willing to love him, willing to bless him, willing to try to heal him, and it touched something inside him. So Smith agreed.

“They gave me the blessing. I was healed right then,” Smith says. “I got out of bed and walked them down the stairs.”

After the blessing, Smith tried attending church again and even met with the stake president. But when he learned he would need to undergo a Church hearing to be eligible for rebaptism, he walked away, feeling it was unfair to put him on “trial” when he felt he had done nothing wrong.

“But the pull never went away,” Smith says.