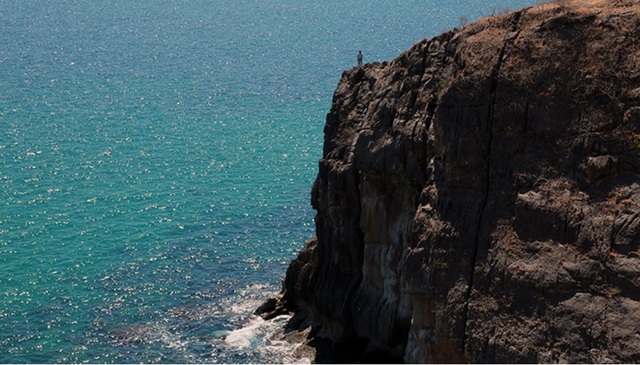 As LDS archaeologists have found sites where Book of Mormon events could have occurred, it becomes easy to visual moments in Nephi's life: when he went "down" to build his ship, when his brothers threatened to cast him into the sea, and where he worshipped the Lord.

We walk gingerly, watching every step, as we come to the edge of a cliff that plunges over 100 feet to the rocks in the Arabian Sea below. We look not far back at the sanctuary site with its slab of a rock that once flowed with water. It is also on this height above the water.

Suddenly, the events described in 1 Nephi 17 fit together in a way we’d never seen them before—and probably couldn’t have seen—unless we were right here at the best candidate for Nephi’s Bountiful.

We know well that scene of impending danger for Nephi when Laman and Lemual are so infuriated they seek to throw him into the depths of the sea (1 Nephi 27:48).

Where does that threat happen? On a beach where they are building a ship? You don’t throw someone into the depths of the sea from a beach. You throw them from a cliff, a cliff that’s so high that death is certain.