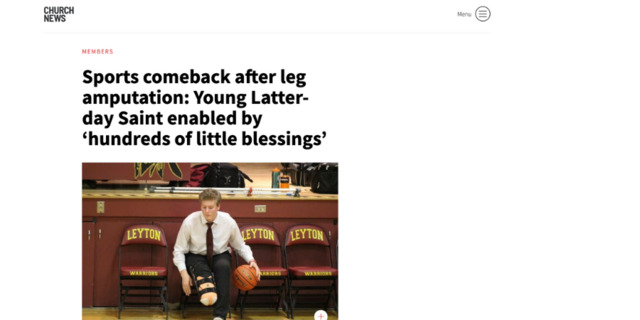 Watching his son score 26 points during a basketball game, Matt Haley knew one thing—if he looked at his wife, he knew they would both end up crying.

For Matt and his wife, Alison, their son’s victory was not just about winning a basketball game. It meant that their son had fought through trials associated with losing his leg.

Church News shared Drew Haley’s story. While playing in his high school’s football season-opening game, Drew was hit from behind. His knee buckled beneath him, and from the pain, he knew something was wrong. A doctor initially assessed it as a torn ACL, but the pain continued, and then his toes started to tingle.

A CAT scan then showed that the popliteal artery had been severed and there was no blood flow to Drew’s lower leg.

Drew’s Church family and his own family, including a brother on a mission in Argentina, fasted for him. Surgery attempted to restore the blood flow.

“I prayed for a miracle that his leg would be saved, but that was not the miracle that was given to Drew,” his mother, Alison, told Church News. “But so many other prayers were answered.”

Though Drew’s leg had to amputated, the amputation would take place below the knee, allowing for Drew to be fitted for a prosthesis which would one day allow him to return to sports.

“I tried to think of each new challenge as something to be overcome,” Drew said. “I wanted to compete and get better. I was competing against myself.”

The gospel also acted as a rock for Drew during the months of recovery.

“Being able to go to Church gave me another anchor,” he said. “It helped me from going into dark places where my thoughts would overcome me. The Church kept me in a good place.”