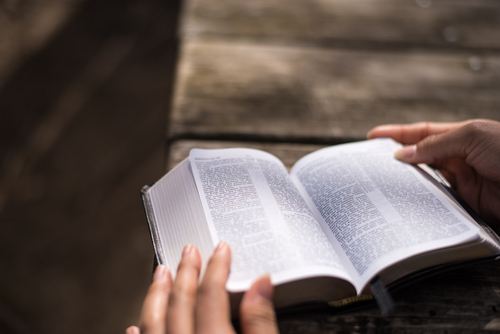 When we read the scriptures, many different words or titles are used for God. Some are used more than any others, and these names have special and significant meaning. Here are just a few and the background behind them.

If we could peel back the layers of the English text of the Bible and read in Hebrew, we’d be fascinated to learn that the familiar phrase, “In the beginning God [singular in English] created the heavens and the earth” actually reads in Hebrew, “In the beginning the Gods [plural in Hebrew] created the heavens and the earth” (Genesis 1:1).

Our modern-day scripture teaches this more correct reading. Abraham 4:1 reads, “the Gods organized and formed the heavens and the earth.”

Incidentally, the Hebrew word for God and the Arabic word for God both come from the same Semitic root word: Eloh, which we hear as Elohim in Hebrew and Allah in Arabic.

What do we learn from this fact that the Hebrew text reads that Gods created the heavens and the earth?

First, we learn that God the Father is not alone. There are other Gods that assist Him in His creative work, including Heavenly Mother, God the Son, and God the Spirit. The Gospel of John teaches this principle, “In the beginning was the Word, and the Word was with God, and the Word was God. The same was in the beginning with God. All things were made by him; and without him was not any thing made that was made” (John 1:1-3).

Second, we learn that God’s majesty is so magnificent and so beyond description that speaking of Him in the plural is natural.  Though this example is inadequate to describe God’s indomitable plurality, it gives us a taste of why it is natural for humans to speak in the plural about things that are so vast, expansive, and beyond our full experience.  We all know what a desert is.  But what do you call the world’s largest desert?  How about deserts (plural) to describe the unfathomable expanse?  That is exactly what the word Sahara means in Arabic—deserts.  So vast is that domain that it is not sufficient to speak in the singular but rather the plural.  And so it is with God and that is why the ancient Hebrews spoke of Him in the plural.

Third, we are reminded that there is more than meets the eye when we read the scriptures. The English words on the page may seem obvious and apparent to us. Yet, often there is more to learn as we faithfully ask probing questions, learn about different translations, and understand the transmission history of the Bible: “We believe the Bible to be the word of God as far as it is translated correctly” (Articles of Faith 8).

Yahweh Is the LORD

Another title for God that appears regularly in the Bible is LORD in all caps. When you read the Bible and see LORD in all caps you can immediately know that the translators were reverently representing the name of God: Yahweh. Our English word Jehovah derives from the Hebrew word Yahweh.

Yahweh is one of the most significant words in all of the Hebrew language. We hear echoes of it when Moses encounters the LORD at the burning bush of Mount Sinai and asks for the name of the God who was commanding him to deliver the Israelites from Egyptian bondage, “Behold, when I come unto the children of Israel, and shall say unto them, The God of your fathers hath sent me unto you; and they shall say to me, What is his name? what shall I say unto them?” (Exodus 3:13).

God responded to Moses, “I AM THAT I AM: and he said, Thus shalt thou say unto the children of Israel, I AM hath sent me unto you” (Exodus 3:14). In a loose translation of the Hebrew, God said to Moses, “My name is Yahweh. Tell the Israelites that Yahweh sent you.”

The word Yahweh is the present tense of the Hebrew verb “to be.” Other English translations of Yahweh’s name could include “The Self-Existing One,” “The Being,” or simply “Is.”

That sounds silly, of course, in English to say phrases without the verb “to be” such as “She a girl,” “That a dog,” “He a boy,” or “You a friend.” Instead, we appropriately expect to hear “She is a girl,” “That is a dog,” “He is a boy,” or “You are a friend.” You’ll often notice in our English versions of the Old Testament italicized present tense forms of the verb “to be” because the words do not appear in the Hebrew so the translators supplied them for us, indicated by italics in print editions. See for example Genesis 1:29 where the present tense verb “is” is italicized: “And God said, Behold, I have given you every herb bearing seed, which is upon the face of all the earth, and every tree, in the which is the fruit of a tree yielding seed; to you it shall be for meat.”

Think of the stunning symbolism and awesome reality that an entire language reserves the utterance of any present tense form of “to be” to God Himself whose name is “the Self-Existing One”: Yahweh.

So, the next time you read the Old Testament and see the word “God” know that way back when in ancient Hebrew this read as “Gods.” When you see the word LORD in all caps, know that the translators reverently did not say the name Yahweh. And when you remember that LORD = Yahweh you can also remember that He, the Self-Existing One, is the reason that all things ARE.