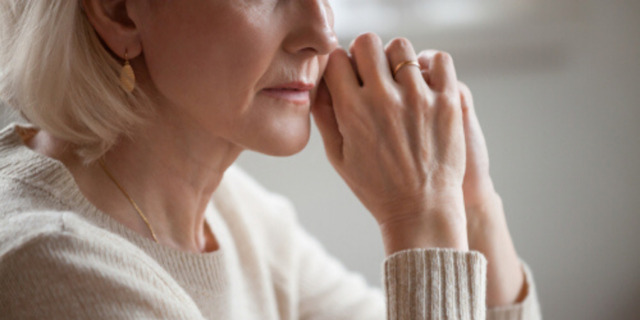 How the Lord Reminded a Widow that the Veil Is Thin

Editor's note: We’ve all heard it said, “Coincidence is God’s way of remaining anonymous.” But in his 2010 release, Divine Signatures, Elder Gerald N. Lund wrote that “sometimes, the Lord sends His blessings in such a highly unusual, dramatic, or precisely timed manner, that it might be likened to a 'divine signature.'”

“It is as though the Lord ‘signs’ the blessing personally so that we will know with certainty that it comes from Him,” Elder Lund wrote.

In the following excerpt from his book, Elder Lund shares a small moment that gave his mother comfort after her husband, Elder Lund’s father, passed away.

My father, typical of many other men from his generation, did not express emotion openly very often. In all my growing-up years, I can never remember him telling me or any of my brothers and sisters that he loved us. We knew that he did, because he was a good father. He read stories to us almost every night. He taught us to work and how to be responsible.

The one exception to his emotional reticence was with my mother. With her, he was openly expressive of his love. He would often take her in his arms in front of us and tell us how she was the best thing that ever happened to him. Then he would kiss her soundly. It always embarrassed Mom but delighted us. One of the quickest ways to trigger Dad’s wrath was to be sassy to Mom. That behavior was corrected instantly and in a way that was not quickly forgotten.

Mom’s early life was hard. When she was six, her father was killed in a farming accident. When she was sixteen, her mother broke her hip, and Mom had to drop out of school to care for her and her younger siblings. When my father met my mother at a dance when she was eighteen, he was instantly smitten. A few months later they were married.

After more than sixty years of married life, my father died of colon cancer in 1995. As I watched Mom as the months and years moved on, I came to understand in ways I had not understood before what it meant to grieve for a person. She went on with life as a widow for the next nine years, but never quite got over the loss of Dad. She lived close to us and my siblings for a time, then moved in with our family for three years before we were called to go to England.

One day while we were having breakfast together, we were talking about Dad, and I said something about how protective and caring he had always been toward her. Her eyes immediately misted up as she nodded. Then she told us that in the latter part of their life the tenderness had only increased.

“He was always so tender with me in those last years,” she said. “For example, every night when we went to bed, we would lay there and talk for awhile. Finally, as we prepared to go to sleep, he would reach across to me and lay his hand on my cheek.” By now the tears were flowing. “Then he would say, ‘I love you, Evelyn.’”

By that time, both my wife and I were a little teary-eyed too. But she wasn’t through. “I have something I want to share with you about your father that I’ve never shared before. This happened about a year after he died.” She then reminded us of how she did not like the dark. I had to smile. That was an understatement. Mom hated being alone in the dark.

She continued with her story:

One night, I had gone to bed. The house was pitch-black and as I lay there all alone, the old feelings of fear and anxiety began to rise. I started thinking about your dad and how much I missed him. I missed him comforting me when I became frightened of the dark. As I was thinking about that, suddenly my heart began to pound. It was racing so fast and so hard that I was gasping for breath. I was terribly frightened. I was sure I was having a heart attack. What was even worse was the thought that I would die there alone in the dark and it might be days before anyone even knew.

She had to stop then, she was crying so hard. For all of her gentle spirit, my mother was not one to show her emotions either. Finally, regaining enough composure to go on, she said:

I was so terrified that I involuntarily cried out in my mind, “Heavenly Father, please don’t let me die here alone.”

For a moment, nothing happened. Then suddenly, I felt a hand rest against my cheek. And I heard your father say, “I love you, Evelyn.” That was all. But instantly, I was at peace. My heart slowed; my fear disappeared. A few minutes later, I fell into a deep sleep and slept through the rest of the night.

Mom passed away in August 2004. Even now, years after she told us that story, I cannot think of it without getting emotional all over again. Talk about tender mercies! And not just for her. My wife and I were also greatly blessed that morning. I silently thanked my Heavenly Father for allowing Dad that brief penetration of the veil. It enriched Mom’s remaining life, and it certainly enriched ours.

As Latter-day Saints, we know God exists, but sometimes we may wonder, “Heavenly Father, are you really there for me?” In this unique book, Gerald N. Lund shows how having a correct idea of God's character, perfections, and attributes is essential to our ability to strengthen our faith and develop our testimony. Available now at DeseretBook.com.