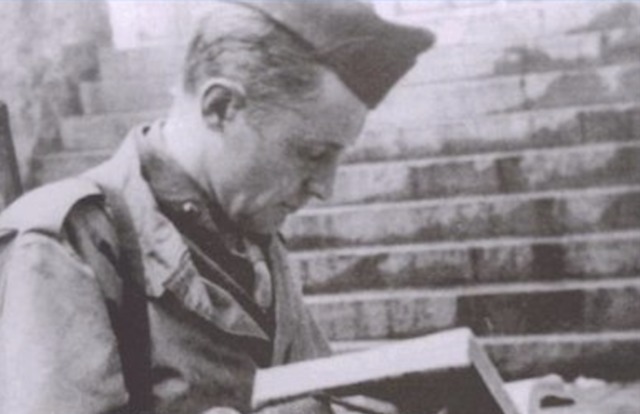 Sergeant Hugh Nibley was among the first to land on Utah Beach in Normandy, France, on June 6, 1944, exactly 75 years ago today. “My fate seems always to have been first in line. Our ship headed the convoy, and as if that were not enough, our party was to be the first ashore when contact was made with the division,” Nibley remembers of that day. In Meridian Magazine, Maurine Proctor recently compiled Sergeant Nibley's memories of D-Day in "Sergeant Hugh Nibley’s Surprising Memories of D-Day."

Nibley was assigned to take General Pratt's jeep from the beach to a nearby farm, where he was meet up with the 101st Airborne Division. About crossing the channel, Nibley recounted, "On the night before we went ashore in Normandy, I spent the whole night up on the deck watching the fireworks, and the destructive power I saw was just unbelievable. They say the Normandy invasion was the biggest military operation ever undertaken, and you could see it. . . . The whole thing was extremely visible from where I was. The ships were all lined up at anchor waiting for the time to go, and I sat up on deck all night watched as the Germans tried hard to get our ship. Planes bombed us all night. They kept flying over again and again, but they didn’t hit the ship. . . . It seemed like the bombs would come within inches of the ship with great plumes of water that would shoot up over us and thoroughly wash the decks and shower us and fill the air with an overpowering sickening smell of cordite."

In addition to his memories of that bloody day, Nibley also recounted many dreams he had of D-Day and the days following. “When I was very sick in Claremont I had impressions of the war, those ‘five-o’clock’ dreams. In one I dreamed vividly of a ship going down with black smoke pouring from it. I saw it as plain as anything. And then I saw it again right next to us off the beach there in Normandy." Amidst the chaos of the beach landing, Nibley had one profound impression that, strangely enough, helped him understand why elephants would be mentioned in the Book of Mormon.

Nibley's dreams and impressions continued after June 6, 1944. He remembered, “I had my other dreams too, my five o’clock impressions. There was the one about the ship, and then I had one where I was in a foxhole and two tanks started coming across the field. That’s where the dream stopped. I never knew how it turned out. Then near Carentan, I found myself in a foxhole looking out at a field and the scene looked very familiar. I remembered the dream of the two tanks coming, and I realized I was looking at the same field I had seen in my dream. There was a reporter from The Stars and Stripes in the next foxhole, and I called over to him and said, ‘Well, this is the end of it. In a minute you’re going to see two tanks come across that field, and that’s going to decide it for us.'” Sure enough, here came the two tanks. I had dreamed about them right up to that minute, but I didn’t know what was going to happen next."

To read more about Nibley's experiences and impressions, read the full article here.