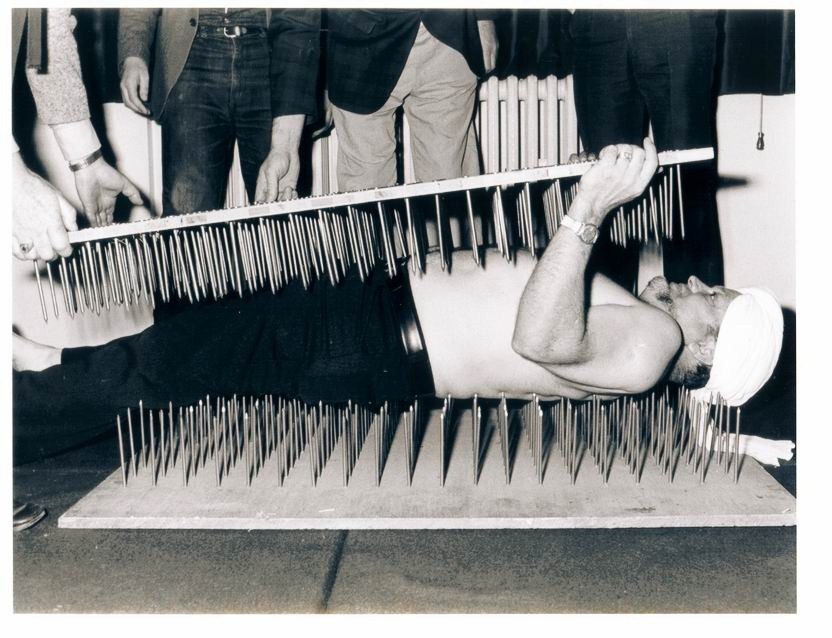 From the world’s fastest texter (Benjamin Cook, 2006) to the world’s fastest raw onion eater (Trevor Reilly, 2004); from the world’s strongest power-lifter (Lance Davis, 2004, 618.3 pounds) to the world’s fastest balloon animal inflator  (KC Williams, 2003 & 2004), there is no doubt that the Church is full of impressive Mormons dedicated to developing the unique talents the Lord has given them.  And the diversity of these talents has only added to the strength and notability of our Church and its members, proving that Mormons can be daring, whimsical, athletic, knowledgeable, and faithful.

Prior cheese maker, horticulturist, and Indian-culture enthusiast Vernon Craig suffered puncture wounds and several second- and third-degree burns setting these world records. On May 6, 1977, Craig sandwiched himself between two boards containing 506 nails and then encouraged people to climb onto the top board until it reached the weight of 1,642.5 pounds. Later that same June, Craig walked across 25 feet of scorching coals that measured 1,494 degrees Fahrenheit. These impressive feats made Craig one of the first six inductees ushered into the Guinness World Records Hall of Fame. Speaking about the mental and physical strain of achieving these records, Craig said, “It’s your mind taking complete control of your entire body, and ordering it through the heat . . . Your mind is a powerful tool that can even ward off pain, if you ask it to” (The Skousen Book of More Amazing Mormon World Records, Paul Skousen, 2008).

1950 Deepest Deep-Sea Dive for a Woman

From fixing a broken pipe spewing sewage into the ocean to kicking a 12- to 15-foot shark in the teeth, Norma Hanson was a woman well acquainted with the dangers of deep-sea diving. But on May 14, 1950, Norma set a new world record with a 220-foot, 10-minute dive that tested even her courage. During this dive and the following 160-minute ascent, Norma was able to stay in constant communication with her husband and frequent diving partner, Alfred, through a wired telephone system he invented.

Plummeting from 60,000 feet in a 25-story tall tangle of cables, metal, and rubberized fabric was not an intentional world record, but it was one BYU graduate Orvil Anderson set in his attempts to pilot the Explorer I higher than any air balloon had gone before. At the dizzying altitude of 60,613 feet, the seams along Anderson’s high-altitude balloon began ripping, causing the balloon to drop from the sky. With a parachute that had already ripped open, Orville had no other option than to jump from the balloon at 5,000 feet with his faulty parachute bundled up in his hands. Despite watching his balloon splatter to pieces on the pavement, Anderson was up in the air the next year, piloting the Explorer II in its record-breaking flight and reaching 72,395 feet.

Single sisters at weddings beware! At just over 5-feet tall, Jamie Jackson blew away the past world record of 11 wedding bouquets caught with her astounding number of 50. Brimming with gumption, Jackson’s athleticism and competitive spirit have helped her snag bouquets from the hands of girls over a foot taller than her. But one has to wonder, who will catch the bouquet at her wedding?

1997 Most Ice Cracked With Hand or Head

Brian Spencer not only set a new record when he jumped six feet in the air over a bar on a pogo stick, he invented a new sport—extreme pogo sticking. Since that time, LDS men have dominated this burgeoning international sport. Dan Mahoney, an LDS athlete from Nova Scotia, set the bar high with several record-breaking jumps, finally topping out at 9-feet 6-inches. Recently, an LDS Idahoan,  Biff Hutchison, reached 9-feet 7 1/2-inches, setting another world record. Biff also holds a World Record for fewest bounces, and consequently the most airtime, of any rider in a minute. Check out Biff's world record-breaking high jump.

Captain of the 1944 University of Utah NCAA championship-winning basketball team, Fred Sheffield, was an all-around athlete—the first athlete, in fact, to place four years in a row for the NCAA high jump championships.  In 1943, his jump broke world records, reaching the height of 6-feet 8-inches.

For young Australian Korbyn Horomona, water is her element. Within just a year of beginning swim lessons, Horomona freestyled and backstroked her way into the record books by swimming 90 minutes and 1.5 kilometers nonstop. Oh yeah, and did I mention she was only 3 years old?

Yet another athletic, no-nonsense female, Jessi Rivera received her black belt in karate at only 7 years old. Beginning the sport when she was only 3, Rivera showed remarkable dedication not only to fighting but to her faith as well. On the morning of her black belt grading, Rivera responded to her mother’s question if she was worried about anything with a definite yes, adding, “I am worried that I won’t be able to memorize all the articles of faith by my baptism” (The Skousen Book of More Amazing Mormon World Records, Paul Skousen, 2008).

Roller coaster engineer Stan Checketts has worked in over 27 countries building and designing over 330 amusement rides. It’s no wonder some of his rides are satisfying even the boldest thrill seekers as they rise and zoom to world record heights. In 1996, Checketts’ ride atop Las Vegas’ Stratosphere Tower, the Big Shot, broke world records by rocketing passengers at 45 miles per hour to the height of 1,081 feet. In 2002, Checketts’ roller coaster at Fujikyu Highlands in Japan, the Dodompa, raced into the Guinness Book by accelerating its passengers from 0 to 100 miles per hour in just two seconds and reaching the speed of 107 miles per hour. Hold onto your hat—that one might be a wild ride.

At the nimble age of 91, Max Woodbury finally retired from his calling as branch president in 1968 after 51 years of service. Woodbury was called as the president of a branch for the deaf in Ogden, Utah, when it was first organized in 1917.

► You'll also like: The Oldest Prophet, Oldest Mormonad + 12 Other Fascinating and Historic Parts of the Church

As of 2007, a sister from Brazil, Amelia Costa dos Santos, was the oldest church member living. Born in 1888, she was then 119 years old and has 15 children, 96 grandchildren, and well over 100 great-grandchildren.