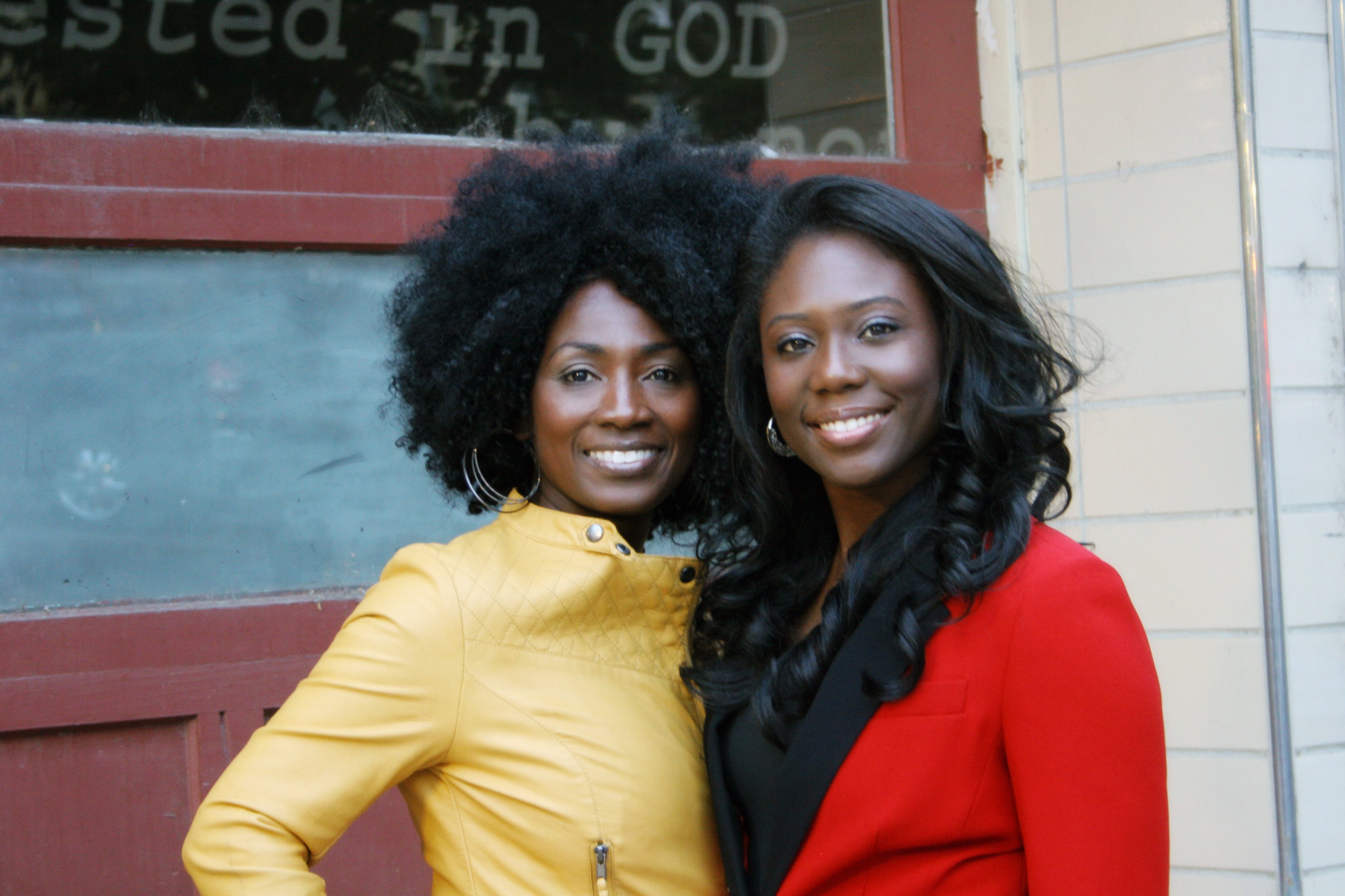 "People expect Latter-day Saints to be a lot of things: white, rich, serious. They picture who they’ve seen in the media like Mitt Romney,” says  Zandra Vranes, although then she adds, “But I’m black, broke, and funny, and I’m a Latter-day Saint too.” She and her longtime friend Tamu Smith are known as the Sistas in Zion: two soul sisters whose faith and humor unites them. Their shared mission? To provide “a relief  from sobriety where hilarity never faileth.”

Despite their name, the “Sistas in Zion” are actually, in their words, “sistas from different mistas.” They found one another in the Utah-based Genesis group, which Vranes describes as “a hybrid black Latter-day Saint community.” It’s an official organization created by the First Presidency to serve the unique needs of Latter-day Saint minorities. “It has all the elements of any LDS church service,” she explains further, “with the added culture of black communities. You can bear your testimony just like in any other Latter-day Saint congregation, but at Genesis, you’ll get an ‘amen’ or ‘hallelujah’ from the pew. We sing hymns, some of them just aren’t in the green book. And you can clap and sway to the music, and no one looks at you funny.”

Smith, a cosmetologist and mother of six, and Vranes, a paralegal and wife, grew close in this environment until Vranes had to move to a different state because of her husband’s job. It was then that Smith suggested they find a way to stay in touch by co-writing a blog. Not wanting to write about “anything personal,” they decided the topic should be their shared religion.

“We love to laugh, and we knew immediately we wanted our blog to be a place filled with humor,” the Sistas explain. But more than anything, Smith exclaims, “I love having a partner in crime!”

The lighthearted humor and hilarity the Sistas share wasn’t born overnight—it’s a lifetime of experience that has given these sassy Sistas their unique outlook on life. “I attribute my sense of humor mostly to my grandparents, who raised me, as well as the people and environment that I was raised in,” explains Smith, who grew up in Southern California. “My grandmother used to say, ‘Sometimes, we gotta laugh to keep from crying.’”

It’s a sentiment Vranes echoes almost word for word: “My life experience and my family are where I get my sense of humor.”

She was raised in Georgia before moving to Utah in her teenage years. “I find that people who don’t have a lot, laugh a lot. The other alternative is crying.” And, she jokingly adds, “If we waste all the Kleenex crying about what we don’t have, there won’t be any left when we really need it during fast and testimony meeting. How much tissue do you think Latter-day Saints all over the world use on the first Sunday of every month? If I were smarter, I would have bought stock in Kleenex and Jell-O a long time ago.”

Indeed, for the Sistas, laughs abound, and it’s not by accident. “I think that the ability to laugh in spite of adversity is a gift,” Smith explains, “and we are taught to share our gifts.” She compares the talent for humor she and Vranes share to a candle that can’t be hidden under a bushel. “Laughter (in some cases) is light and can turn a burdensome situation into something light and manageable.”

The move offered her a chance to become an example of a strong, black, Latter-day Saint woman, but it also came with challenges. “As a teenager, I wasn’t prepared to have to be an unpaid diversity spokeswoman,” Vranes shares.

To help others understand this sort of treatment, which some minorities like African Americans encounter on a regular basis, Smith explains how most Latter-day Saints can relate: “When something happens in the Latter-day Saint community, whether it’s good or bad, if people know you are a Latter-day Saint, they want to discuss it with you.” In that way, every Latter-day Saint becomes “an unpaid spokesperson” for Latter-day Saints everywhere—except Vranes and Smith do it for both their religion and their race.

But such experiences, common as they are and as frustrating as they can be, have helped the Sistas grow in confidence and wisdom. “Being in the minority is sometimes hard, but it has taught me to cherish the relationships that I have with faithful black Latter-day Saint women.”

Smith also shares her own experience trying to fit into the typical Latter-day Saint mold. “As a youth, whenever we did makeovers, I was the kid that went to mutual looking good but came home looking like ‘who did it, what for, and please don’t do it again!’” Things are different for her today as she has come to find her place in the LDS community. “The thing I do love about being a black woman in the LDS Church is not feeling like I have to fit into ‘the box.’ I do believe that people put a lot of pressure on themselves and others to fit in, whether it’s the color of their hair or their clothing preference. In the area of the world that I live in [Provo, Utah], I’m never going to be viewed as being the same.” But instead of allowing that realization to cripple her, Smith accepted that truth and let it liberate her. “Knowing that certain stipulations aren’t expected of me is very freeing.”

She also explains, “I personally don’t mind it when people notice my color as long as they notice that as a daughter of God I have individual value as well.” Being appreciated as a person of divine heritage and a child of God goes beyond ethnicity, she notes. “Generally when our hearts are touched, we talk about how our hearts were touched, not what color the individual was who touched our hearts.”

The Sistas hope that through their work they can touch the hearts of Latter-day Saints everywhere and show them how to break LDS stereotypes of all kinds. Trying to define a person by their religion, such as “Latter-day Saint,” leads to misunderstandings and limiting expectations. “Being a Latter-day Saint isn’t who or what we are,” Smith says. “Mormon is a book that we read.” The values and standards set by the teachings in the Book of Mormon and Bible make up an important portion of faithful followers’ lives, but diversity in the Church comes when members embrace who they are and how they personally can be disciples of Christ.

“Despite what people think, there isn’t one look to the Church, and I don’t just mean ethnicity,” Vranes shares. “Not every white Latter-day Saint is the same, and not every Hispanic Latter-day Saint is the same. As Christians, we all have the same goal: to follow Christ. But we are all unique in how we do that. That uniqueness is important because the gospel of Jesus Christ is for everyone; it is all-inclusive.”

This is exactly the message that the Sistas in Zion hope to share. Their website, blog, and podcast all aim to spread the good news of the gospel in a way that is both entertaining and accessible for Latter-day Saints everywhere. “I enjoy sharing, breaking down, and modernizing scriptural stories and then showing ways in which they can relate to our lives today,” Smith says. Vranes gives just one example: “Let me tell you a story about a couple. The girl’s family didn’t like the guy, and it eventually broke them up. So one of them becomes a little destructive and jumps into a rebound relationship. There are a million signs that the new relationship is not going to work out, but they keep ignoring the warnings. Who am I talking about? Kim Kardashian and Kris Humphries? Nope. Samson and Delilah in the Bible!”

To the Sistas, this sort of modern application is an absolutely necessary part of understanding the scriptures and applying them in our lives. “You don’t open the Bible and see a list of things to do and a list of things not to do,” they explain. “The scriptures give us real-life examples. They tell a person’s story, and we find the lessons by reading about their life.”

And it’s sharing the stories they love and the lessons they’ve learned that has turned the message of the Sistas in Zion into something truly remarkable.

The Sistas’ unique narrative ability and particular brand of humor keeps them both in sync even if today they’re still separated by states. Part of their message on personal diversity exemplifies their relationship beautifully: “We don’t always agree with one another, but we always love one another.”

Whatever their approach, what the Sistas do works, and the future is as bright as their faith—and their shared laughter. As

Smith says, “It’s time for us to tell our stories to the world! And like they say where we come from: Don’t get it twisted, we are ’bout to take part in the Christian conversation!”

Tamu Smith and Zandra Vranes—the Sistas in Zion—aren’t mad, but they are mad funny. In their book, Smith and Vranes share personal experiences and pop culture lessons about standing up for what you believe, embracing diversity, celebrating sisterhood, and being yourself.

“We all have a story to tell. We all have something to share and offer,” Vranes says. “And it may surprise you who can relate to your experiences and who appreciates your offering. They don’t always look like you or come from where you come from. Don’t hide under a bushel; there are always people who care about what you have to share.”

On top of all that, the Sistas also talk about what it means to be Christian. Smith says. “Through our book and stories of who we are and how God has touched our lives, we are not only making room for ourselves but for other believers as well.”