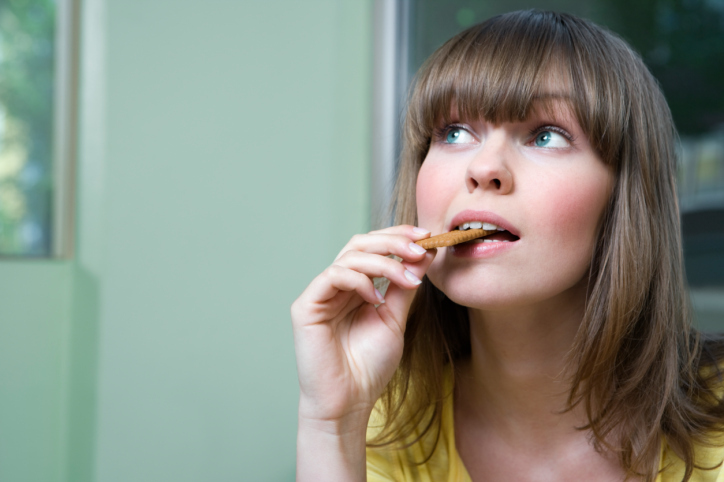 Is Food the Mormon Vice?

My name’s Jenny. I’m a Mormon. And I’m a chocoholic.

Let me tell you a story. From ages 11 to 22, I could have been classified as overweight. To be fair, I’m rather tall, so a lot of people never thought of me that way, but it was still true. And I can tell you right now why I was overweight: I love food! It’s still a love that I can’t resist. Basically I know that I will always have at least two things in my life: the gospel and a sweet-tooth.

But lately I’ve been pondering about my love of food—and I realized I’m not the only person out there who struggles with this. For some people, food is no big deal. For others (like me), it’s the biggest trial of their life. We Mormons are no different. We’re commanded to live the Word of Wisdom, and the commandment is pretty black and white about some things. No alcohol. No coffee. No tobacco. No tea. But it’s not completely black and white on everything. For example, there’s no specific part of the 89th section of the Doctrine and Covenants that tells me I can’t eat an entire pan of brownies. So is it ok if I do? (I confess nothing…)

If we have such good direction from the Lord on what we should put into our bodies, why does food often seem to be the vice for many of us Mormons? (Myself included.) It’s a question I really am curious about. Of course I don’t have the perfect answer, but I have a few theories:

First off, in our Mormon culture, food often comes with quality time with friends and family. It means laughter and children and family and happiness. Do you think people would stay late after a fireside if there weren’t donuts or hot cider or cookies? Maybe, but probably not. But because members do stay late to enjoy the refreshments, friendships are made, investigators are welcomed, and relationships are deepened.

Secondly, our pioneer ancestors set the example of bringing food and comfort to the sick and needy back when that really counted as a sacrifice. Because let’s face it, in those days, giving up some of your food to feed someone else could make all the difference in the world—to you and to them. It’s a loving tradition that our members still seem to uphold today. When a family in the ward is in need, other members chip in to make meals for them. When a loved one dies, we pitch in to bring food to the grieving family (hence, the Mormon tradition of delicious funeral potatoes).

These are all good uses for food, and it shows that food can really bring people together and build unity. But it shouldn’t become a substitute vice for all the other vices we’ve been counseled to avoid. Many people think that because Mormons don’t drink, smoke, or do drugs, food somewhat takes the place of those other “rewarding” things. So do we Mormons reward ourselves with food more than other people? Who knows. (I know I’m guilty of rewarding myself with food.)  Maybe the key lies in that much-debated phrase, “All things in moderation.”

So is food really the Mormon vice? Tell us what you think in the comments.