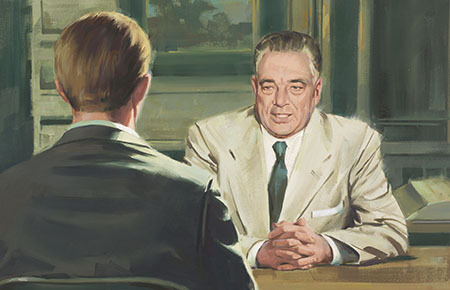 I served in the United States Navy toward the end of World War II. I was a seaman, the lowest possible rank in the navy. Then I qualified to be Seaman First Class, after which I qualified to be Yeoman Third Class.

World War II ended, and I was later discharged. But I made a decision that if ever I went back into the military, I wanted to serve as a commissioned officer. I thought, “No more mess kitchens for me, no more scrubbing the decks, if I can avoid it.”

After I was discharged, I joined the United States Naval Reserve. I went to drill every Monday night. I studied hard that I might qualify academically. I took every kind of examination imaginable: mental, physical, and emotional. Finally, there came the beautiful news: “You have been accepted to receive the commission of an ensign in the United States Naval Reserve.”

I gleefully showed it to my wife, Frances, and said, “I made it! I made it!” She hugged me and said, “You’ve worked hard enough to achieve it.”

But then something happened. I was called to be a counselor in my ward bishopric. The bishop’s council meeting was on the same evening as my navy drill meeting. I knew there was a terrible conflict. I knew that I didn’t have the time to pursue the Naval Reserve and my bishopric duties. What was I to do? A decision had to be made.

I prayed about it. Then I went to see the man who was my stake president when I was a boy, Elder Harold B. Lee (1899–1973), then of the Quorum of the Twelve Apostles. I sat down across the table from him. I told him how much I valued that commission. In fact, I showed him the copy of the letter of appointment I had received.

After pondering the matter for a moment, he said to me, “Here’s what you should do, Brother Monson. You write a letter to the Bureau of Naval Affairs and tell them that because of your call as a member of the bishopric, you can’t accept that commission in the United States Naval Reserve.”

My heart sank. He added, “Then write to the commandant of the Twelfth Naval District in San Francisco indicating that you would like to be discharged from the reserve.”

I said, “Elder Lee, you don’t understand the military. Of course they will decline to give me that commission if I refuse to accept it, but the Twelfth Naval District isn’t going to let me off. With a war brewing in Korea, a noncommissioned officer will surely be called up. If called back, I would rather go back as a commissioned officer, but I won’t if I don’t accept this commission. Are you sure this is the counsel you want me to receive?”

Elder Lee put his hand on my shoulder and in a fatherly way said, “Brother Monson, have more faith. The military is not for you.”