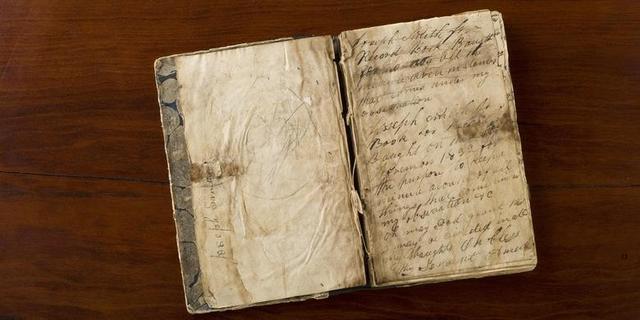 MR says: Have you ever wondered what events Joseph Smith recorded in his personal journals while he was the prophet? And did you know that most of these events weren't written by Joseph, but by scribes that wrote down what he dictated to them.

Joseph Smith began keeping a personal record a month before he turned 27. His first journal, a small volume that documents November of 1832 through December of 1834 in a little over a hundred pages, is one of the priceless treasures preserved in the Church History Library in Salt Lake City. While Joseph kept this journal only sporadically, turning much of the responsibility of record-keeping over to scribes, the little book opens a window into the prophet’s personality and is an important record of Church activities.

Joseph purchased that first journal, measuring roughly 4 inches wide by 6 inches high, on November 27, 1832. Whereas a larger book would have lent itself to the creation of formal records, perhaps kept at a desk, the book Joseph bought that day could be carried in a pocket. Indeed, the journal accompanied Joseph on two missions that are described in its pages, and it was likely brought on other journeys. Three leather loops on the outside meant the journal could be fastened shut by closing the covers and inserting a pencil through the loops. The front and back covers were decorated with paper dyed in a marble pattern. The colors have faded over time, but in Joseph’s day the vibrant blue in the pattern would have stood out.

The immediate impetus for beginning the journal may have been a revelation Joseph recorded the day he bought the book. The revelation, documented in a November 27 letter from the prophet to William W. Phelps, explained that the “duty of the Lord’s clerk”—John Whitmer was the official Church historian at the time—was to keep “a history, and a general church record of all things that transpire in Zion.” “Zion” referred to Missouri, where Phelps and Whitmer were living. Perhaps the revelation also prompted Joseph to begin a personal record.

This book is the first of seven journals kept by or for Joseph. The other six journals vary in size and length, as well as in the types of information recorded in them. The six additional books cover September 1835 to April 1836; March to September 1838; September and October 1838; April to October 1839; December 1841 to December 1842; and December 1842 to June 1844.

During the time recorded in his first journal, Joseph and his family lived in a small community in Kirtland, Ohio. At the time, the Church was growing rapidly but was still rather small, with a few hundred members around Kirtland and several hundred more in Missouri—some 900 miles away—where they were endeavoring to build a literal Zion.

Joseph called his first journal a “Book for Record” and wrote that his purpose was “to keep a minute account of all things that come under my observation.” He faithfully wrote in the book for nine consecutive days, through December 6, 1832, after which ten months passed before another entry was composed. Those first nine entries are brief, recording the prophet’s thoughts and a few of his activities, such as preaching and holding meetings. During the period when the journal is silent, Joseph Smith dictated several revelations, continued his translation of the Bible, established and met with the School of the Prophets, and developed plans for a Mormon settlement in Missouri.

Journal-keeping resumed in October 1833 as Joseph prepared to leave on a short proselytizing mission to Canada to preach to the family of Church member Freeman Nickerson. . . .

Images from the Church History Library.

Learn more about the life of the Prophet Joseph through the Joseph Smith Papers project, an incredible project that gives readers access to details, records, and manuscripts surrounding Joseph Smith's life that have never been published before. You can check out volume one, volume two, and volume threeof this series at deseretbook.com.

Read the rest of this story at history.lds.org