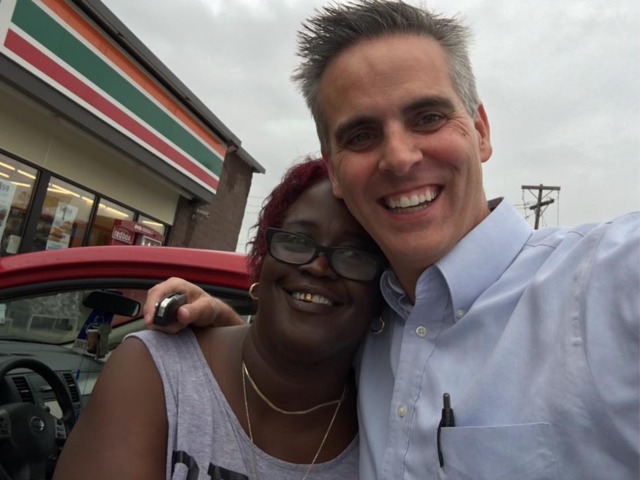 LDS Author Reunited With Stanger He Helped at a Gas Station. Her Reaction Will Make Your Day

LDS author Jason F. Wright was stopped at a 7-Eleven after running some errands in Strasburg, Virginia, when Anita Hughes walked into the store and shouted, "Does anyone know how to get to Ohio?!"

That one question started a story that captured the attention of people from all over the country.

Wright, who was impressed by Hughes' spunk, offered to help her. As they talked, Wright found out Hughes was from the Cleveland area and was on a solo road trip to see a gospel singer when she became lost. Within a short time, the two became friends and they even took a selfie together before Wright sent Hughes off in the right direction.

Though Wright admitted on his Facebook post that he did not get her name, he wrote, "The Woman from Cleveland couldn't have looked, talked or acted more differently, but we had the important things in common—love of God and of one another."

After running a story about the chance encounter and the friendship that sprung up from it, ABC 5 was able to track down Hughes and finally reunite the two friends via Skype.

While talking to each other on Skype, the two even talked about plans of meeting each other again in person, though Wright would be the one driving this time.