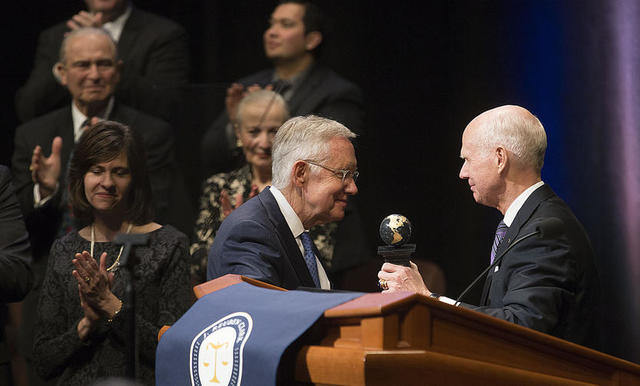 After serving five terms as a U.S. senator, which included eight years as the Democratic minority leader, Harry Reid received recognition for his work from his fellow Mormons.

During his political career, Reid told The Salt Lake Tribune he always kept a copy of the Book of Mormon in his Senate office and even offered one to Republican Senator Larry Pressler.

"In my personal experience, Sen. Reid has extended himself and been willing to help and roll up his sleeves and get us introduced to the right people and speak well for us," past chairman of the Church's public affairs advisory committee in Washington, D.C. Ralph Hardy Jr. told the Deseret News.

One of the most powerful elected officials in the country the past eight years received recognition Friday from a Mormon lawyers' group for his decades of service in government and for the LDS Church.

In honoring Reid, Elder Lance B. Wickman, general counsel for the LDS Church and an emeritus General Authority Seventy, said the Democratic senator could never be called a shrinking violet.