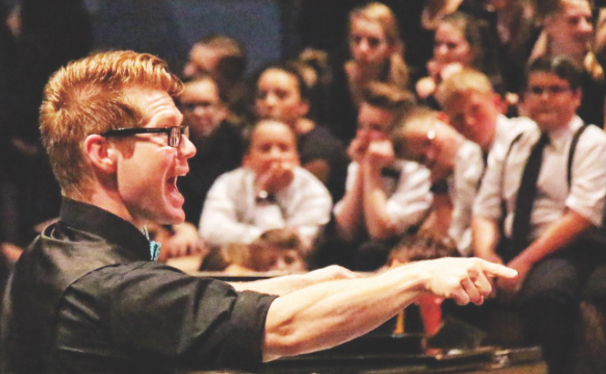 2 LDS Teachers Nominated for Prestigious Award Given at the Grammys

Keith Goodrich is not a typical middle school choir and orchestra teacher.

It's not his brightly colored bowties or clear enthusiasm for teaching more than 100 students in his largest class that makes him different, it's the fact that he was nominated for the 2017 Music Educator Award presented by The Recording Academy and the Grammy Foundation.

Earlier this summer, Goodrich, who teaches at Elk Ridge Middle School in South Jordan, Utah, was announced as a quarterfinalist for the award.

But he is not the only exceptional educator from Utah to selected for the prestigious award.

Caleb Chapman, Artistic Director for the Pioneer High School for the Performing Arts, was also nominated for the 2016 award.

But both of these teacher's nominations are no surprise when it comes to the impact they've made on their students.

While still in college, Chapman began the Crescent School of Music for young musicians which now comprises of more than 250 musicians ages 7-18 and includes 11 elite ensembles including the Crescent Super Band, according to his website.

"First, we don't put limitations on them. We ask them to do what most think is impossible," Chapman said in an interview with the Deseret News. "They meet and exceed their expectations technically, musically, and emotionally.

Through his efforts, Chapman has helped thousands of his students graduate from high school and go on to receive college scholarships for their musical abilities.

While some may think gym class would be one of the most popular classes in middle school, Goodrich's largest choir class of 130 students might prove that theory wrong.

His devotion to his students and how he pushes them to excel is what makes him an exceptional teacher.

“I don’t allow kids to say ‘I can’t,’ but ‘here is what I can do.’ I help encourage them to grow, and it’s not what I see, but they realize by trying harder music or auditioning for a piece, it’s that they can see and know how they’ve grown,” he said in an interview with the South Jordan Journal.

But the impact these teachers have on their students will continue to lead them to success.