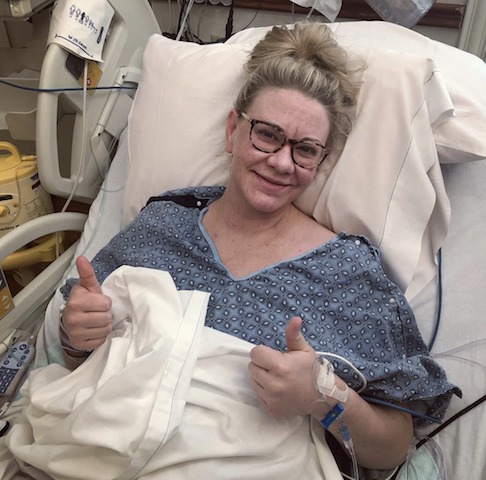 Thanks to Good 4 Utah for making us aware of this story.

Moving to from St. George, Utah, to Phoenix, Arizona. Seven weeks of hospital bedrest. Physical therapy. Nearly going into premature labor—the past weeks have not been easy for Jamie Scott as she navigated the challenges of her quintuplet pregnancy.

Fortunately, the LDS mom and her husband, Skyler Scott, welcomed five new members into their family—Lily, Logan, Lincoln, Violet, and Daisy—yesterday morning just after the 29-week mark of Jamie's pregnancy. A pregnancy that almost never happened.

To begin with, the chances of a woman becoming pregnant with quintuplets are pretty slim—one in 55 million, according to baby2see.com. And after struggling for years with infertility, the LDS couple wasn't sure they would be able to welcome more children into their family of four.

“It was really challenging to watch your wife go through that,” Scott told PEOPLE. “Seeing something that means so much to Jamie and not having success with it and not seeing the results of all our praying, that was really, really hard to go through.”

But, with the help of fertility treatments, Jamie told Inside Edition she was thrilled to find out she was pregnant. However, she had no idea until the first ultrasound that she was pregnant with not one, not two, not three, but five babies.

I just cried," Jamie told South West News Service. "I was in awe. We had tried for quite some time so it was amazing that I even was pregnant."

However, challenges arose during the pregnancy. At nearly 22 weeks, baby Logan's water broke and Jamie began having contractions. With the gestation period lasting about 27 weeks for most quintuplet pregnancies, this would mean Logan would arrive more than a month ahead of average and almost three months ahead of the date set for Jamie's C-section, which would also cause problems for his four siblings.

Dear friends and family - We love you, and we appreciate your love and the many prayers offered on our behalf. At 7am the water broke on the sac of Baby A, our sweet little boy who is closest to the cervix. A recent ultrasound revealed that all 5 babies are active with strong little heartbeats; however, Baby A, who we’ve affectedly named Logan Mathew Scott, has half as much fluid as our other babies. With high order multiples, a complication for one is generally a complication for all. We know everything is in Heavenly Fathers hands, and we both feel at peace. We’ll update everyone when we can. Meanwhile, we’re enjoying every moment we have with our babies, and praying for continued miracles. Your prayers, as always, are sincerely appreciated. All our love, Skyler and Jamie ❤️

Fortunately, Jamie's contractions stopped. An ultrasound revealed that Logan and his sibling's heartbeats were normal—a good sign. Later, fluid tests revealed that Logan was back to normal, which was a miracle considering how close he was to being delivered prematurely.

However, through these challenges, the couple stayed positive and posted about the miracles they had witnessed throughout Jamie's pregnancy.

"She [Jamie] was so positive, courageous, and graceful as we headed off on this journey," Scott posted on Instagram. "Now, after leaving her home and family in another state, having been in multiple situations where she was told we might lose this pregnancy, and enduring 7 weeks of hospitalized bed rest, she remains as graceful and as courageous as ever. . . . Today, she has never looked more beautiful to me. I wish all of you could witness firsthand the miraculous faith and courage I see day in and day out in this powerful woman. Of all the miracles I’ve seen in my life, including what seems to be a continuous stream of miracles flowing into our lives since the quints were conceived, Jamie is the greatest of them all. She herself is a miracle to behold, and I will adore her forever."

I love hearing this girl laugh! Happy 27 weeks to the strongest person I know 🎉 I love you Jamie Lynn! Join us at 7:30pm (MST) as we remove another link from the ScQuints paper chain. 5 weeks to 32 💙🌸🌸🌸💙 #scquints #27weeks

During this time, family and friends rallied around the Scotts. Family members set up a Go Fund Me page for the couple after staggering medical costs drained their financial resources. A soccer tournament, The ScQuints 5v5, held at the couple's home of St. George also raised money for the couple as they waded through financial challenges of a quintuplet pregnancy.

"After all the funds were collected for tournament fees, sponsorships, and an epic bake sale (thanks for those who donated: Daylight donuts, Dutchman’s, Einstein’s Bagel, Fiiz, Hungry Howie’s, and The Sugar Cookie), the tournament raised just over $16,000 for our quints: Logan, Lily, Violet, Daisy, and Lincoln. Thank you!!" the Scotts shared on Facebook.

Then, just as Jamie reached the 29-week mark of her pregnancy, she went into labor and doctors delivered her babies via C-section.

"We have 5 beautiful children in the NICU. All 5 babies were born this morning between 1:27 a.m. and 1:28 a.m," the Scotts posted on Facebook. "They weigh between 2 lbs and 2lbs 9 oz. Jamie and all our cinco babies are doing well. We’ll share more details and photos when we can. Thank you for your love, support, faith, and prayers."

As of Skyler's latest post on Instagram yesterday, the babies and Jamie are doing well as they celebrate the birthday of five new family members and the miraculous journey that brought them to the Scott family.