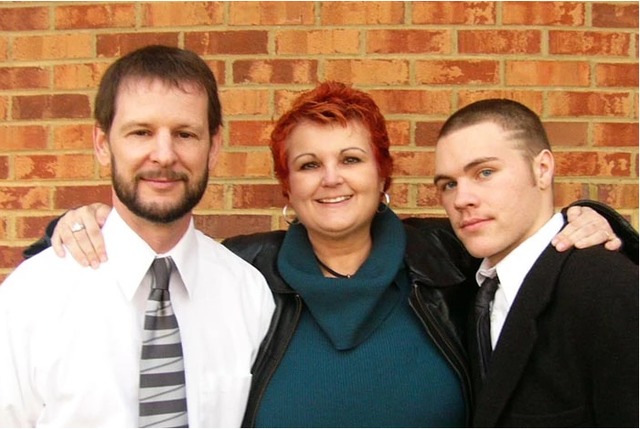 When Tanja and Kevin Crouch learned that they would not be able to have children, their whole life plan turned upside down. At the time, Tanja worked as a recording studio manager and Kevin--who previously worked as a costume designer for Disney and Vogue--worked as a college professor of fashion. The LDS couple lived in Tenessee and always assumed biological children were in their future.

But when the heartbreaking news came that they couldn't have kids, the Crouches simply moved ahead with faith and hope, creating a new future vision of their family.

That vision still included children, and in 2007 the Crouches were ready to adopt.

“The first time we met Cory, I knew he was our son. I just felt it," Tanja Crouch told Upworthy.com. "I believe Cory is the son we were supposed to have. I believe that God found a way to finally help us to find one another."

Despite having a confirmation that this was the right decision, the Crouches knew the road ahead wouldn't be easy for their new family. At the time of his adoption, Cory was just a week shy of his 16th birthday. Having been taken from his home and placed in foster care at age 5, Cory moved from home to home, and finally to a facility before meeting the Crouches.

Life with the Crouches gave Cory the stability, love, and support he never had in his previous homes. Through Tanja and Kevin's example, Cory was exposed to the gospel and baptized within the year.

"It was his choice; the missionaries told me he had accepted their challenge and set a date before I ever heard from him that he had made the decision," Tanja writes on her blog. "We did not want him to feel pressure from us; we needed it to be his decision. I know Cory had a testimony at the time he joined the Church, but he was still growing and learning, as we all are."

And with that growing came some mistakes and some poor choices. Cory ran into trouble with the police when he got caught with marijuana, and, when he didn't show up for his court date, he was sentenced to time in prison.

But despite his struggles, the Crouches continued to love and support their son.

Then, one day while Tanja was listening to general conference, a quote from Tad Callister penetrated straight to her heart:

“As parents, we are to be the prime gospel teachers and examples for our children—not the bishop, the Sunday School, the Young Women or Young Men, but the parents. As their prime gospel teachers, we can teach them the power and reality of the Atonement—of their identity and divine destiny—and in so doing give them a rock foundation upon which to build. When all is said and done, the home is the ideal forum for teaching the gospel of Jesus Christ” (General Conference, Oct. 2014; Ensign, Nov. 2014).

"This talk hit a nerve; a painful one," Tanja writes. "President Callister’s talk broke my heart. I never had the opportunity to teach Cory from an early age. Tears pooled in my eyes and eventually spilled down my cheeks. I was angry and hurt by the injustice of our situation . . . I still felt cheated."

But when Elder Jeffrey R. Holland got to the stand, his words put an end to Tanja's self-pity and frustration.

“If we teach by the Spirit and you listen by the Spirit, some one of us will touch on your circumstance, sending a personal prophetic epistle just to you” (General Conference, Oct. 2014; Ensign, Nov. 2014).

That's when Tanja received inspiration to begin creating epistles of her own and send them to Cory each week. "The Spirit softened my heart and told me that I could still teach our son, even in prison," Tanja writes.

That very same day Tanja began writing a letter to her son detailing the basic principles of the gospel and describing the faith that meant so much to her and her husband. She also made sure that every letter included a note to Cory telling him how much she loved him.

"I never could have imagined the blessings that would come from these weekly lessons," Tanja writes. "After the second one, Cory called asking if I could give him more scriptures about answers to prayer and later, repentance. Since then, we have enjoyed many conversations about gospel topics. . . . Sometimes Cory commented on an Ensign article that we had not even read yet—he made us step up our game in reading this monthly gift.

"Not long after I began writing, Cory shared my letters with other inmates who joined him in studying the scriptures. We sent a Book of Mormon and Church pamphlets to a couple of inmates. (They asked for missionaries, but unfortunately, there are no missionaries who serve in that area.)

"In December, he distributed the pass-a-long cards that came in the Ensign. We joke now that Cory is serving a mission in prison."

The Crouches are hoping that Cory will be released this Fall. But, no matter what the future holds, Tanja and Kevin plan on being there for their son.

In an interview with Uplift.com, Tanja shared a memory that speaks of the love she has for her son—and that she will always have.

“One time when Cory was kicked out of school for a week, he ran away. I went looking for him and finally found him with a group of 'troubled teen' friends. I told him to get in the car because we were going home. He was my son and I would always come and find him no matter what he did and where he went.

"That is why, although he is sitting in prison, I have not given up on him. He is my son and I will always go and find him and bring him home because I love him. He is our son forever."

The lives and experience of Tanja, Kevin, and Cory show that when we as Latter-day Saints say a family is forever, that does not just mean our families will endure through time. It means our families—and the love that binds us together—will endure despite distance, heartaches, trials, and even bad decisions.