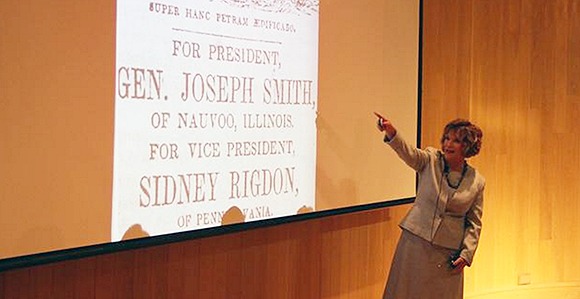 At the Church History Museum, Susan Easton Black gave an in-depth look into Joseph Smith's presidential campaign, something that revealed some interesting facts.

“I sure wish Joseph Smith were running [for president] in 2016,” Sister Black exclaimed near the beginning of her remarks. “He’d get my vote.”

When the Prophet ran for president in 1844, there were 26 states in the union and two major political parties: Whig and Democrat, Sister Black said by way of background.

Prominent national issues included Manifest Destiny—the belief that the United States should extend from the Atlantic to the Pacific Ocean—slavery, and states’ rights.

“An issue that was rearing its head was Mormonism,” she said. “It will not rise to a bigger issue until the 1850s, but there was a concern about what had happened in Missouri and now with the Latter-day Saints in Nauvoo.”