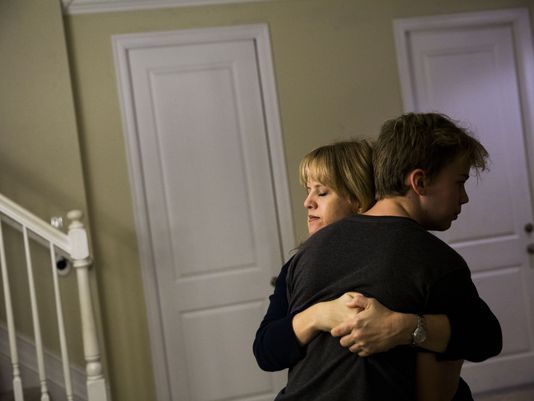 "'I love you, just in case." Those were the words LDS mother Annika Dean received from her 14-year-old son Austin as he hid in the JROTC classroom while a gunman shot and killed 17 people at Marjory Stoneman Douglas High School.

Austin was one among roughly a dozen LDS students at the Parkland school when the shooting began. Austin sent his mother a series of texts describing the screaming, terror, and chaos he experienced, a feeling Annika understands all too well.

The mother of two was at the baggage claim at the Fort Lauderdale Airport in January 2017 when a man opened fire, killing five people.

"I saw the shots being fired," she told TODAY while describing the harrowing event. "I immediately ducked behind a smart cart and I just laid there. There really wasn't anywhere to hide. I couldn't have escaped. I couldn't have run."

During this harrowing event, Annika says, "I was praying to God the entire time that my children will not lose their mother. The gunman was walking around and he was shooting people near me, and I thought I might be one of his victims."

That's when something unexpected but miraculous happened. "An older gentleman laid on top of me and said, 'I will protect you,'" Annika remembers.

Since that time, Annika has made a point of teaching her sons how to protect themselves during an attack. "I have talked to my kids, sometimes when we're walking through grocery stores," Annika told CNN. "I've asked them: What would you do if this happened? Where would you go? Where would you hide?"

Little did she know a year after the airport shooting her son would survive the Parkland shooting. “This was worse than being at the airport, knowing my son was in that situation and there was nothing I could do,” Annika told Naples Daily News.

About her family's experience, Annika told CNN, "It's incredibly rare. My brother said you're either one of the luckiest or the unluckiest, and I said it's both. It's both."

In telling their story, the Deans recognized those who didn't survive. “We’re both mourning. He lost two friends he’s known since the second grade. He’s not gonna bounce back from this right away,” Annika told Naples Daily News. In addition, some of Annika's best friends lost children in the shooting.

Among the victims of the shooting are LDS members: 14-year-old Alaina Petty,  who lost her life in the shooting, and 17-year-old Madeleine Wilford, who has undergone several surgeries due to injuries but is now stable.

To help donate to the families, visit Alaina Petty and Maddy Wilford on Go Fund Me.

Mormon Life Shooting FloridaShooting,Florida,Mormon Life
Comments and feedback can be sent to feedback@ldsliving.com