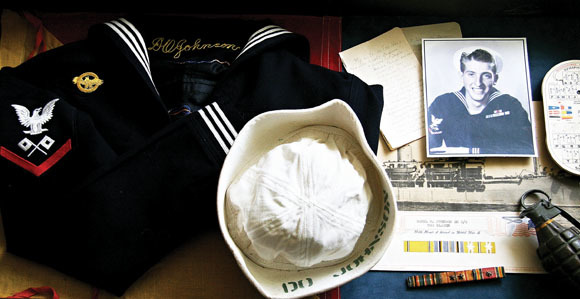 "I picked up a stretcher and went around the beach picking up dead GIs. A bulldozer would dig a big hole, and we’d lay the bodies in there. The corpsman would take one dog tag and put it on his ring and leave the other tag on the body," Brother Darel Johnson recalls with tears in his eyes. “At night we slept on our bloody hammocks.”

The following story was shared on LDS.org in 2013.

On a cool day on the Pacific Ocean in 1946, a young sailor, Darel Orval Johnson, celebrated his 20th birthday—twice. His ship, a troop transport, was ferrying marines a few months after World War II finally came to an end. Busy with his duties as a U.S. Navy signalman, he didn’t blow out any candles or open any gifts, but he did note that because they had just passed the international date line, the calendar remained February 1.

Now 87 years old with gray hair and a gentle smile, the former sailor recalls that milestone with particular fondness. “That’s always been special to me,” he said with a chuckle.

Maybe that’s because it was a miracle he lived to see February 1, 1946. Nearly one year before, he was 19 years old and standing on the black beaches of Iwo Jima, the site of one of the deadliest battles of the Pacific Theater of the war.

Sitting in his apartment recently in Logan, Brother Johnson, a member of the Pioneer Branch, North Logan Utah Stake, looked back 68 years. On the floor beside him were remnants of his old U.S. Navy footlocker with a still-pressed blue uniform decorated with two battle stars, one for Iwo Jima and one for Okinawa. When asked about the significance of his 20th birthday, he responded simply, “I’ve been well blessed.”