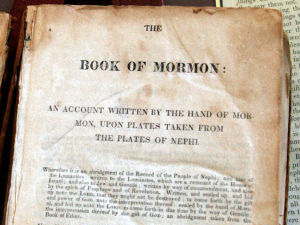 What a priceless possession--and not just because of its monetary value.

A woman from Southern Illinois can keep a rare 1830 Book of Mormon worth tens of thousands of dollars despite filing for bankruptcy, a federal appeals court in Chicago said Thursday.

A bankruptcy trustee sought permission to sell the book, which Anna F. Robinson found while cleaning out a library in Anna, Ill., about 100 miles southeast of St. Louis, to help pay Robinson’s debts of $23,000.

But Illinois law exempts “a Bible” from the items that must be sold to pay debts.

After filing a Chapter 7 bankruptcy in 2013, Robinson wasn’t sure that the exemption covered valuable bibles. A trustee said that because she had other copies, both electronic and on paper, it did not.

Read the rest of this story at stltoday.com