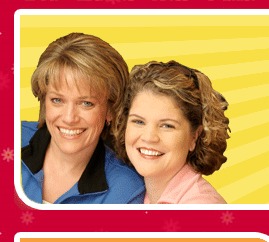 In 2005, LDS moms Gretchen Volgelzang and Paige Heninger hosted the first show of the podcast Mommycast. The show was one of the first parenting podcasts in the podcasting universe and became a popular online discussion forum for moms on the go. In just six years, the show has earned a place on Babble.com’s top 50 Mompreneur’s list, and has gained an audience of over 1.2 million.

“The tagline of our show is ‘Holding the world together, one child at a time,’” Volgelzang said. “Paige and I have always thought that moms everywhere want the same thing for their children: they want them to be healthy, happy, successful and safe. We really believe that the way moms raise their children can influence the world, . . . so being able to pull the world together in a commonality is something that I think is really cool.”

As the Mommycast audience grew, the show expanded to include Mommycast Latina, hosted by Alejandra Rodriguez-Stuart. “We noticed that there seemed to be a tremendous void in wholesome content for the Latina crowd on the internet,” Volgelzang said. “The family values that we discuss on Mommycast are values that all moms share, and so there is no reason why we should limit our shows to an English-speaking audience only.”

Mommycast Latina differs from Mommycast not only in the fact that it is hosted in Spanish, but it discusses Hispanic culture and traditions in addition to the motherly advice given. It is not only catered toward Hispanic mothers living in the U.S., but it extends to Hispanic moms living in other countries through iTunes Latin America.

Mommycast Latina’s large following has marked the beginning of international expansion for the podcast. Mommycast is in the process of creating shows for other non-English speaking countries with hosts who are native to that country. This worldwide expansion is more than Volgelzang and Heninger could have ever imagined when the show began and they see this international growth as a means of fulfilling the overall mission of the show.

The success of Mommycast is largely due to its content; it is not your typical parenting advice show. The topics on the show range from potty training to iPads to film and book reviews. “We talk about things that moms face, so that we can discuss those issues and get advice on how to become better mothers and people for our children, but also through our content we discuss things that are going on in the world now,” Rodriguez-Stuart said.

One of the topics that the podcast covers regularly is internet safety. Volgelzang and Rodriguez-Stuart both assert that “there are at least ten shows dedicated to internet safety. We believe parents cannot have their heads in the sand when it comes to internet with their children and the only way that they can do that is to be online, too.”

Another aspect of Mommycast’s success is the mobility and flexibility that it offers moms on the go. “A majority of our shows are downloaded between the hours of 10 p.m. and 2 a.m., and that is when moms have time,” Volgelzang said. “So the trend has taken on and it really boils down to people are busy, but they want certain content, how they want it, and when they want it.”

Rodriguez-Stuart added, “People are already on the internet a lot of the time, so it is easier for them to go find something at the tip of their fingers. With radio or TV, sure, there is Tivo where you can pause it, but a lot of it you can’t pause and come back to, but podcasts are perfect in that aspect.”

The conversational feel of Mommycast creates a support group among moms and helps them to feel included in the discussion and to have a constant connection with other moms in the midst of their busy lives. Mommycast and Mommycast Latina are currently available as podcasts and videos on mommycast.com, iTunes and Tivo. If you are looking for a quick, helpful tip on a parenting issue, the videos are short and to the point, but provide useful information.