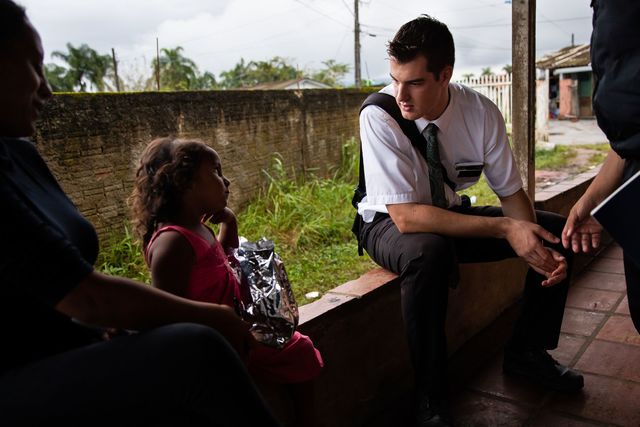 Most Stanford quarterback hopefuls don't take a two-year break after high school. But Elder Tanner McKee is not like most college football recruits.

Mckee, a Division I athlete, is currently serving a two-year mission for The Church of Jesus Christ of Latter-day Saints in Brazil, despite offers from renowned colleges like Alabama, Texas A&M, Texas, and more.

“I thought it was awesome that he has that type of commitment to his faith. Tanner is a great athlete and a tremendous human being. As a coach, you wish you had 100 of those types of guys every year,” he says. “He’s left a lasting impact at Centennial on the way to lead and the level of commitment he’s shown to the game and his faith. It’s pretty rare these days, especially with a player of his caliber in terms of recruiting rankings.”

In all, McKee had scholarship offers from more than 30 schools, including his church’s school, BYU, and many of the most prominent Power Five programs in college football. He took official visits to Texas, Texas A&M, Alabama, Washington and Stanford. McKee’s family joined him on the recruiting trips and Tanner frequently discussed his impending decision with his parents.

On his official recruiting visit to Alabama, McKee went to coach Nick Saban’s house for breakfast and rode on his boat.

“Nick Saban called and offered him,” Jeremie says. “He knew Tanner was going on a mission. When we met in Nick Saban’s office, he said he was totally fine with it. He said he didn’t know a lot about missions, but that he would do a lot of research and help educate himself. He said, ‘We have no problem waiting for you.’”

At Stanford, McKee met and chatted with former Secretary of State Condoleezza Rice.

No schools attempted to talk him out of doing a mission, but one Southeastern Conference school would call periodically to see if he had changed his mind.

According to Jeremie McKee, Texas coach Tom Herman said on a recruiting visit to Austin, “Tanner, you’ve made Texas history. To my knowledge, you’re the first kid we knew was going on a mission that we’ve offered in more than 100 years.”